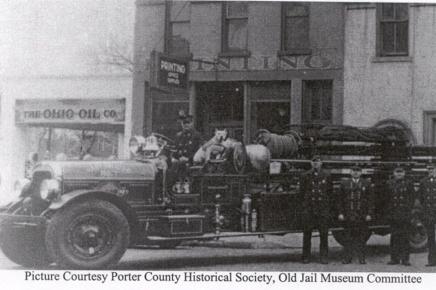 Dogs, as mascots, have been a Valparaiso Fire Department traditions for years.

When the department received its first motorized unit, its faithful pal was "Stubby". There were dogs before that, including one whose name has been forgotten, who lived in a stall with a fire horse called "Old Charlie".

Joe was an English Bull Terrier, large for his breed, but possessed of a pedigree that would have admitted him to any highbrow dog show. He had a progeny that was both large and impressive.

He was a special character in the Gentry Show, being allowed to live in the stall of "White Molly," the sweet-tempered, broad-backed mare that loped around the show ring with a group of dogs on her back. Molly and Joe were inseparable.

One winter night Molly died in her stall at Terre Haute and Joe was inconsolable. On a cold wet night the Gentry organization buried Molly in the Barren Ground at the winter quarters. Joe stood guard all night at the Mare's grave and from that day he became a victim of rheumatism.

He was about seven years old when Molly died, only reluctantly could be persuaded to do his act with the new horse. Then too, he had growing difficulty in jumping onto a horse's back. Age and rheumatism, and maybe indifference, made it necessary to put a new star in the act, but Joe didn't seem to mind.

One Midsummer Day, in 1935 while the Gentry Brothers Show was appearing at the Fairgrounds, Pros. Delvoe came down the road towards town, asking for a veterinarian. Old Joe was following closely at his heels. Pros. Delvoe was the producer of the bareback riding act and had been asked to get Old Joe a free pass to the Heavenly Show. He was too old, too rheumatic to travel with the organization and couldn't do his act anymore. There was a fireman living at Wolffs Comers who was just about to go on duty. He and Old Joe immediately struck up a friendship. The result was that the dog didn't get his pass to the hereafter of dogdom. Instead he willingly and almost intuitively turned to the fireman, and was ceremoniously given to the Valparaiso Fire Department by Pros. Delvoe.

With an understanding sometimes vouchsafed to man's best friend, Old Joe climbed into the fireman's car and was taken down to the firehouse, where he was introduced to the crew. That's the way Old Joe the circus dog became the Valparaiso Fire Department's mascot-a position he held for three years. For quite some time Old Joe was able to climb up to the driver's seat and ride to the fires. He learned the alarm above all other noises and was the first to respond. In time he couldn't make it, so he would go to the fireman's cot by the alarm and occupy it until the equipment returned.

One time in the summer of 1936, H. H. Wood's Fanney-May was expecting a blessed event, and Miller being on the sick list, asked the fireman to give the dog a blanket and a box, and look after her during the days of expectancy. Old Joe wasn't exactly pleased with the arrival of another dog, but he was a gentleman, so Fanny-May came to share the attention of the fireman. She presented the world with eight fuzzy brown pups, all pure mongrel, but as lovable as all tiny animals. When weaning time came, she and seven of the pups went back to the mill. A solid brown pup was accepted as a gift by the fireman and he was named Little Joe.

Old Joe and Little Joe got along well enough and any unduly venturesome street dog who attempted to worry the little brown pup was driven off by Old Joe. Little Joe learned the routine of the Fire Department as he grew up.

Than came a time when the old dog found life hardly worthwhile. Asthma was an affliction added to his rheumatism. Then the Vet took him to the animal hospital and gave him a gentle exit. The Vidette-Messenger published his picture and gave him a nice obituary. His heavy, brass-studded harness went on a hangar, as a memorial, like the displayed badge of a fireman or policeman killed in the line of duty. So Little Joe became the next department's mascot. One night in August the little brown dog went out to sniff the air and discovered a new attraction in the atmosphere. Curiously and irresistibly he followed a beguiling call. The Fire Department was forgotten.

Chief Hal Clinedinst and Asst. Chief Wilber Cowdrey began a search for their mascot. They believed that someone had enticed him into a passing automobile, for the little dog couldn't resist an invitation to go for a ride. The Vidette-Messenger published an article about the missing mascot. On August 28 came word that the dog was courting a lady-friend at Amos Martinal home at the southeast end of Sager's Lake. So Mrs. Ann Cowdrey drove over and Little Joe was overjoyed to see her.

About his experience he had little to say. Chief Investigator of the department Clarence Osbom couldn't make any headway. He couldn't assign any motive for Little Joe's absence unless, it was puppy love. There have been several Fire Department mascots in Valparaiso, each finding a niche of his own in the affections of the fireman, and, like Old Joe, the Circus dog, who got a three year reprieve because he immediately became friends with a fireman. In addition to the picture that appeared in the Vidette-Messenger when Old Joe died, there is an illustration in the museum of Gentry Heralds and hand bills that show the big, white dog riding on Molly's back, standing up on his hind feet, and surrounded by a quartet of small Fox Terriers.

(Editor's Notes - 632nd in Porter County historical series, based on fact and legend as compiled by local journalist.)