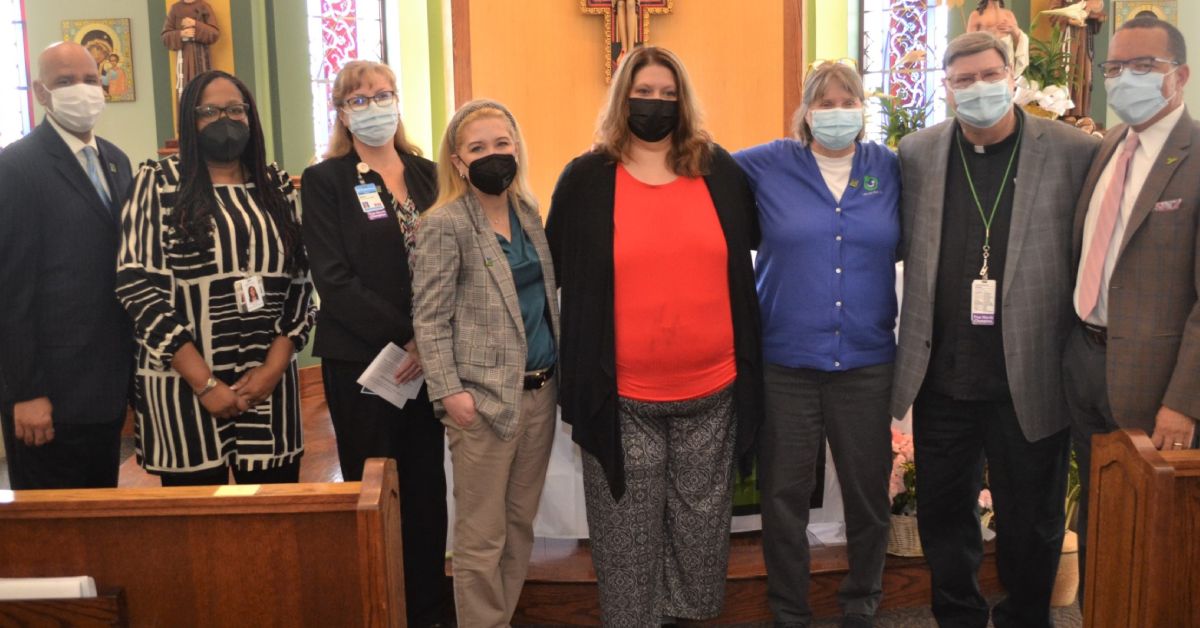 One spoke about how a mother who was slain while protecting her family gave her another chance at life. Another told how her late husband’s gift impacted the lives of more than 200 others.

The shared stories of organ donation highlighted Franciscan Health Crown Point’s Donor Remembrance Celebration on Friday, April 29, in honor of National Donate Life Month. After the program, Mass and donor remembrance in the hospital’s Corpus Christi Chapel, a donor registration drive was held at the hospital cafeteria. The day was designed to raise awareness and promote organ donation as more than 1,000 Hoosiers and 100,000 people nationwide await lifesaving organ transplants.

Kelly Asbell of Valparaiso began her remarks by having those in attendance take a deep breath. She then recounted her life spent with cystic fibrosis. Kelly beat the odds by giving birth to twins and celebrating her 40th birthday. But shortly after that celebration, she ended up in the hospital with her lungs failing. She was given just 48 hours to live.

From her hospital bed she saw a news report about a mother who took her daughter to play in a nearby park and died shielding her daughter and boyfriend from a stray bullet. She didn’t realize that this mother who lost her life would save hers. “On that day, she saved my life, her boyfriend’s life, her daughter’s life and 16 other peoples’ lives. And I’m the one that got her lungs,” Kelly said.

After waking from her surgery, Kelly says she kept hearing the Frank Sinatra song “Fly Me to the Moon.” Later, she received a letter from the mother of her donor, Tracie, and found out that she would sing that song every night before bed to her little girl.

“Donation isn’t about death. It is about life. And I am living with Tracie now by my side,” Kelly said. “Because of her choice to be a donor, I get to share every day the beauty of what it means to get off your deathbed and get a second chance at life.”

Heather Runyan of Portage shared the story of her husband of 18 years, Dan Runyan, a beloved science teacher at Grimmer Middle School in Schererville. On Jan 30, 2018, Dan had a cardiac event after a run with the middle school running club and was rushed to the hospital. Two days later, he died at age 45 from sudden cardiac arrest.

“It was devastating, and our world was completely shattered,” said Heather. Suddenly, she had lost the love of her life and their daughter, Avery, and son, Cole, had lost their father.

Later that day, she received a phone call from Gift of Hope reminding her that Dan was a donor and eligible to become a tissue donor, but they had just an 18-hour window to retrieve his donations. “I knew that that’s what Dan wanted to do. I knew that donation was his wish, even before we were married. He couldn’t imagine being buried with the vital and precious gifts that could be shared with others.”

Heather said she would never forget the comforting 20-minute phone call with the Gift of Hope representative. He made sure she was comfortable proceeding with the most difficult and obtrusive questions, which were mandated to determine whether or not Dan would be a donor.

“I’m not sure that I will ever get over the loss of the love of my life, but because he lives on in so many others, I have been able to navigate and find a new normal,” Heather said. “Through donation, he’s still living in a way.”

Harry Wilkins, CEO of Gift of Hope and a retired trauma surgeon, said the organization has a goal of signing up 30,000 new donors. He asked that people do three things: 1) If you are not, consider signing up for the donor registry; 2) Having made the decision to be a donor, share that decision with your family; and 3) Get the facts on organ donation by going to giftofhope.org.

Terri Tibbot, CEO of Life Line Stem Cell, explained how the donation of cord blood, umbilical cord and placenta after the birth of newborn babies contributes to regenerative medicine, helping treat more than 80 diseases. Most recently, the FDA has approved its use in treatment for leukemia and lymphoma. “We are really excited about the things we are going to see,” she said.

Mike Henderson, professional services coordinator at VisionFirst and a kidney transplant recipient himself, noted that last year, VisionFirst was able to provide more than 1,900 corneas for transplant and nearly 850 of those were transplanted in Indiana. “As a donation professional and as a kidney transplant recipient, I would definitely like to thank the staff at Franciscan Health Crown Point for their tremendous support of organ, eye and tissue donation,” he said.

Those with questions about organ donation, can find answers online at DonateLifeIndiana.org/About-Donation/FAQS/. The website includes a link where people can sign up to be a donor.