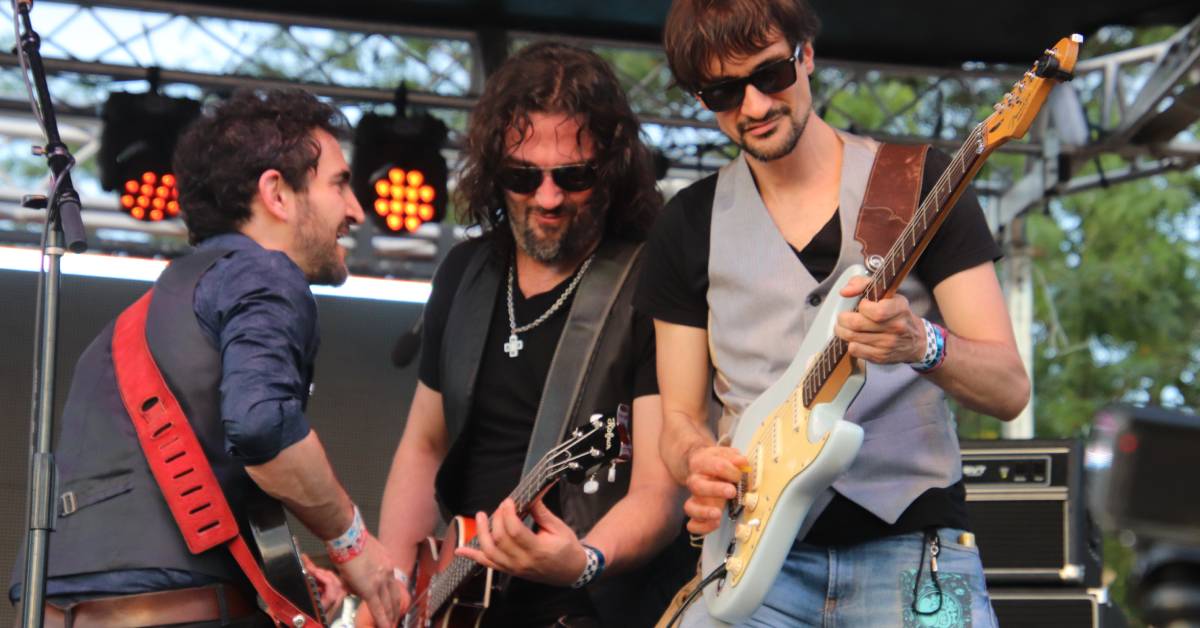 Downtown Hammond was brimming with tie-dye and peace signs Saturday during the 14th Beatles Fest. The annual favorite, which has grown from a barroom concert for 50 into a family-friendly event that takes over a city block, followed the first ever Cold Roses Craft Brew & Music Fest.

Charrel Jordan and her friend came all the way from Chicago to attend both events, saying, “We’re having a whole Hammond weekend!”

Jordan’s previous experience with Hammond was limited to driving her grandmother to the boats. She was impressed with both festivals and contrasted her experience with those of Chicago street festivals.

“In Chicago, events are so crowded and expensive and you pay for everything,” Jordan said. “Here, we got free parking and there’s a lot of people, but you’ve still got breathing room. The beer and food are good and for a great value.”

Jordan grew up listening to the Beatles and was excited to see Diego Souto & The Revolvers play, as they traveled to the fest all the way from Argentina.

“That’s the beautiful thing about the Beatles,” Jordan said. “They transcended genres, races and even languages. They were a great band.”

Mikey Caraza of Hammond had great things to say about the Beatles as well and has attended the event all 14 years. This year, he brought his brother, who had never made the trip before.

“I love the Beatles so much that I’ve seen forty-eight different Beatles bands,” Caraza said. “I love that they have this in Hammond because it makes it easy for me to come every year.”

Caraza had just returned from a trip with his sister to Liverpool, where he saw Strawberry Fields, crossed Abbey Road, and showed off the business card he picked up from the barber shop on Penny Lane.

The music of the Beatles has made a lasting impression on so many people from so many parts of the world. As mentioned, Diego Souto & The Revolvers came from Argentina and broadcast their set live back to their hometown fans. In a clever ploy to grow their fanbase, Diego did a t-shirt giveaway to a lucky Beatles fan who heeded the call to follow the band on Instagram.

Headliners The McCartney Years traveled to the fest from London, Ontario, Canada.

“I grew up listening to the Beatles because my dad would play them all the time,” said John Vezmar of Downtown Hammond Events, the community-oriented group that counts Beatles Fest as their biggest event of the year. “It’s really grown so much, and now we’re bringing in bands from all over the world. It’s just a testament to how iconic the Beatles really are.”

Hammond Beatles Fest has something for everyone. The beer tent boasts a varied tap; the starts with festival favorites like nachos and beef sandwiches and finishes nicely with a wide selection of funnel cakes.

There was a gentleman juggler on stilts. There was face painting for kids ages 1 to 101. There were bouncy-houses. And of course, there was great, timelessly familiar music.

The Neverly Brothers taught a class during their set, not only playing Beatles tracks, but supplementing each song with a setting-of-the-scene as rock and roll developed from America, to England, to Germany, then exploding into the mainstream when the Beatles played the Ed Sullivan Show. They expanded the library to include contemporaries and round out the growing sense of excitement for an idea that younger generations might take for granted: rock and roll is here to stay.