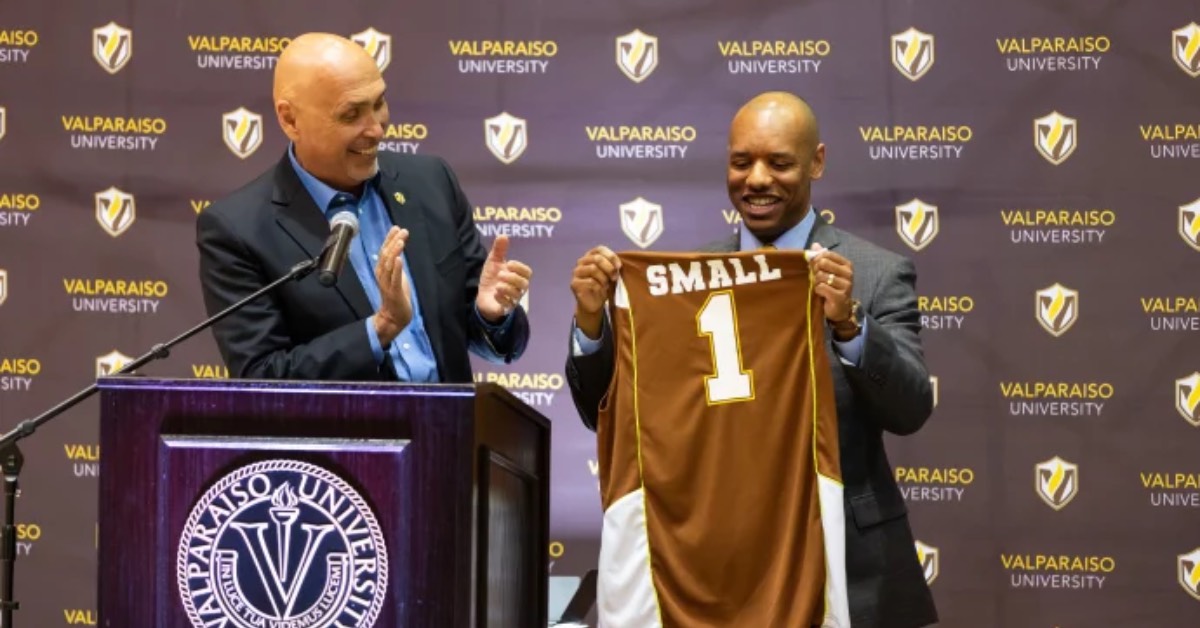 Moderated by Assistant Director of Athletics for Media Relations Brandon Vickrey ’16, ’20 M.S., this virtual session encourages participation and will feature both pre-submitted and live questions for Dr. Small. This event will take place virtually over Zoom. Attendees will receive the link to join the call upon registration, and are invited to submit questions in advance as they register. Click here to register or for more information.

Did you register but can’t locate the confirmation email with the link? Check your updates, promotions, and spam folders for an email from alumni@valpo.edu. Let us know if you can't find it!

A dynamic rising star in collegiate athletics administration with a focus on the holistic student-athlete experience, Charles Small, Ed.D., started his role as the Director of Athletics at Valparaiso University on July 1, 2022.

In addition to overseeing all aspects of the Department of Athletics, Small serves as the sport administrator for men's basketball as well as men's and women's track & field and cross country.

Through his total commitment to the student-athlete experience — an experience he enjoyed firsthand as a Division I men’s basketball player at the University of Pittsburgh — Small’s work in intercollegiate athletics has unfailingly enabled student-athletes to reach their full potential — in competition, in academics, in service and in career attainment.

Small joined Valpo from Iowa State University, where he spent four years (2018–2022) as Senior Associate Athletic Director for Student Services. In his role at Iowa State, he was the lead administrator for sports medicine, compliance, strength & conditioning, former student-athlete relations and academic support services for student-athletes. Small served as sport administrator for the Cyclones’ men’s basketball and wrestling programs.

A key member of the Iowa State athletics senior staff, Small headed up the department’s diversity, equity and inclusion strategic action plan. During his time with the Cyclones, he created a student-athlete and letterwinner engagement unit, as well as a position for a mental health and educational enrichment coordinator.

Small’s dedication to building campus partnerships was highlighted when Iowa State University President Dr. Wendy Wintersteen appointed him as the University’s Interim Vice President for Diversity, Equity & Inclusion for the fall 2021 semester. He is also a Deputy Title IX Coordinator and represented the athletic department on the ISU Well-being Leadership Alliance.

Prior to arriving at Iowa State, Small worked for four years (2014–2018) at the University of Arkansas. He ended his tenure with the Razorbacks as the department’s Associate Athletic Director for Academic Services, where he served as lead administrator for academic support services for student-athletes and as a member of the athletic department’s executive staff. He also worked as a Deputy Title IX Coordinator on campus.

Small originally joined the staff at Arkansas as Director of Student-Athlete Development. He was a member of the Office of Student-Athlete Success (OSAS) leadership team, overseeing the day-to-day operations of the student-athlete development program and serving as advisor for the Razorbacks’ Student-Athlete Advisory Committee. He represented the athletic department on the RazorCAT team, collaborating with units in the Division of Student Affairs to discuss student issues and wellness concerns. He was promoted to Assistant Athletic Director in 2016 before earning his promotion to Associate Athletic Director in 2017.

Prior to his tenure at Arkansas, Small worked at the University of New Orleans (2013–2014) as Assistant Athletic Director for Student-Athlete Enrichment. While at New Orleans, he oversaw academic support and life skills programming, was the sport administrator for men’s and women’s track & field and was the lead administrator assisting the athletic director in developing a strategic plan.

Small started his work in intercollegiate athletics at his alma mater, the University of Pittsburgh. He ascended to Academic Counselor for Football and Women’s Track & Field (2010–2013) after spending time as Assistant Director of Life Skills (2007–2010) and as a Graduate Assistant for Student Life and Compliance (2006–2007).

In addition to his athletics work, Small has served as an adjunct faculty member in the School of Social Work at both Pitt and Arkansas. He is currently a member of the National Association of Academic Advisors for Athletics (N4A) and the National Association of Student Personnel Administrators (NASPA), and he is a graduate of the NCAA Dr. Charles Whitcomb Leadership Institute and the Sports Management Institute.

Small also worked with two nonprofit organizations in Ames, Iowa. He was a member of the foundation board of trustees for Youth and Shelter Services (YSS) and a member of the board of directors for the Assault Care Center Extending Shelter & Support (ACCESS).

Small earned his Doctor of Education from the University of Pittsburgh in 2013 after previously receiving his Master of Social Work (2007) and his Bachelor of Arts in Social Work (2006) from Pitt. As an undergraduate at Pitt, Small was a four-year member of the men’s basketball program, earning three letters. He was part of teams that advanced to the NCAA Tournament four times, including two appearances in the Sweet Sixteen, and won a pair of Big East championships.

Small is the 16th Director of Athletics all-time at Valparaiso University and just the third person to fill that role in the last 43 years. A native of Detroit, Small and his wife, Celeste, have two sons, Dominic and Aiden.