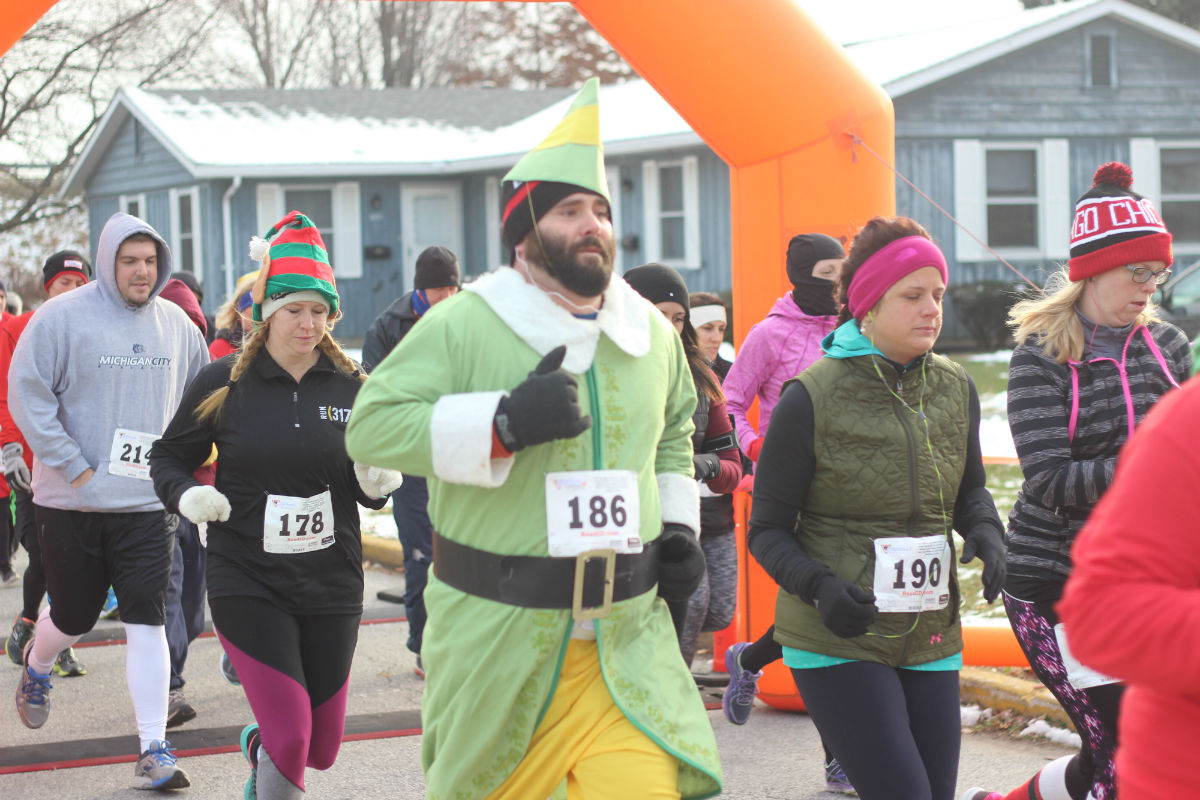 The race was the finale of a five-part series, which began in October of 2015 and took place in each of the five areas that the Duneland Family YMCA supports. From start to finish, the series formed a healthy community of runners that all support the YMCA’s mission.

“The whole series was outreach to the community,” said race director Ashley Hall. “We went to every town in the community, trying to show that the YMCA isn’t just for Chesterton. It’s for Dune Acres, Beverly Shores, Burns Harbor, and Porter. Everyone has been having a blast.”

Both new and veteran participants joined Hall at the Duneland YMCA Saturday morning for a race that celebrated not only the end of the series, but also the holidays. Santa Claus was there, ready to take photos, and a costume contest brought out the Christmas spirit in everyone.

“Every race has grown,” said Hall. “Everyone is really excited about it. I get emails and phone calls from people asking when the next race is. We’re really excited about what we’re doing here. This race definitely shows that the YMCA is for all, which is our mission. We like to serve for all. Most races have a specific group of runners that they target, but we are trying to reach everybody outside that group. We have a lot of runners that have never run a 5K or a 10K, so that is really exciting.”

Family members and YMCA volunteers were also able to enjoy the event, cheering on the runners as they battled the winter cold.

Duneland YMCA CEO Dave Kasarda said, “Any opportunity we have to get people together and to support the community and to further healthy living is part of our mission. We have had runners join us for all five of the races. Obviously people are having fun and supporting our cause. This race is unique, and I think that you have to make it different when there’s so many different races every weekend.”

Thirteen runners who had participated in all five races of the series were specially recognized after the race. Among them was Chesterton native Shannon Donnelly, who ran her first 10K to finish off the series.

“I am here at the YMCA probably three or four times a week going to various classes or just working out, and I’ve gotten to know some of the instructors that are leading the races,” said Donnelly. “I’ve done a lot of 5K’s and 10K’s out in Chicago, but I was so excited to see one in my neighborhood. The courses have all been really nice. I also know a lot of the people who are here. It’s a nice small race. It’s a more intimate feel, and I get to see people I see at the YMCA all the time. It’s much more of a community feel than larger races where you just get lost in the crowd.”

For more information on the Duneland Family YMCA, click here.