The fully-operational R2D2, that could move and make the same sounds as the unit in the movie, mesmerized Chesterton Middle School students recently. He shared with the students how he planned and researched for six months before he built the replica over a period of two years with no more than creativity and basic parts that anyone could buy in a hardware store or online. His research involved studying George Lucas’s actual blueprints of R2D2. Treble has also built a Star Wars E-11 Blaster Rifle and a Stormtrooper Helmet.

Treble came to the school to speak with students about his use of computer-aided design (CAD), geometry and software programs to create and build R2D2 and other Star Wars gear. He also talked about how he really did not know what career he wanted to pursue when he was younger, but mechanical background and experience led him to where he is today. Treble is presently a chemical engineer with Praxair, Inc. Prior to his present job he was a mechanic working on fighter jets in the Air Force and for American Airlines after that. He told the students that he loves to work on cars, another one of his hobbies.

He is also a member of the 501st Legion Club, an all-volunteer organization of costume enthusiasts seeking to promote interest in Star Wars. The organization also puts its resources to good use through fundraising, charity work, and volunteering. Treble enjoys sharing his work with the students and helping them to see how science, technology, engineering and math can impact their future.

WDSO Officially Back On-Air After Labor Day
Chesterton High School’s Radio Station, WDSO-FM 88.3, will resume its regular programming on Tuesday, Sept. 5 at 6:00 a.m. This marks the 41st year of broadcasting for the station. WDSO serves the Duneland School Corporation and the entire Duneland community. Check out WDSO’s Daily Schedule in the Chesterton Tribune for shows and their broadcast times.

For several years now, WDSO has broadcast for 24 hours a day, seven days a week and also live-streams at www.duneland.k12.in.us/wdso. Regular programming will air Monday through Friday from 6 a.m.-4 p.m. Music will continue through the night and on Saturdays and Sundays.

WDSO will continue its daily programming with the following shows: CHS News & Events, Community Bulletin Board, Daily Almanac taken from “Echoes of the Past” from the Chesterton Tribune, Profile America from the U.S. Census Bureau, Birdnote, Insight Daily Radio, On the Money Minute and Soundbeat. Weekly programs include the CHS Weekly Report, Porter County Perspective and the Indiana State Police Road Show.

The WDSO sportscaster will broadcast home games during the regular season for CHS varsity football in the fall, boys’ and girls’ basketball during the winter months and softball and baseball in the spring. Some away games and post-season games will be broadcast as well.

Matt Waters is the station manager/faculty advisor and Michele Stipanovich is the operations manager.

Patrons are welcome to contact the station at 219-983-3777 with suggestions for programming or a with a request for a public service announcement. Information may also be sent to WDSO at 2125 South 11th Street, Chesterton, IN 46304. 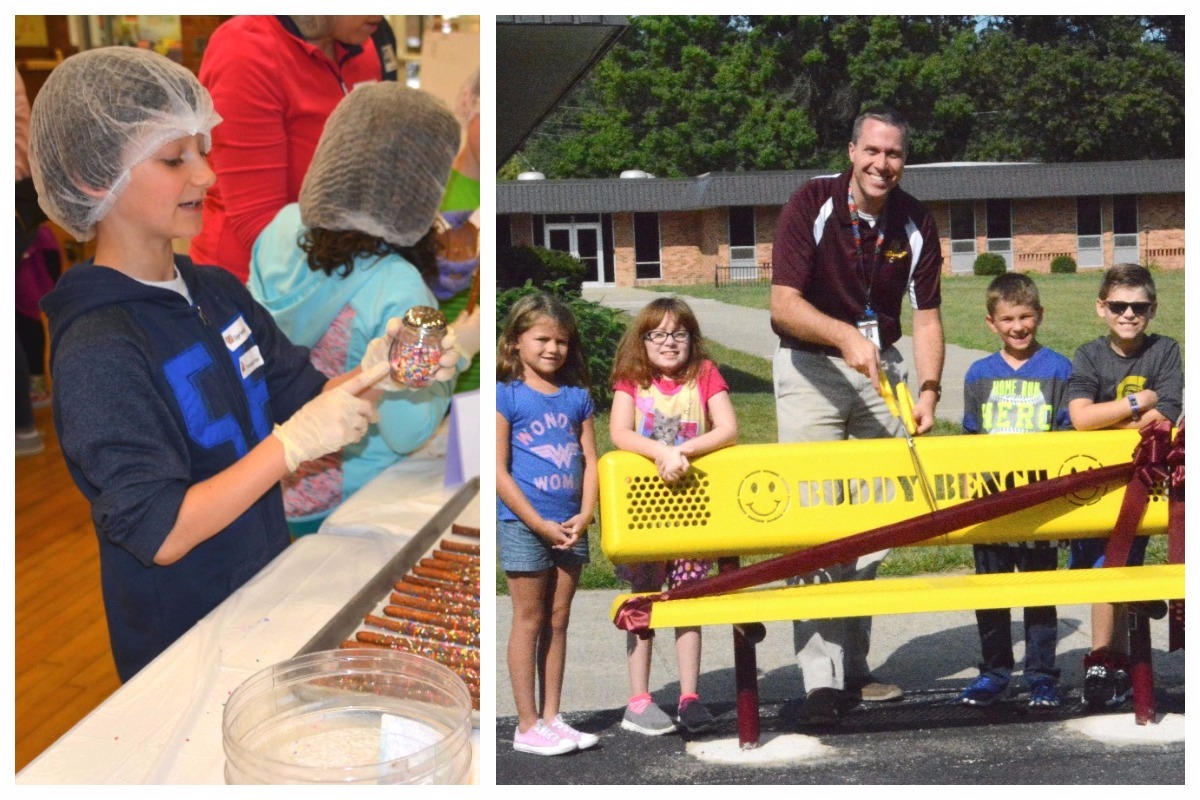 Benches Purchased With Proceeds From Sweet Treat Factory
Bailly Elementary second graders work together in an assembly line to roll pretzels in chocolate and apply the sprinkles with assistance from parent volunteers. As part of an economics unit, second grade students were transformed into real employees for a day while they learned the ins and outs of making chocolate covered pretzels with sprinkles in an actual assembly line at their factory. Proceeds from their Sweet Treat Factory last school year were used to purchase two buddy benches at the school. Bailly had a ribbon cutting ceremony this week to present the new benches. Participating in the ribbon cutting are last year's second graders who participated in the Factory, left to right, third graders Sloane Colburn, Alana Lawson, Principal Kevin Zeck, Hunter Duracz and Logan Weaver.