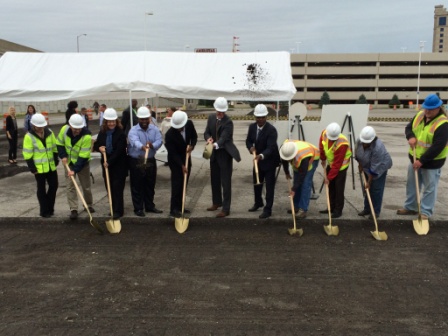 We open 2015 with encouraging news from East Chicago, where the latest RDA-funded Marquette Plan projects are on schedule to be completed by this Spring.

A groundbreaking occurred in October for the project that is expected to enhance the downtown area of the North Harbor District by adding a flower garden, ornamental lighting, seating, green space and a stage area. The construction of a splash pad, improved parking areas, new lighting and the installation of picnic areas are also included in the project.

These improvements are part of East Chicago's Waterfront Revitalization Initiative. The RDA approved a $17 million grant for phase one of the project in November of 2013. Since then, the city has broken ground on the downtown project as well as on the lakefront at Jeorse Beach. East Chicago has also been aggressive about making sure as much of the work as possible stays local, issuing a call for local workers and contractors to get involved.

Making sure that work on projects we fund is done locally as much as possible is why the RDA instituted a "Buy Northwest Indiana" policy several years ago. In our most recent tracking period,from March 1, 2013 to May 31, 2014, more than 85% of the 211 companies working on RDA-funded projects were Northwest Indiana firms. Those companies employed 958 workers who earned $1.163 million in wages working on those projects.