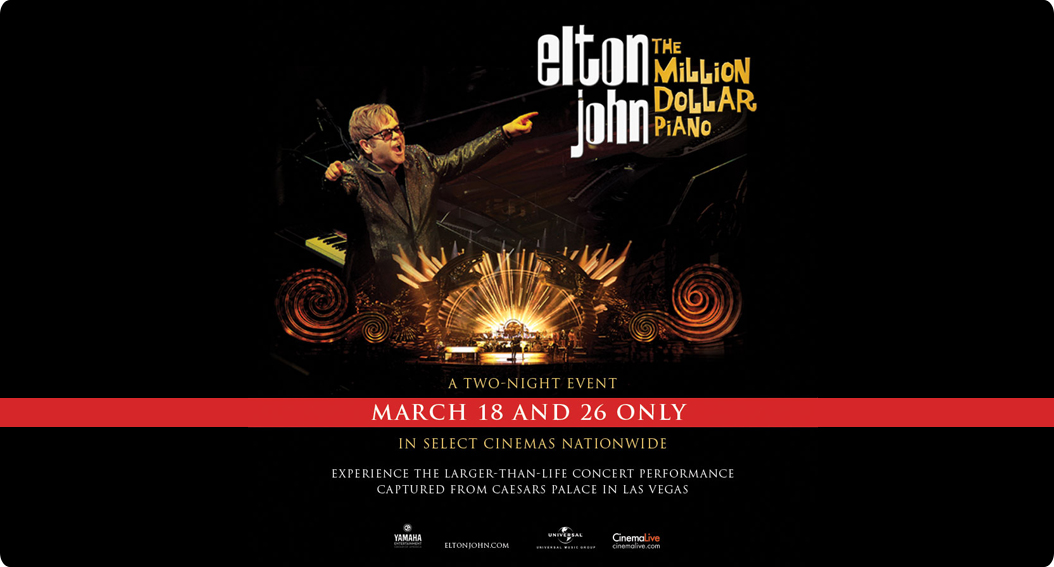 Fathom Events, CinemaLive, and Rocket Music Entertainment Group are ecstatic to bring one of the most highly acclaimed solo artists of all time, Sir Elton John, to select theaters for a spectacular two-night event on Tuesday, March 18 and Wednesday, March 26.

Captured live from his residency at The Colosseum at Caesars Palace in Las Vegas, The Million Dollar Piano features all of Elton’s greatest hits from throughout his legendary career including; ‘Rocket Man’, ‘Tiny Dancer’, ‘Your Song’ and more! At the centerpiece of this larger-than-life concert event, is the show’s namesake piano. Featuring more than 68 LED video screens, this truly unique instrument was created by Yamaha Entertainment Group of America especially for Elton’s Las Vegas residency and took over four years to construct.

In addition to a spectacular concert performance, cinema audiences will be treated to an exclusive behind-the-scenes look at the making of Elton’s celebrated 1973 album Goodbye Yellow Brick Road.

Don’t miss this once-in-a-life time event when Elton John: The Million Dollar Piano comes to a cinema near you!

Click here for more information and to purchase tickets!