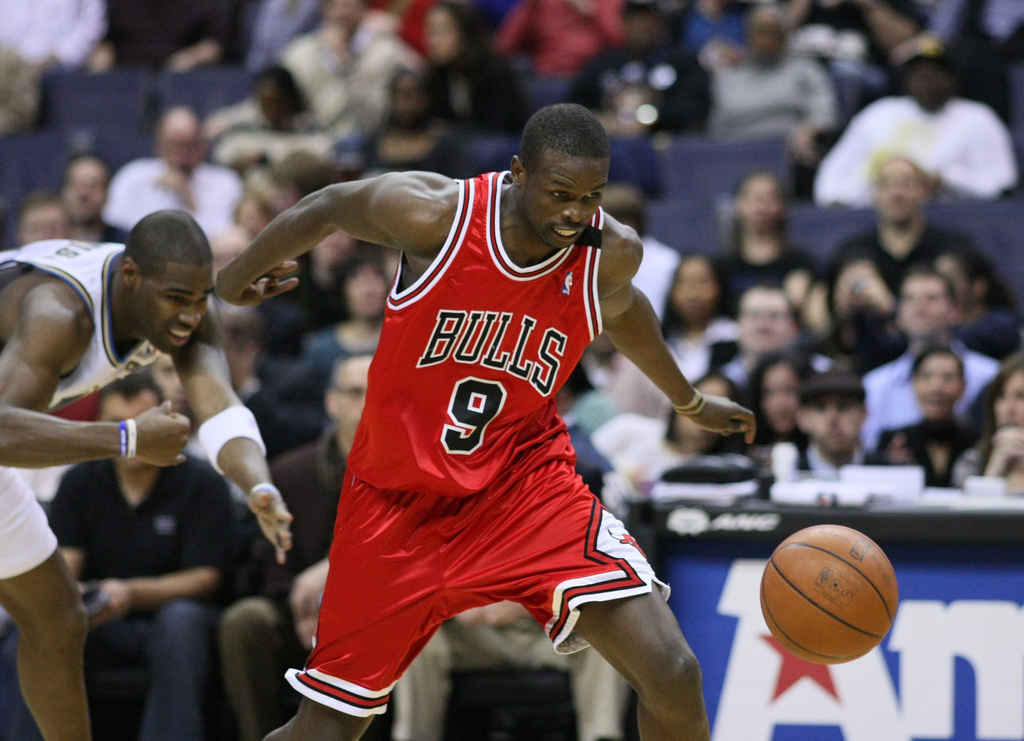 My early morning routine generally consists of waking up, grabbing my phone, and running through my RSS, Facebook and Twitter to get a sense of what went on last night after I went to bed, and and news that broke.

This morning was a different story. Because of the crazy weather, I had to get up, make sure my car would be good to go and leave early enough to make it in to work on time. After a few attempts at getting out of the plowed-in pile I gave up, opting to work from home.

I got everything set up, made a round of posts, fired up Tweetdeck and saw an unusual amount of jokes about the Bulls on my Twitter feed. Then I saw it: “Bulls Send Deng to Cavs for Bynum, 3 Picks.”

Last night, the Bulls agreed to send Luol Deng to the Cleveland Cavaliers in exchange for Andrew Bynum, the rights to a Sacramento Kings’ 1st round draft pick in the coming years (different protections make it complicated), the right to swap picks in the ‘15 draft with the Cavs, and 2nd round picks from Cleveland.

On the surface, the move is terrible for the Bulls this year. Once you get nerdy, it makes sense for the long term. So let’s get nerdy.

First of all, the Bulls they were not going to contend for the title this year without Derrick Rose, so building for the future became the team's top priority. Luol Deng, an impending free agent, declined a more-than-fair contract extension (3 years, $30M) last week, so the team decided they needed to get an asset for him instead of letting him walk after this season without getting anything in return.

Cleveland signed Bynum to a 2-year, $24M contract before the season, with only $6M being guaranteed for the first portion of the deal. The other $18M would be guaranteed if the team decided to pick up his option before 5pm on January 7, 2014 (today!). This option was included because of his… um… colorful history in Philadelphia. He's had issues in Cleveland too and hasn't played well either. So, he’ll be waived today by the Bulls and likely won’t set foot in Chicago, saving the Bulls $6M this year (and technically, $12M next year).

So, Cleveland went all in on Deng and the Bulls got a few assets in return. The Bulls will save nearly $20M on the season, avoiding the luxury tax, the repeater tax, and in turn making the team - currently a sixth seed in the Eastern Conference - bad enough to get a lottery pick in the deep, loaded upcoming draft.

So what does it mean for Chicago, in practical terms? Like I wrote above, they’ll be worse this year. It will be interesting to see how they play out the year with Carlos Boozer, Joakim Noah and Jimmy Butler minutes-wise. Don't be surprised if they sit out longer-than-expected with nagging injuries.

The Bulls will go into next season with some salary flexibility (roughly $7M, ALOT more if they use their amnesty provision on Boozer, getting rid of his $16.8M deal). Some of that will go to sign Euroleague MVP Nikola Mirotic from Spain. They’ll then round out the roster with a couple of draft picks - potentially a lottery pick, and overall the franchise will be set to be pretty strong with multiple lottery-likely draft picks (including the Bobcats’ unprotected pick in 2016, which is always valuable because the Bobcats are always terrible).

As a fan, its disappointing to see a talented, hard working player like Luol Deng off the team. Head Coach Tom Thibodeau has long referred to Deng as the team’s most valuable player, not the former Most Valuable Player in Rose. He is someone who worked hard to became a two-time All-Star for Chicago. He’s been awesome the last few years and someone I truly looked forward to watching on a game-to-game basis because he always brought it. They will have to replace more than just the 19.0 points, 6.4 rebounds and 3.7 assists he contributed each night.

The Bulls have routinely been a fun, gritty team to watch the past few years and Deng has been a big part of that. Let’s just hope that without Deng, they’ll be able to keep that routine intact.