Middle school students gathered in the VHS auditorium November 5 to hear the moving story of Eva Mozes Kor, a survivor of Auschwitz. Eva makes the trip to Valparaiso every year, speaking to 8th grade students of the horrible things she went through and how she survived. Eva announced today that she will only be making the trip to Valpo for 5 more years, making the lecture today all the more special. 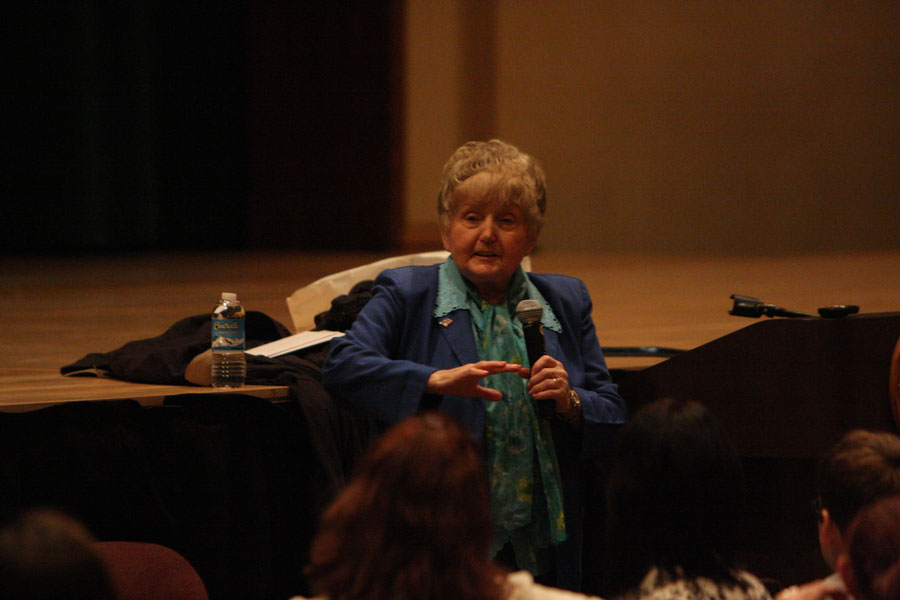 Eva and her twin, Miriam, were treated as test subjects for Dr. Mengele, a Nazi doctor who conducted various experiments on twins. They were taken to Auschwitz in the spring of 1944, separated from their family, never to see them again. “I did not understand why [being Jewish] was a crime,” remembered Eva. Upon arrival at the camp, seeing the bodies of children in their latrine, Eva made a vow, “Miriam and I are walking out of this camp alive.” This picture kept her focused amongst her trials.

She spoke of the labs she and the other twins were taken to every day, labs for experiments, labs where they were poked and prodded and injected with germs, drugs, and things of that nature. At one point, Eva became ill and was told she would die in 2 weeks. Fighting a fever in a barrack with no food and water, unable to walk, Eva fought the illness and was returned to her sister, who would have been killed if Eva had passed.

When the Americans invaded, Eva saw a plane fly low over the camp and renewed her vow to continue to fight for life. After the air raids started, the experiments stopped, the Nazis eventually abandoned the camp altogether, and they achieved liberation.

Eva and Miriam survived the terrible horrors of Auschwitz. Her sister passed on in 1993 from kidney failure, a result of Dr. Mengele’s experiments. Eva has gone on to share her story and the life lessons she learned from her experiences:

Eva has written a book entitled "Echoes from Auschwitz," detailing her story from where she grew up, to her times at the camp.