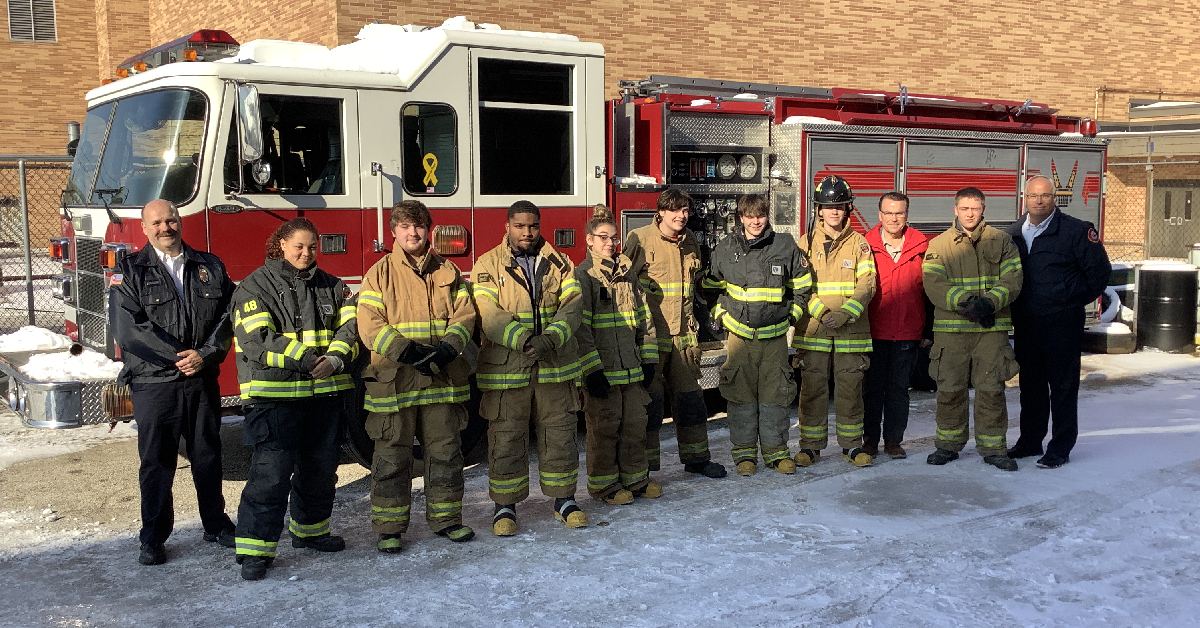 Students from the A. K. Smith Career Center’s Fire Science Program celebrated the donation of a fire truck and other equipment to their program today.

The vehicle, a pumper truck, was donated by the City of Michigan City. According to Michigan City Fire Chief Randy Novak, the truck was brought into service on September 11, 2001. Today, it can no longer pass the certifications required for it to remain in active use, although the vehicle can still be driven and has an operational pump. A.K. Smith Automotive students have already repaired a broken door and stand ready to maintain and repair it as needed in the future.

Tom Thode, who teaches the Fire Science class at A. K. Smith, was thrilled with the donation. “We have had field trips and visits from area fire departments so that students can learn about the trucks,” says Thode. “But this gives us an opportunity to do hands-on training year-round, every day.”

“We are very grateful for the donation of this truck and the other equipment, which is an investment in our community’s future,” said Audra Peterson, Director of LaPorte County Career and Technical Education Program.

Peterson noted that the Fire Science program at the Career Center was established five years ago in response to the growing need for firefighters in LaPorte County. Twenty-six students from Michigan City City High School and other schools across the county are now enrolled in the class, which provides students with both needed certifications and hands-on experience.

Currently, over 500 men and women currently serve as firefighters in Laporte County, both paid and volunteer.

“We’ve seen a downturn in candidates who are interested in careers in firefighting and public safety in general,” said LaPorte Fire Chief Andy Snyder, who was on hand Friday to celebrate the donations. “This program is helping us introduce more students to the profession, building skills that could one day blossom into a career.”