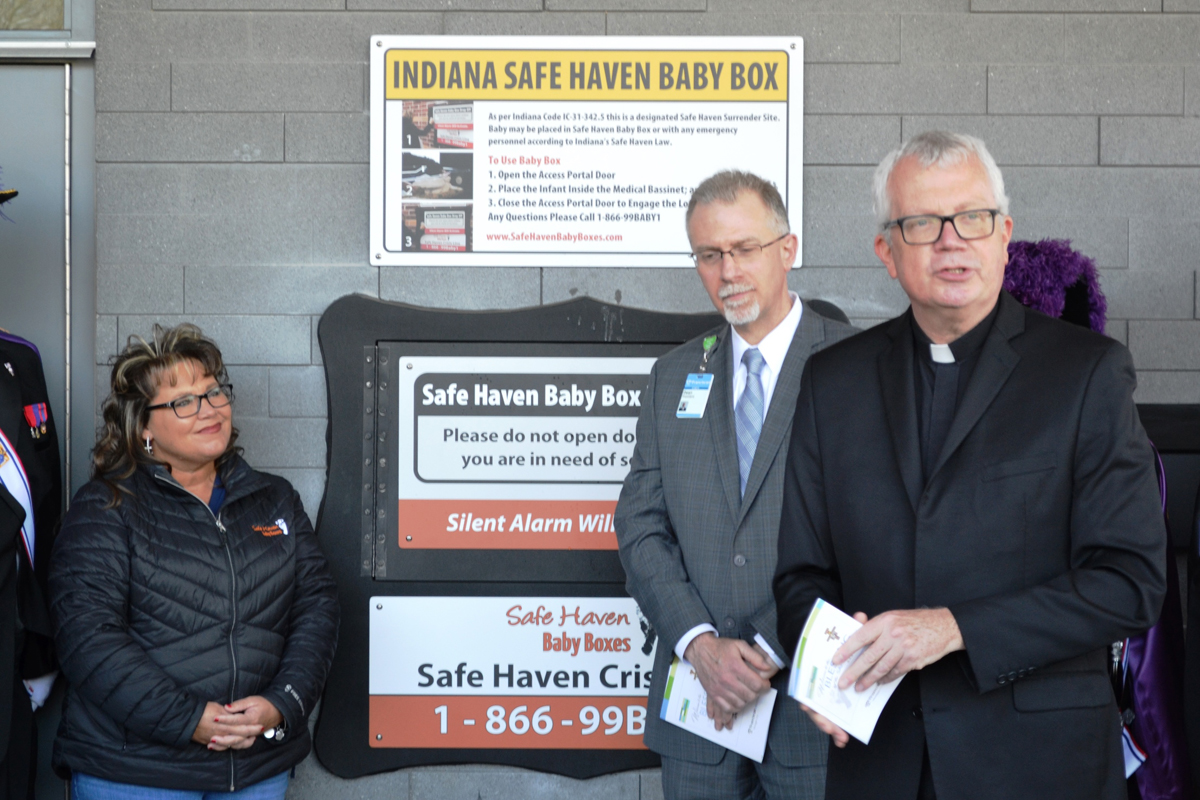 A device for new mothers in crisis, born out of one woman’s experience as an abandoned infant, is now available at Franciscan Health Michigan City, as the Safe Haven Baby Box received its formal blessing on Tuesday.

“We are here to acknowledge that every child is beloved of God,” said the Most Rev. Donald Hying, bishop of the Diocese of Gary, during the ceremony.

“We’re pleased to offer this new service to our community, a service that demonstrates one of our core values: respect for life,” said Franciscan Health President/CEO Dean Mazzoni. 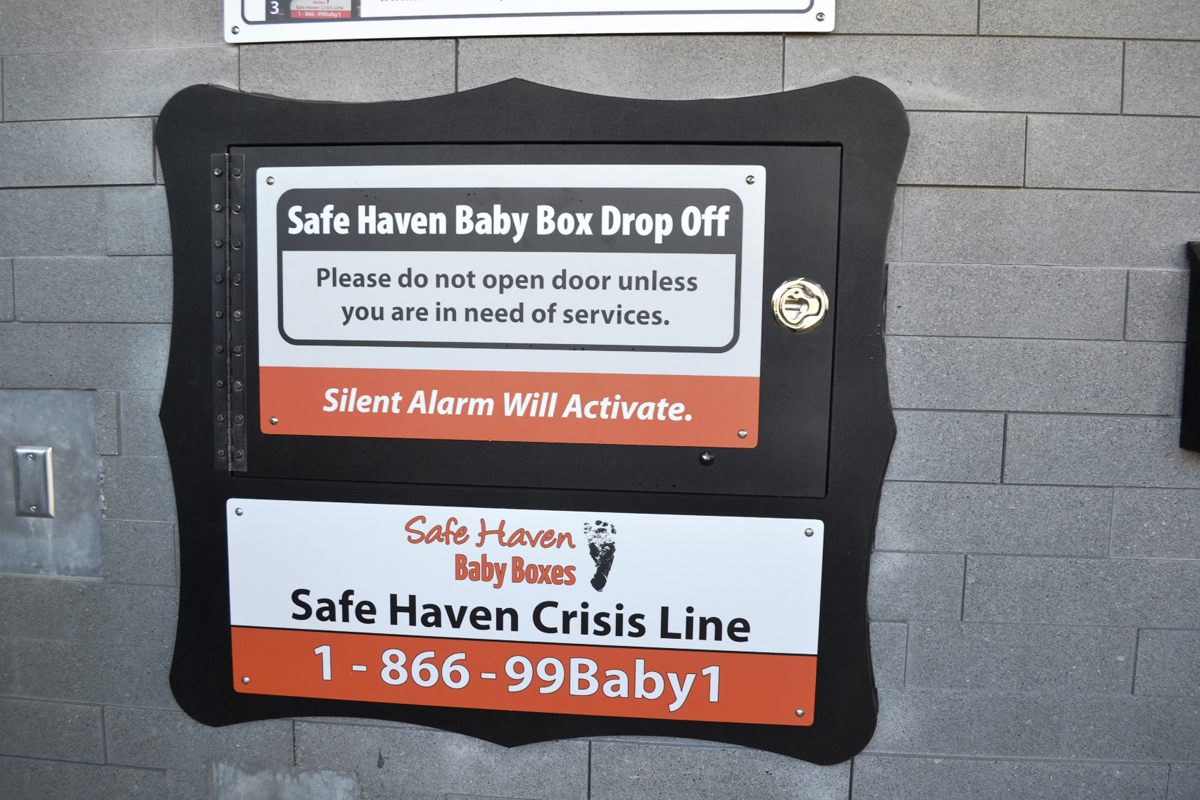 The baby box at Franciscan Health Michigan City is discreetly located outside the Emergency Department at the hospital, 3500 Franciscan Way, on the northwest corner of Interstate 94 and U.S. 421. The box is in a heated and air-conditioned room with its own ventilation. When the box is used, a silent alarm will sound in the Emergency Department so that staff can immediately tend to the baby.

“This allows for any mother in this community, 100 percent anonymity. There is no shame. There is no blaming,” said Monica Kelsey, founder and CEO of Safe Haven Baby Boxes Inc. “I couldn’t be more proud to stand up here today and say that this is the first baby box installation in a hospital in the state of Indiana, and I am so excited.”

Kelsey’s creation of her organization was inspired by her own experience. Her biological mother became pregnant after a rape and, after her birth, abandoned her at a hospital. She was adopted and says today, her parents are her biggest supporters. “I can tell you every child is wanted by someone,” she said. 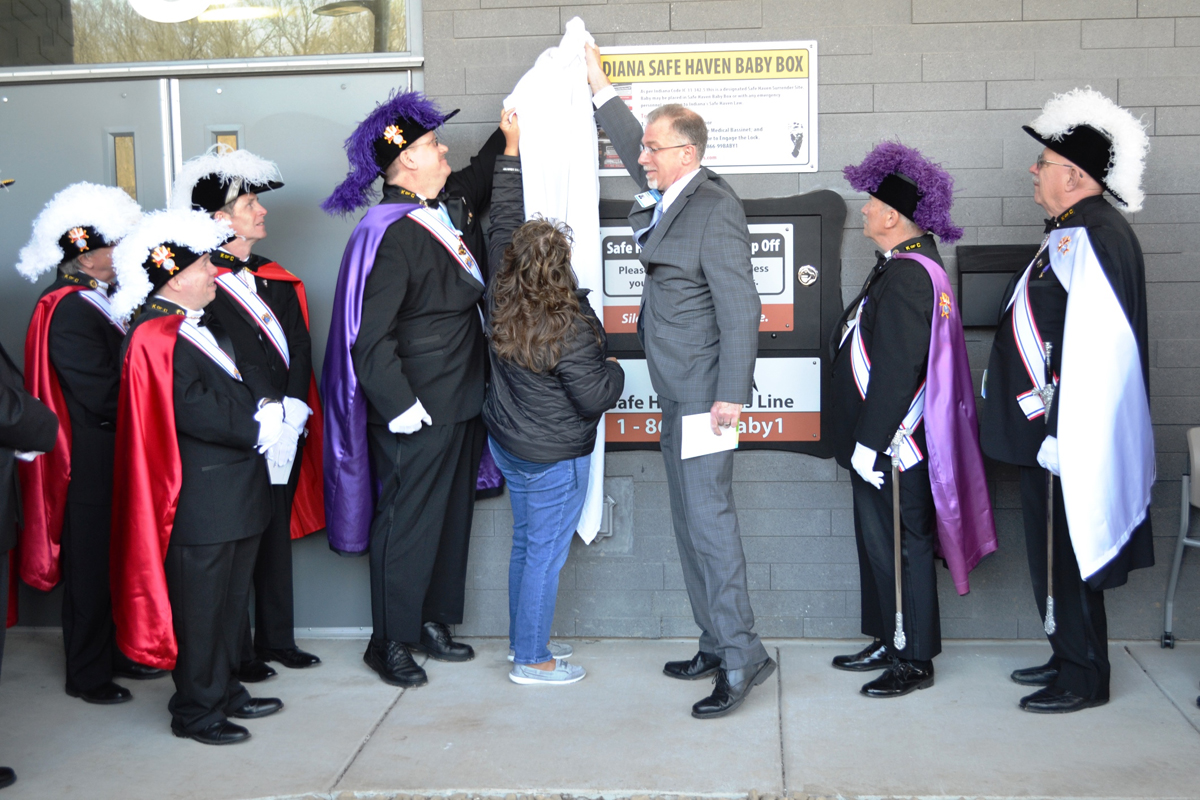 Kelsey has worked to educate others on the Safe Haven Law and introduce use of the baby boxes. So far, she’s brought the boxes to four states – Indiana, Ohio, Pennsylvania and Arkansas – and she has the goal of making the baby boxes legal in all 50 states by the year 2025. She said that her organization is working to spread the word to the public about the baby boxes through a billboard campaign and social media.

In Northwest Indiana, the Safe Haven Baby Boxes have also been installed at the Chesterton Fire Department and the Coolspring Township Volunteer Fire Department, where two babies have been left and rescued, one in 2017 and the other in 2018.

For more information about Safe Haven Baby Box locations or to speak to a licensed counselor, call the National Safe Haven hotline at 866-99BABY1 (866-992-2291)