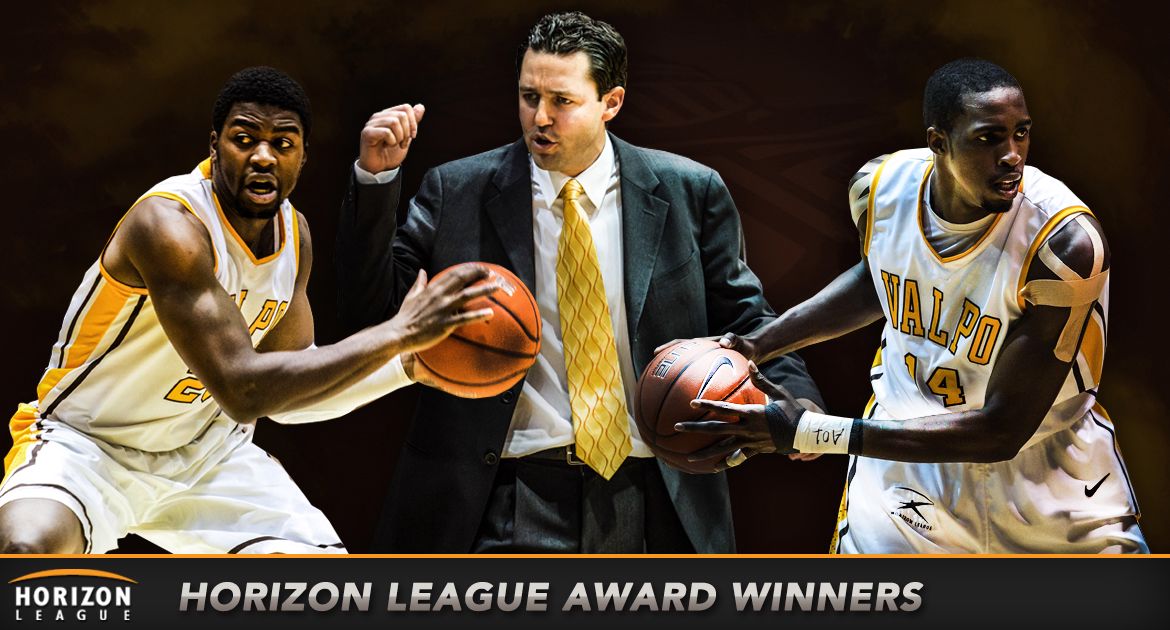 Five members of the Valparaiso men’s basketball program were honored by the Horizon League as the league announced its postseason awards on Monday. Highlighting the award winners were head coach Bryce Drew, selected the league’s Coach of the Year for a second time; senior Vashil Fernandez (Kingston, Jamaica/Princeton Day [Md.] Academy, who was named the league Defensive Player of the Year; and sophomore Jubril Adekoya (Tinley Park, Ill./Andrew), who earned Sixth Man of the Year honors.

Sophomore Alec Peters (Washington, Ill./Washington) was named a First Team All-League honoree. In addition, freshman Tevonn Walker (Montreal, Quebec/Vanier College) earned a spot on the All-Freshman Team and Fernandez was one of five players on the All-Defensive Team.

Drew earned Coach of the Year accolades for the second time in his four years at the helm of the Crusader basketball program. Picked fourth in the preseason and despite playing most of the league campaign without its starting point guard, Drew led Valpo to a finish atop the Horizon League standings – the program’s third league regular season crown in his four seasons. This season, Drew has guided the Crusaders to 26 victories overall, matching the program record for wins in a season.

Fernandez takes home Defensive Player of the Year honors, becoming the first Crusader so honored since Valpo joined the Horizon League, and is the second Valpo player in the last three years to earn All-Defensive Team honors. The senior led the league and shattered the program’s single-season blocked shots record, entering the league tournament with 90 rejections on the year. Fernandez, who ranks 11th nationally with 2.9 blocks/game, helped anchor a Crusader defense which is among the top-15 in the nation in field goal percentage defense and top-30 in scoring defense.

Adekoya is the third Crusader to pick up the Sixth Man of the Year award since Valpo joined the league. The sophomore came off the bench in 25 of his 29 appearances this season, including all 16 Horizon League games. Within league play, Adekoya averaged nearly 20 minutes per game and recorded 5.4 points and 4.4 rebounds per contest while shooting at a 59.3% clip from the field. He scored in double figures twice in Horizon League action, including a career-high 14 points in a win at Youngstown State.

Peters earned a spot on the First Team All-League squad, the fifth straight year the Crusaders have been represented on the First Team. The sophomore is the first Valpo underclassman to receive First Team accolades since Raitis Grafs in the Mid-Con in 2000-01. Peters finished the regular season second in the league in 3-point percentage (.472), third in 3-pointers made (2.4/game), fifth in scoring (16.8 ppg) and free throw percentage (.827), and sixth in rebounding (6.8 rpg) and field goal percentage (.499). He also led the league in Offensive Rating (125.8) and ranks eighth nationally in the category among players who use at least 20% of their team’s possessions.

Walker is the third Crusader freshman in the last two years to earn a spot on the league’s All-Freshman Team, as both Peters and Lexus Williams (Chicago, Ill./Marist) were on the squad this year. Walker started all but one of the Crusaders’ 31 games this year, averaging 10.7 points and 3.5 rebounds per game. He led the Crusaders in steals with 37, and ranked among the league’s top-15 in league-only play in three different categories. Walker scored in double figures 18 times on the season as well.