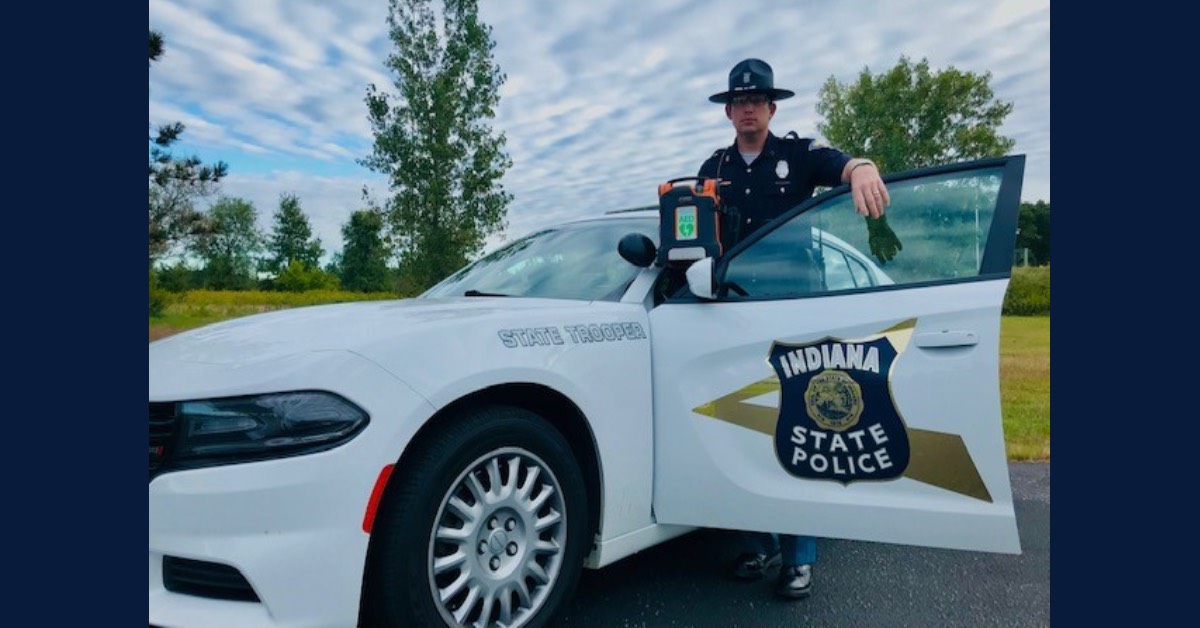 Senior Indiana State Trooper Art “Artie” Smith was on patrol the day after Christmas 2021 just south of Elkhart when he was dispatched to a minor fender bender involving a driver who rear-ended a trooper while stopped at a stoplight.

“I showed up to work the crash and there were no injuries, just minor damage,” Smith said.

The 10-year Indiana State Police veteran, who is assigned to the Bremen District, has responded to hundreds of car accidents throughout his career and this one seemed routine, at first.

“The other trooper left and I was standing on the shoulder with the other driver going over the paperwork between the vehicles and started to walk away when out of the corner of my eye, I saw him stumbling,” Smith said.

Smith walked over to check on the 63-year-old man and saw he had his hand on his chest. The man was unresponsive.

“It definitely looked like a heart attack,” Smith said.

Smith’s squad car, like those of every Indiana State Police trooper throughout the state, is equipped with an automatic external defibrillator (AED) donated by Bolt for the Heart. An AED is used to restart someone’s heart in the event of sudden cardiac arrest.

“I called dispatch for an ambulance, got my AED and shocked him once, did three or four compressions and he came to,” Smith said.

Smith said when the paramedics arrived, they confirmed the man had what is commonly referred to as “a widow-maker heart attack.”

“I was in the right place at the right time with the right equipment and the right training with only seconds to spare,” Smith said.

Bolt for the Heart is an Indiana-based 501(c)(3) nonprofit organization that raises funds through sponsorships, donations and 5Ks/half marathons to buy AEDs for first responders. Bolt for the Heart has donated more than 2,000 AEDs, including 465 AEDs for the Indiana State Police, to date.

The idea began when an Indiana State Police trooper experienced a cardiac event. Pierre Twer, founder of Bolt for the Heart, asked if the trooper had an AED in his squad and learned he did not.

Twer is a native of Michigan City. He started the fundraising Bolt for the Heart races in Carmel, but wanted to bring them to LaPorte County to be able to give back to his home county.

“I remember when Pierre contacted me and we learned we’re from the same county,” said Indiana State Police Superintendent Doug Carter, who now serves on the Bolt for the Heart board of directors. “He said he wanted to put AEDs in the cars of all the frontline troopers. I said, ‘This guy has no idea how much they cost.’ Now we’re almost 500 AEDs later.”

Bolt for the Heart is gearing up for its next local race. The fourth annual Bolt for the Heart Hallowrun, sponsored by Franciscan Health Michigan City, will take place at 9 a.m. on Oct. 29, 2022 at Washington Park in Michigan City. All proceeds from the event will go toward the purchase of AEDs for local law enforcement vehicles.

Twer said the Michigan City Police Department hasn’t had any saves with their AEDs, yet.

“We know that will happen, it’s just inevitable,” Twer said. “That’s why we do what we do. When the time comes, these officers will be equipped with the tools and training they need to respond in a time of crisis.”

“The annual Bolt for the Heart event has been a tremendous success each year for the past three years,” Mazzoni said. “Success means AEDs in the hands of our first responders, our dedicated law enforcement officers. Success means lives saved. We at Franciscan Health Michigan City are honored to once again be the presenting sponsor for this very important event to our community.”

If the first person on the scene knew CPR and applied an AED within five minutes, the American Heart Association estimates at least 40,000 more lives per year could be saved.

The Play for Jake Foundation has been part of the Bolt for the Heart program since its inception with the help of founder Julie West. West is driven in her efforts to save other families from the loss her family experienced when her son, Jake, died on the LaPorte High School practice field as the result of an undetected heart condition in 2013.

Registration for the Oct. 29 Bolt for the Heart Hallowrun 5K run/walk is $30 and for the 10K, $40. Prices increase by $5 after Oct. 9. A Play for Jake package is also available, which includes a ¼ zip shirt, T-shirt and a coupon for a heart scan at Franciscan Heath Michigan City.

Franciscan Health offers 10-minute, non-invasive $49 heart scans with a free heart risk assessment included with every screening, to help patients and their doctors determine risk for heart disease. Heart scans are recommended for men and women aged 40 and older with one or more of the following risk factors: current or former smoker, diabetes, family history of heart disease (parent or sibling), abnormal cholesterol level or high blood pressure.

For more information on the $49 heart scans or to schedule an appointment, call (888) 895-8774 or go online to www.franciscanhealth.org/conditions-and-services/heart-care/heart-scan.

For more information on the Bolt for the Heart Hallowrun, to register for the race or to donate, go to www.boltfortheheart.com.