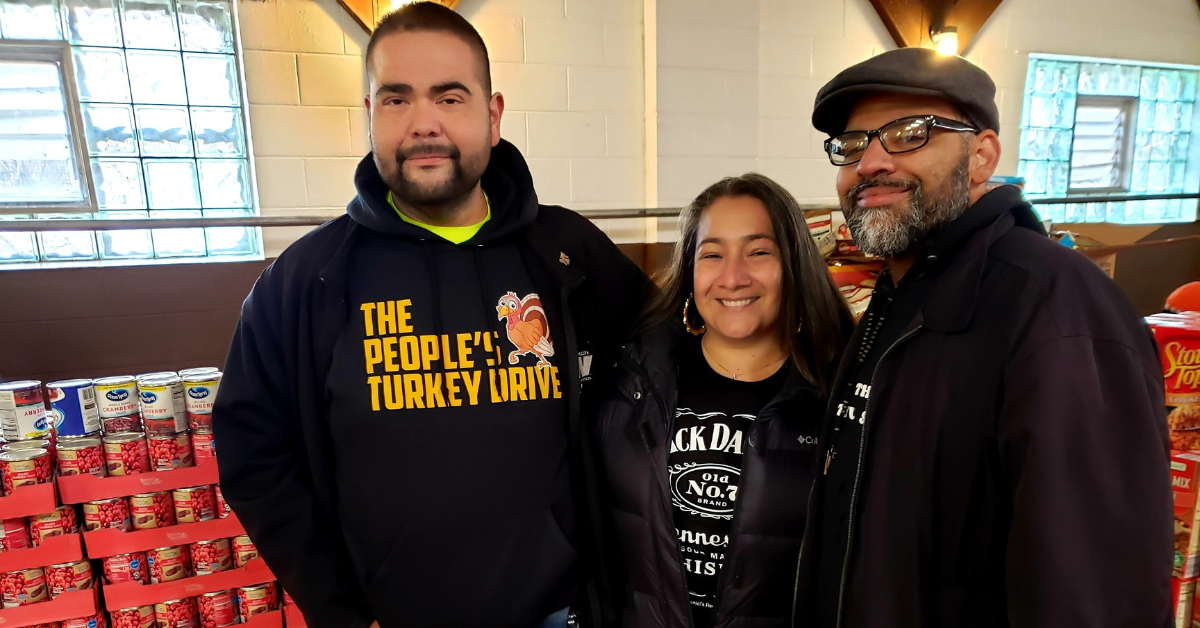 Featured Photo: "Juan Fernandez, right, co-founder of The People’s Turkey Drive, stands with co-founders Jason Reyes and Nina Zamora-Ojeda beside food collected for this year’s efforts. Fernandez was assisted by his Franciscan Health co-workers this year in collecting enough food and monetary donations to feed more than 800 families this Thanksgiving."

Juan Fernandez’s grandmother always loved Thanksgiving and inspired him to help others struggling during the holidays.

“She was a teen when the Great Depression hit and remembered having nothing to eat for Thanksgiving,” Fernandez said. “She passed away just before Thanksgiving, her favorite holiday. It was rough for us as a family.”

The East Chicago resident decided shortly thereafter, he wanted to do something to honor his grandmother’s memory and help others to have a happy Thanksgiving. The People’s Turkey Drive began in 2010 with Fernandez and his friends Jason Reyes and Nina Zamora-Ojeda.

“I told my friends, ‘I know a lot of people are struggling paycheck to paycheck,’” he said. “I texted 100 of the people in my phone asking if anyone wanted to help try to do this and out of nowhere, 40 said they would help. We got a list of 35 families in need and it just took off.”

“We want to make sure families, at least for one day, don’t have to worry about where their meal will come from,” Fernandez said.

Fernandez has worked on the receiving dock at Franciscan Health Munster for the last two years.

For their tenth year, organizers hoped to serve more than 1,000 families, but when the COVID-19 pandemic hit and co-founder Jason Reyes was sidelined by a kidney transplant, The People’s Turkey Drive put its efforts on hold.

The 2022 event marked the return of the turkey drive.

“I read what was in the papers about them and said I’d really like to see us support these efforts,” Young said. “I’m grateful to have Juan in my life.”

As a result of that conversation, Fernandez’s co-workers at Franciscan Health Munster, Dyer and Hammond and the Dr. John Lanman Clinic in Hammond assisted in this year’s drive by donating side dishes as part of the CARE Collection sponsored by the Franciscan Health Dyer, Hammond and Munster Mission Integration Committee.

The Franciscan Health co-workers collectively donated 640 side dishes to the turkey drive efforts. The Medical Executive Committee contributed $5,000 to the efforts and other hospital and clinic staff members donated more than $400.

In total, the People’s Turkey Drive fed more than 800 families this year or 3,360 individuals. Fernandez said he was touched by the compassionate concern and Christian stewardship of his Franciscan Health co-workers.

“I’ve never seen a company and community of employees come together with what they’ve done,” Fernandez said. “It’s very humbling. You see random people helping, the ones you’d least expect to get involved, asking how it was going. To have a supporting cast like this around is amazing. I’m very blessed to have such wonderful, caring co-workers.”