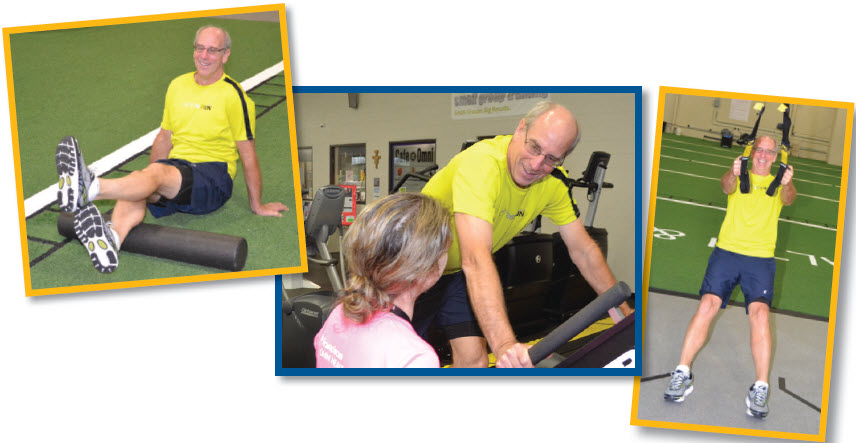 Bob Persic’s winter exercise regimen doesn’t differ much from his warmer-weather routine, but on the whole, “I feel better exercising; I feel better about life. I sleep and eat better – all of that is a positive,” says the 63-year-old Munster resident.

Persic, a retired construction company owner, credits his 1 1/2 year membership at Franciscan Health Fitness Centers in Schererville (also Chesterton location) and “the broad spectrum of classes” as the positive influence that keeps him returning as often as six times weekly.

“It’s a happy place. People tend to think of health clubs as a bunch of guys in the back throwing weights around. But this place is different; I never anticipated meeting and getting to be friendly with people,” Persic said.

“We help one another, support each other, share with each other – it has totally shocked me; I never expected this. My wife and I checked out some of the competition and decided this is the friendlier place to be. It is down-home. Workouts are more fun and relaxing and the time goes by faster.”

His goal is to complete a half-marathon (he credits his daughter with getting him into running) in two hours. He prefers to run outside, but takes it indoors when the outside temperature drops. “Otherwise, I don’t do anything different during winter,” Persic said, adding, “I try to stick to the same routine.”

Leah Okner, wellness manager, said, “I love watching Bob come here. He is known as the ‘governor’ because he knows and talks to everyone.”

She added, “The sense of community here is unmatched. I have worked all over the world and never seen anything like it is here. Everyone here, from the top down, genuinely cares and wants to help educate our clients.”

Persic agreed. “People here do simple things to help you and that tiny bit of friendship goes so far. It’s not just exercise, it’s fun. You feel better about yourself. It’s not a health club, per se, it’s the full-service aspect. People are here to help you.”