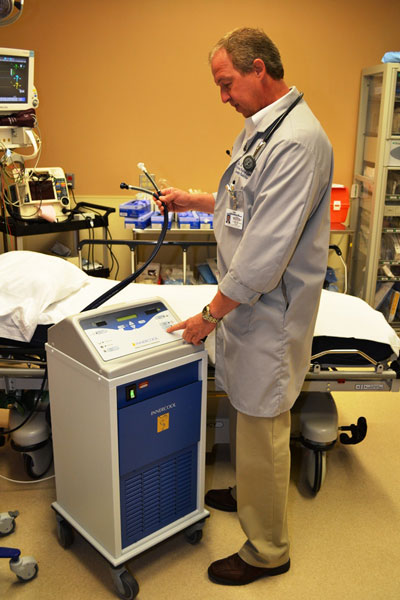 Although the procedure may be new, the idea’s origins can be traced to Hippocrates and to Napoleon’s army during the French revolution of the 1800s.

“They found that officers in the French war who were stricken in the field, brought to the camp and warmed up by the fire, would not have as good of outcomes as infantry members who were left out in the field, in the snow,” said Dr. Daniel Netluch, chief of emergency services, who was instrumental in bringing the program to the Franciscan St. Anthony Health.

“The infantry were cooled down and actually had better recovery rates than the officers who had better care by the fire,” he added.

Fast-forward to modern times, when following years of studies worldwide, the idea saw a breakthrough in 2002, when independent studies in Australia and in Europe, in which cardiac arrest patients were resuscitated, then rapidly cooled to 32 degrees Centigrade, saw what Netluch described as remarkable outcomes.

“Neurological recovery rates went from about 2 percent to 55 to 60 percent, with this procedure. The cooling, provided by jell-wrapped pads used with the cooling machine, decreases the body’s metabolic rate and so protects the brain from neurotoxins that usually attack 24 to 48 hours after cardiac arrest. We cool the patient down for 24 hours, aggressively manage the body’s metabolic changes, and then slowly bring the body back to its normal temperature.”

Netluch said the process to bring the technology to Franciscan St. Anthony Health began in 2010, when he attended the therapeutic hypothermia program at Minneapolis Heart Institute at Abbott Northwestern Hospital.

“The new procedure was brought back and was enthusiastically supported by the Franciscan Alliance executive team. The program officially started April 25. Plans are to provide it to all Franciscan Alliance hospitals. Communities across the country only began using this in the last year of two,” he added.

“This is a great, new concept and technology that is proven to save lives,” Netluch said.

“This technology allows us to cool the body and prevent damage that normally would occur in the brain and to other vital organs. Whether a patient is brought here in cardiac arrest or suffers it in the hospital, we offer yet another tool to help assure the best outcomes.”