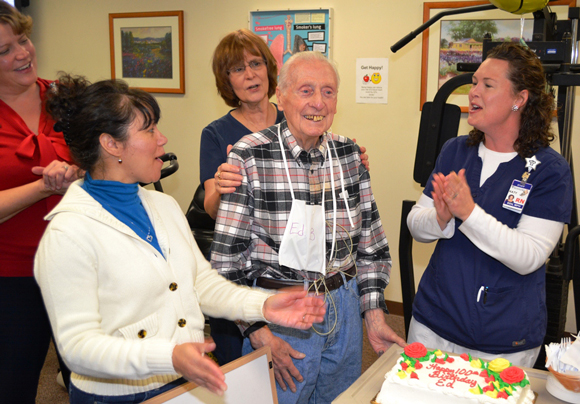 Ed Brunner (center), has met Babe Ruth, who once tipped him a quarter when Brunner was managing director of the renowned Capitol Theatre on Broadway in New York City. He also met Bing Crosby, Marilyn Monroe and Frank Sinatra, among others, during that portion of his 100 years of life, which were celebrated by Cardiac Services staff members at Franciscan St. Anthony Health-Michigan City Dec. 5.

Brunner, since September, has been a pulmonary rehabilitation outpatient, who nurses say delights them with each visit. “He has been dedicated to his pulmonary rehab classes and has not missed a session since he started,” said Katy Quigley-Gartland, R.N. (right), adding, “Ed always has a smile on his face and a very positive outlook on life. He manages to keep busy every day.” 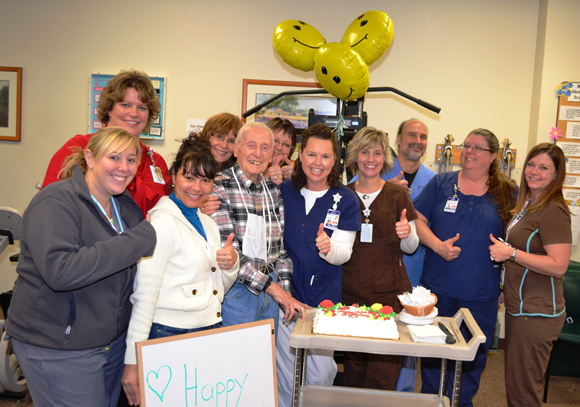 Brunner, who turned 100 on Dec. 7, is a native New Yorker who has resided in Michigan City 11 years and has four children, who stay in close touch. He still lives independently, is “very sharp” mentally, according to the nurses, and has all of his faculties; uses e-mail to correspond, and drives.

Asked the secret to his longevity, Brunner, who was married to his late wife for 63 years, quipped, “I drink a cocktail at 5 o’clock every day. I feel lucky to have lived a good, long life.”