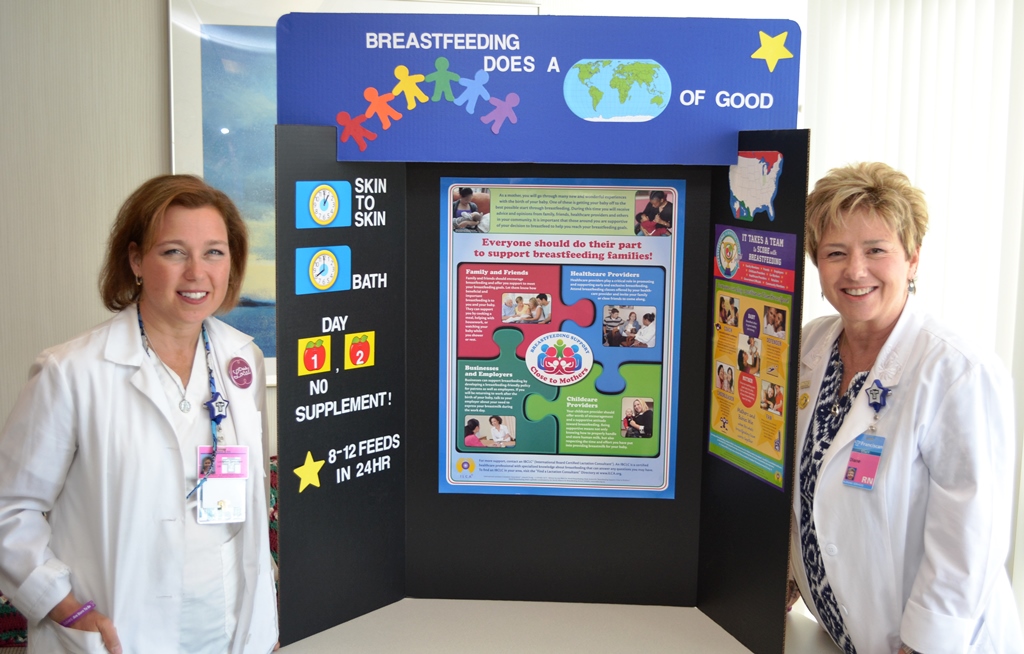 Large posters located on the unit and in the main hospital lobby pointed patients and staff members to myriad immediate and long-term health advantages breastfeeding offers babies and mothers alike.

“We’ve taken pieces from the Baby Friendly concept and instituted them in our practice,” she said, adding the hospital also follows American Academy of Pediatrics evidence-based best practices.

Among those practices, according to Diane Benner and Diane Gora, members of the unit‘s lactation consultation team, are:

Skin-to-Skin: Placing an undressed newborn on the mother’s chest or abdomen from 30 minutes to two hours to encourage and facilitate breast-feeding and bonding. It also helps to regulate body temperature, blood sugar, heart rate and respiration. “It makes the transition to life outside the womb much easier,” Gora said, adding, “There are far fewer complications.” It also is encouraged for mothers who do not plan to breastfeed. Research likewise has shown babies who experience skin-to-skin cry less and stay warmer.

Delaying the first bath for eight hours after birth, which also facilitates bonding; and delaying food supplementation for the first two days.

Exclusive breastfeeding for the first six months, for one year is preferred; because the milk contains disease-fighting substances that protect the baby and likewise are good for the mother’s health. Beyond the breastfeeding stage, the milk can help reduce the child’s risk of cancers, diabetes, allergies, high cholesterol, bowel disease, high blood pressure, obesity, sudden infant death syndrome and boost intelligence.

For mothers, benefits are said to include reducing stress and postpartum depression, enhancing relaxation and protecting against breast and ovarian cancer.

“Mothers also use more calories when they breastfeed, which helps them get back into their skinny jeans sooner,” Benner said, adding, “Those who breastfeed for a year also reduce their chance of rheumatoid arthritis and breaking bones during menopause, since it nearly doubles their bone density.”

Added Gora, “The idea is to make breastfeeding the norm because of all the health benefits it offers. It’s mother’s magic milk.”

The Birth Place has a team of lactation specialists, who provide inpatient and outpatient support. For more information, call (219) 757-6330.