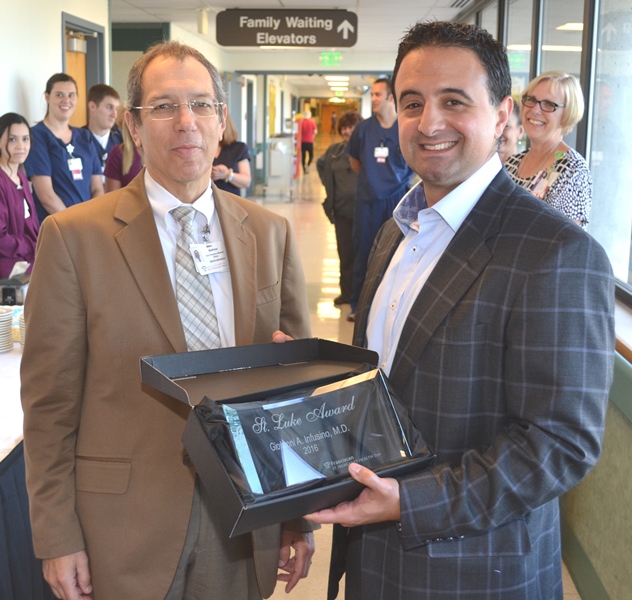 Two Franciscan St. Margaret Health physicians recently received St. Luke awards, which annually are presented on behalf of nurses from the Dyer and Hammond campuses to honor excellence in service to patients and staff.

Eric Cook, DO, an Emergency Department physician at the Hammond campus, who has spent his 10-year career there; and Giovanni Infusino, MD, an internal medicine specialist at the Dyer campus, who has been there since he began in practice nearly a year ago; were presented with plaques, cakes and other keepsakes, during programs at their respective hospitals.

Also known as the doctor of the year honor, the St. Luke Award has been presented at Franciscan St. Margaret Health since 2008, “in recognition of extraordinary efforts in maintaining excellent rapport with nurses, providing educational mentoring and leadership and exhibiting a collaborative approach to patient care, which shows respect for the nursing profession and to the mission of the Sisters of St. Francis.”

Luke is the patron saint of physicians.

The awards were presented by Matthew Teolis, DO, interim president and chief executive officer for both campuses, who also is vice president of medical affairs; during ceremonies packed with applauding nursing staff members and hospital officials. 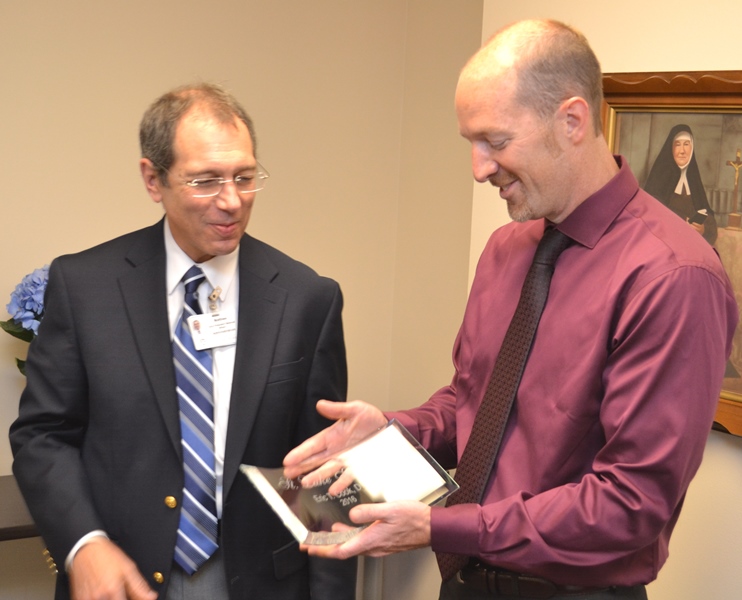 Dr. Teolis lauded the doctors’ contributions to the hospitals and their patients, adding that there could be no higher honor for them than to be recognized by the nursing staffs.

“It’s long been the idea that the doctor is captain of the ship,” he said, adding, “but for those of us who take care of patients, we know it is a team effort that wouldn’t be possible without the support of the nurses. Without them, nothing would get done. This is one of the highest honors a doctor could receive.”

Both physicians expressed surprise and gratitude and said they were humbled by their selection.

Said Dr. Cook, “In the ED, people look toward physicians to know what’s going on, but it’s the nurses who influence how things function in a hospital. Nurses are worth their weight in gold. Without good nursing, there would be no patient care.”

Added Dr. Infusino, “I am very honored and humbled to receive the award. Everyone has made it easy and fun for me to work here. Nurses are responsible for 90-plus percent of the care we provide and it is a pleasure to work with all of them.”