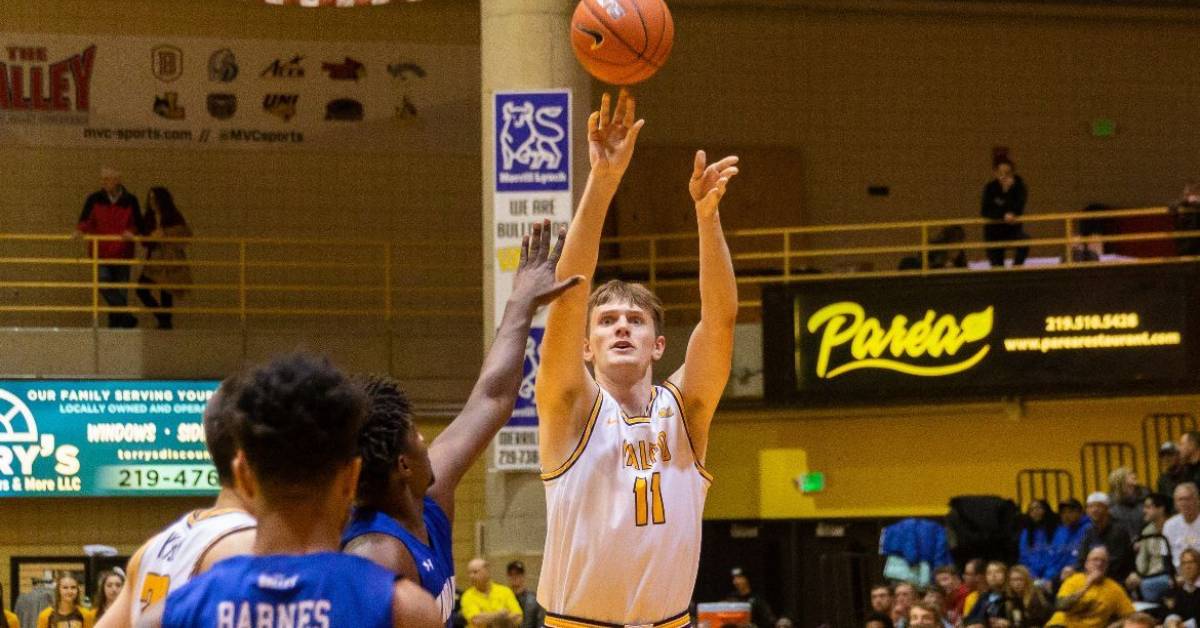 Many college basketball players picked up a basketball as soon as they were old enough to walk, but Valparaiso University sophomore Emil Freese-Vilien appeared in his first game at the Division-I level less than five years after competing in the sport for the first time.

The Copenhagen, Denmark native had his first basketball practice shortly after turning 14. That began a rapid development that eventually led to his opportunity to play at Valpo and in the prestigious Missouri Valley Conference.

“At that time, I was still playing badminton four times per week,” Freese-Vilien said. “It wasn’t until almost a year later that I started playing basketball on a serious level. I got asked to a training camp by the U15 national team, and from that point on, I started playing basketball exclusively. Everything in my basketball career has moved so fast. I’ve been fortunate that coaches have seen potential in me and I’ve been able to participate in a high level of competition.”

Representing a school or University while playing a sport is a new concept for Freese-Vilien, who said academics and athletics are separate in Denmark. That is one of the many differences that Freese-Vilien adapted to when he made his way to the United States for his freshman year at Valpo.

“When I first got here, I remember being very confused for the first two or three months,” he said. “I was looking around trying to find things that were familiar, but every day there was something new that I wasn’t used to. Even the basketball aspect, which would normally be what I found familiar, was a bit different. There is a bit of a different playing style in the U.S. compared to Europe. There was a lot to get used to my first year.”

A familiarity with the culture and the program isn’t the only difference for Freese-Vilien this year. He has bulked up from 230 pounds a year ago to 255 as a sophomore.

“For many years, I’ve tried to gain weight, but had trouble eating enough,” he said. “This summer, I was told to stay mainly in the weight room instead of worrying about getting in the gym to get shots up. I lifted at least four or five times per week, sometimes more, for the entire summer.”

During his freshman campaign, the 6-foot-10 center appeared in 16 games and averaged 6.6 minutes per contest while totaling 16 points, four blocked shots, five assists and 15 rebounds (six offensive). In the classroom, Freese-Vilien is majoring in civil engineering.

“I’ve enjoyed it a lot; I feel like those of us in the engineering department are part of a small community on campus,” he said. “It’s more about learning from each other and gaining experience than trying to beat out your classmates with a better test score.”

When he’s not studying, on the court or in the weight room, Freese-Vilien can often be found drawing blueprints and houses. He wanted to become an architect for a long time and still has that desire in the back of his mind.

Freese-Vilien was delayed in rejoining his teammates in Indiana due to challenges traveling back from Europe, but he returned to campus on Aug. 14 in time for the start of classes. Since then, he’s developed an excitement about the team’s outlook this season.

“We have a lot of good players who have come in, and we have a very deep team,” Freese-Vilien said. “We’re not a team where there’s only one or two players who can get it done; it’s going to be a team effort for all of us. I believe we’re going to have a good team, good chemistry and a good year.”