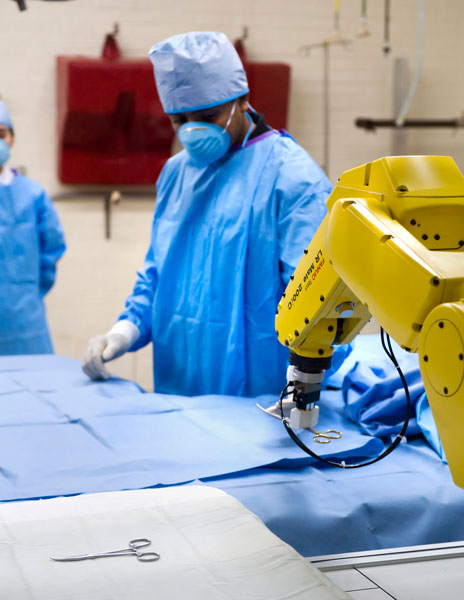 Surgeons of the future might use a system that recognizes hand gestures as commands to control a robotic scrub nurse or tell a computer to display medical images of the patient during an operation.

Both the hand-gesture recognition and robotic nurse innovations might help to reduce the length of surgeries and the potential for infection, said Juan Pablo Wachs, an assistant professor of industrial engineering at Purdue University.

The "vision-based hand gesture recognition" technology could have other applications, including the coordination of emergency response activities during disasters.

Surgeons routinely need to review medical images and records during surgery, but stepping away from the operating table and touching a keyboard and mouse can delay the surgery and increase the risk of spreading infection-causing bacteria.

The new approach is a system that uses a camera and specialized algorithms to recognize hand gestures as commands to instruct a computer or robot.

At the same time, a robotic scrub nurse represents a potential new tool that might improve operating-room efficiency, Wachs said.

Findings from the research will be detailed in a paper appearing in the February issue of Communications of the ACM, the flagship publication of the Association for Computing Machinery. The paper, featured on the journal's cover, was written by researchers at Purdue, the Naval Postgraduate School in Monterey, Calif., and Ben-Gurion University of the Negev, Israel.

Research into hand-gesture recognition began several years ago in work led by the Washington Hospital Center and Ben-Gurion University, where Wachs was a research fellow and doctoral student, respectively.

He is now working to extend the system's capabilities in research with Purdue's School of Veterinary Medicine and the Department of Speech, Language, and Hearing Sciences.

"One challenge will be to develop the proper shapes of hand poses and the proper hand trajectory movements to reflect and express certain medical functions," Wachs said. "You want to use intuitive and natural gestures for the surgeon, to express medical image navigation activities, but you also need to consider cultural and physical differences between surgeons. They may have different preferences regarding what gestures they may want to use."

"Say the surgeon starts talking to another person in the operating room and makes conversational gestures," Wachs said. "You don't want the robot handing the surgeon a hemostat."

A scrub nurse assists the surgeon and hands the proper surgical instruments to the doctor when needed.

"While it will be very difficult using a robot to achieve the same level of performance as an experienced nurse who has been working with the same surgeon for years, often scrub nurses have had very limited experience with a particular surgeon, maximizing the chances for misunderstandings, delays and sometimes mistakes in the operating room," Wachs said. "In that case, a robotic scrub nurse could be better."

The Purdue researcher has developed a prototype robotic scrub nurse, in work with faculty in the university's School of Veterinary Medicine.

Researchers at other institutions developing robotic scrub nurses have focused on voice recognition. However, little work has been done in the area of gesture recognition, Wachs said.

"Another big difference between our focus and the others is that we are also working on prediction, to anticipate what images the surgeon will need to see next and what instruments will be needed," he said.

Wachs is developing advanced algorithms that isolate the hands and apply "anthropometry," or predicting the position of the hands based on knowledge of where the surgeon's head is. The tracking is achieved through a camera mounted over the screen used for visualization of images.

"Another contribution is that by tracking a surgical instrument inside the patient's body, we can predict the most likely area that the surgeon may want to inspect using the electronic image medical record, and therefore saving browsing time between the images," Wachs said. "This is done using a different sensor mounted over the surgical lights."

The hand-gesture recognition system uses a new type of camera developed by Microsoft, called Kinect, which senses three-dimensional space. The camera is found in new consumer electronics games that can track a person's hands without the use of a wand.

"You just step into the operating room, and automatically your body is mapped in 3-D," he said.

Accuracy and gesture-recognition speed depend on advanced software algorithms.

"Even if you have the best camera, you have to know how to program the camera, how to use the images," Wachs said. "Otherwise, the system will work very slowly."

The research paper defines a set of requirements, including recommendations that the system should:

The work is funded by the U.S. Agency for Healthcare Research and Quality. The article is accessible online at http://cacm.acm.org/magazines/2011/2/104397-vision-based-hand-gesture-applications/fulltext