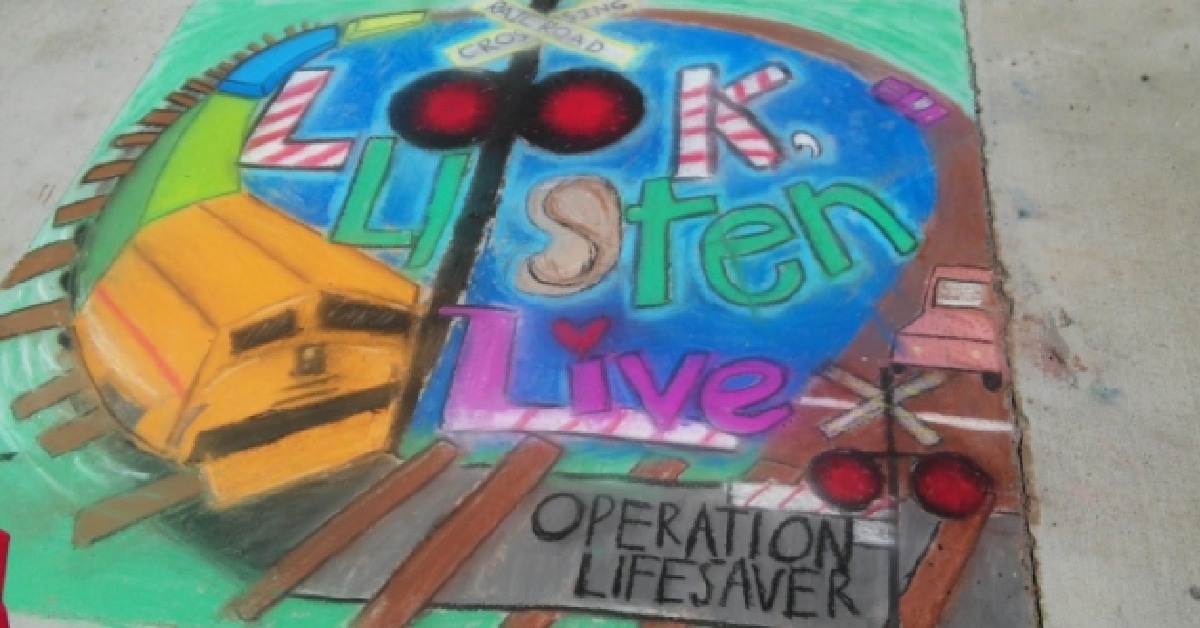 As the weather gets nicer and community members are pining for fresh air and walks outside during social isolation, the Region’s railroad operators want to offer a healthy reminder to pedestrians: Stay off the tracks!

Walking on or along railroad tracks offers that nostalgic sort of days-gone-by feeling, and while some people may find comfort in it, the fact is that all railroad tracks in Indiana are private property and trespassing on them is both illegal and dangerous. The good news is there are plenty of ways to enjoy the outdoors without being near tracks.

Special Agent Jeffrey Price with CN Railroad said he’s alarmed by the number of calls received lately about people walking, playing, and taking photos on railroad tracks. The agent has seen first-hand what vehicle and pedestrian accidents look like involving trains, so he wants to help educate the community about railroad track safety.

“The thing about a train is, it’s not as noisy as you would think on approach,” Price said. “Many times, it’s not possible to hear a train approaching until it is too close to make a full stop. A train traveling 55 miles an hour takes up to a mile to make a complete stop, and that is way too late for someone standing or driving on tracks.”

Price said he has even seen photographers setting up full studio lighting and sets on railroad tracks, which, aside from being illegal, is even more dangerous.

“It has become really popular to have senior pictures taken on tracks, and it’s just not a good idea,” Price said. “Those of us who love trains get the appeal—there are some really beautiful places and the settings can be nice—but it is extremely dangerous, and we will cite people for these infractions.”

Trying to scramble to get off the tracks if a train is coming can cause people to fall, get stuck on the tracks, or simply not make it off in time.

Dan Petreikis, a GreatNews.Life photographer, recommends people look for alternative locations that offer the same composition that railroad tracks do.

“Railroad tracks serve a very convenient source for ‘leading lines,’ which are one of the cornerstones in photographic composition. But taking photos on tracks is illegal, whether the tracks are active or inactive. It's also trespassing, as the railroad companies actually own the land that tracks are on,” Petreikis said.

“Since the basic idea, though, is just to achieve the photographic effect of a composition involving a set of leading lines toward a predetermined focus point (your subject), there are alternatives. I would suggest using perhaps a narrow bike or walking path, or maybe a shady, tree-lined lane where the branches of the trees act as a sort of canopy overhead,” he said. “Maybe a path with guardrails on one or both sides would also do well. You could also simply use a pathway with a solid painted line down the middle—get low to the ground, close to the painted line, and let that serve as the leading line for your photo. These are just a few ideas, and I'm sure with a little thought and creativity, photographers could easily come up with several more. The best thing is just to get out and explore, see what your city or town has to offer!”

The South Shore Line (SSL), a service of the Northern Indiana Commuter Transportation Districts, has a whole page on their website dedicated to railroad safety.

“Trespassing on railroad property is the leading cause of all rail-related deaths in the United States. It is critical that we continue to educate the public on the risks associated with trespassing near railroad tracks or disregarding laws that have been put in place for the safety of those on the train as well as those in our community,” said Kristen Coslet, Director of Safety and Rules at the SSL. “Passenger rail service is a positive and safe means of transportation in our communities and for our riders. We will continue to do whatever it takes to better educate and enforce railway safety measures to avert and hopefully eliminate accidents along the railroad.”

Aside from the obvious “look both ways” when crossing tracks, the SSL also cautions people to cross tracks only at designated crossings, refrain from walking along or on tracks, and to never lean up against a railroad car. If you drop something on the tracks, don’t retrieve it. Notify an SSL employee to assist. It’s also important to use caution when wearing headsets or earbuds near railroad tracks. Stop, look, and listen when around them.

Price said there are misconceptions about train traffic that might give people a false impression that it’s safe to walk or play on tracks.

For example, trains can travel in either direction on a set of tracks, at any given time. The general public should not rely on anecdotal knowledge about a train track’s schedule. Just because you might see a train going a certain direction on the tracks each day doesn’t mean there won’t be additional traffic at times you aren’t typically expecting.

“In addition, sometimes there is a train coming one way and just as it clears, another one is on a second track coming the other way. If you’re only looking on way, or you’re used to seeing a train going one particular way on the tracks and you get careless, it could end in tragedy,” Price said.

Both CN Railroad and the SSL refer to Operation Lifesaver as a hub of valuable information regarding railroad safety. Since 1972, this not-for-profit organization has offered community education and resources to reduce collisions, injuries, and fatalities around railroads.

Teachers, educators, and parents can access a number of public safety campaigns and educational materials to share with students and children who go outside to play. Adults should adhere to these practices as well and lead by example.

Below are more tips for staying safe around railroad tracks. Price encourages adults, children, and families to enjoy the outdoors in all the right places – such as parks, bikeways, walkways, and public roads safe for pedestrian traffic.

The only safe and legal place to cross train tracks is at a railroad crossing. Railroad yards, lines, tunnels, and bridges are private property. Walking or biking along rail lines or taking a short cut across tracks is dangerous and illegal under state law; you could also be arrested and face a fine of up to $500. Obey the crossing signs and signals. They are there to keep you safe. Proceed through only when the warning signals have stopped, and you have a clear view that no other trains are coming. Do not allow yourself to be distracted. The CN Police will be on patrol in your community and want to send a strong safety reminder to not trespass onto railroad tracks/property. Be aware of your surroundings—and Look, Listen, Live!

STAY OFF THE TRACKS: Never walk, cycle, or drive along railroad tracks. It is hard to judge how far away a train is or what speed it is travelling. Trains can go as fast as 90 miles per hour (in some areas) and take a mile or more to stop. That is the length of 18 football fields.

KEEP OFF RAILROAD PROPERTY: Railroad yards, tunnels and bridges are all private property. If you are caught trespassing on them, you could be fined and/or taken to jail. It is not just illegal to trespass on railroad property, it is extremely dangerous. Railroad tunnels and bridges are often only slightly wider than the rails, leaving little to no room for you if a train does come along.

USE DESIGNATED RAILROAD CROSSINGS: Always cross railroad tracks at designated crossings. Trying to cross tracks anywhere else could be deadly. Remember, trains can come at any time, from either direction, and on any track. They also do not always run on a set schedule.

OBEY ALL RAILROAD SIGNS AND SIGNALS: Obey all railroad signs and warning devices, such as lights, bells, and gates. Before proceeding through a crossing, look both ways and listen for approaching trains. If a train is coming, or railroad warning signals are activated, stop behind any gates or stop lines, or no closer than 15 feet from the nearest rail, and wait for the train to pass. Cross only after the warning signals have ceased and you are certain no other trains are approaching, from either direction, on any track.

STAY ALERT: You cannot avoid getting struck by a train if you don’t hear it or see it coming. Today’s trains are extremely quiet, so do not be distracted by cell phones, other devices, when behind the wheel, or for any reason, in the vicinity of a railroad crossing. You won’t hear the train or warning if you are distracted. Although trains sound their whistles at most crossings, or in the case of an emergency, some crossings have a no whistle by law in place.

KEEP YOUR DISTANCE: Trains can overhang the tracks by as much as four feet. They can also carry loads that are wider than the railroad cars themselves. So, stay clear. You could also get hit by chains, straps, or other equipment if you are too close.

REMEMBER:  An optical illusion makes it hard to determine a train’s distance from you or its speed. Trains are usually a lot closer than they seem, and travel a lot faster.  A train hitting a car is like a car running over a pop can. The average freight train weighs 12 million pounds. Your average car weighs around 3,000 pounds. A collision with a typical freight train and your typical car has a weight ratio of 4,000 to 1. That is the same ratio as your 3,000-pound-car running over a soda can.

THE BLUE ENS SIGN: If you are at or near a crossing and see an emergency on the tracks, there will be a blue sign called the emergency notification sign posted with the phone number to that railroad. There will also be six numbers followed by a letter to identify that crossing. This is like the unique identifier of that crossing. Any person can call that number to report an emergency.