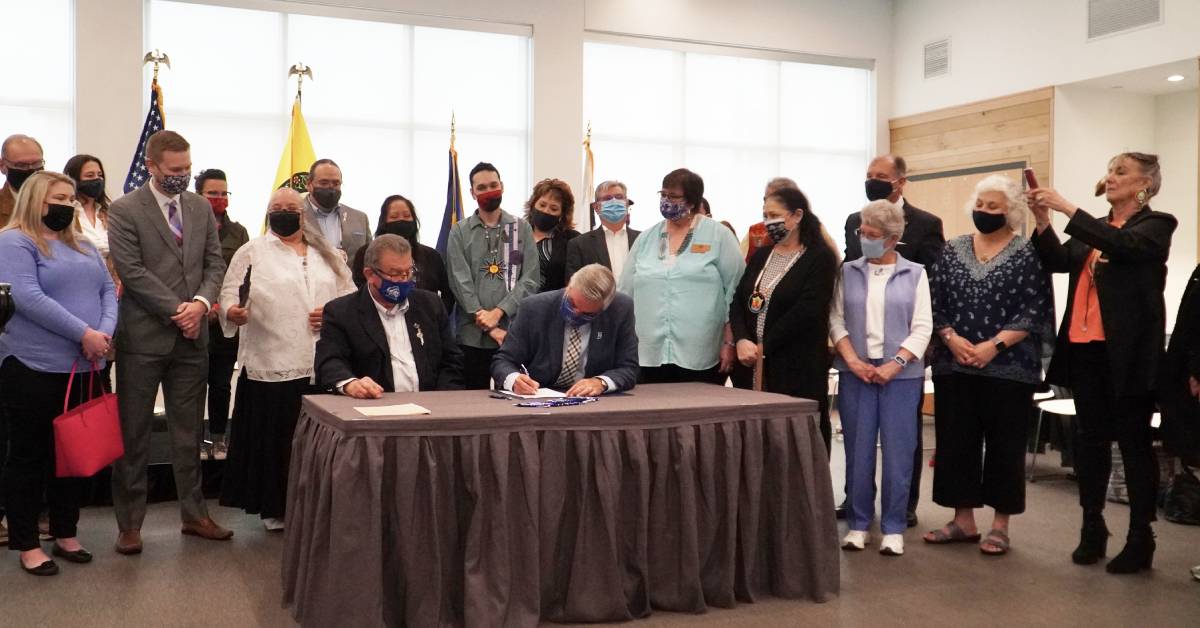 Leaders and community members from the Pokagon Band of Potawatomi Indians of Michigan and Indiana, the State of Indiana, St. Joseph County, the City of South Bend, and the Indiana Gaming Commission gathered to witness a huge milestone on Tuesday afternoon as Governor Eric Holcomb and Tribal Council Chairman Matthew Wesaw signed mutual agreements that frame their successful partnership.

Taking place at Howard Park in South Bend, the event was a ceremonial signing of the bill that ratifies the Class III Gaming Compact between Indiana and the Pokagon Band of Potawatomi Indians. Acting as a ceremonial representation of the ongoing government-to-government relationship - the work between the government of the tribe and the government of Indiana - Tuesday’s signing effectively concluded the State of Indiana’s approval process.

Holcomb was proud to see this important milestone come to fruition and reiterated how this was a true partnership, a project completed hand-in-hand with Wesaw and other leadership in the tribe.

“To arrive at such a major milestone in our partnership, in our home, is great,” Holcomb said. “Why it was so efficient was likely because it was just a natural fit. We were aligned in our goals and we were moving in the same direction in both our vision and our goals.”

Wesaw echoed Holcomb, sharing that the ceremonial signing was more about a quality relationship between two governments than it was about gaming.

“You’re going to hear a little about the compact, which is great, but really what this is about and what the focus has been - and the governor alluded to it a bit - is a building of a government-to-government relationship,” Wesaw said. “Gaming is a byproduct of that, but the Pokagon Band of Potawatomi Indians is much more than the owners of four casino properties. We have done a great deal in our community, building our own government, helping our own people, and improving the quality of their lives. So while all of you hear comments about gaming and compact, today is really about the building and the foundation of a government-to-government relationship.”

This term, government-to-government relationship, was a staple during the ceremonial event, placing great emphasis on how monumental it is to see these two leaders come together for mutual benefit.

Roger Rader, the emcee for the ceremony and Actionable Data Specialist at Pokagon Band of the Potawatomi Department of Information Technology, spoke about his perspective on the signing as a Pokagon Citizen himself and addressed Holcomb with appreciation for helping to make this possible.

“I was part of the first group that got to come meet the governor, and it’s just a testament to what’s been done here,” said Radar. “It’s unprecedented, and it’s unprecedented when it comes to just native sovereignty and state sovereignty. I share with you the sentiment that you are bringing when it comes to the relationship, and it could not have been done without the leadership and governorship there, so I thank you for your leadership throughout this.”

As Wesaw mentioned during his remarks, the Pokagon Band has an impact that extends beyond their casinos.

“Today, we are one of the largest employers in the Region, and this success has enabled us to provide a variety of services to our citizens, including education, healthcare, housing, language and cultural preservation, social services, and law enforcement,” Wesaw said. “We have created thousands of new jobs, supported area businesses and made significant contributions to many area organizations including charities, food banks, schools, municipalities, healthcare providers, and more.”

The Pokagon Band’s impact on the community, whether it be directly in South Bend or extending into greater Northern Indiana and Southwestern Michigan, will only continue further thanks to the signing of this most recent compact.

“What this compact represents to me is certainty, predictability, stability, and continuity going forward for decades to come,” Holcomb said. “All of that hard work of these past few years has led up to this. We’re going to see an enormous amount of good come out of it, and we did it the right way because we did right by each other. For that, I’ll always feel fortunate to have been a small part of knowing all the good that will come from it.”

Wesaw touched on a few of those good next moves that the Pokagon Band already plans to initiate following Tuesday’s signing, including contributions to parks departments and programs for Pokagon Citizens to receive quality, state-funded education at no cost.

“The Pokagon Band is proud to contribute over $2 million over five years to the South Bend venues and parks departments to help revitalize this important attraction for area residents,” Wesaw said. “Another key component of the compact is the Pokagon Indiana Trust Fund, a $1 million donation program. Education is one of our three main pillars; in our community, education is very important to us. This will allow for any Pokagon citizen to attend state-funded institutions of higher education, including two and four-year colleges, plus trade and vocational schools, with all expenses covered.”

Though similar compacts were created and successfully approved in Michigan where there are around 12 recognized tribes in the state, this relationship and the compact that stemmed from it are brand new for the administration here in Indiana.

“The Class III Gaming Compact is a first in Indiana’s history, and also for some Native Americans. It is also the first piece of Pokagon Band legislation passed in Indiana,” Wesaw said. “We also have legislation acknowledging the full faith and credit of our Pokagon Tribal Court, which was passed and signed by the governor.”

Governor Holcomb and Chairman Wesaw not only demonstrated their partnership throughout the ceremony but also emphasized their close friendship and its development throughout the process.

“I’m call him ‘Chairman’ out of respect, but he corrects me every time and says, ‘It’s Matt,’” Holcomb said. “But from the first time we met, I knew that we were going to align. I knew the road ahead, but I knew that we shared the same goals. Your leadership as our partner truly did lead to a friendship, and that is something that I will take with me as I reflect on the new projects that we’ll work on together in that same spirit of cooperation, that same spirit of collaboration.”

Wesaw noted how the compact still needs to be officially approved by the U.S. Department of the Interior in Washington, D.C. However, the Pokagon Band holds hope that the compact will continue on its roll of approvals and receive complete approval in the near future.

Wesaw spoke on behalf of the tribe as he expressed appreciation and thanks to the many individuals and organizations who made it possible to be where they are at this point in the process.

“We appreciate the willingness of Governor Holcomb and Sara Tait, Executive Director of Indiana Gaming Commission, to negotiate the compact in a timely and cooperative manner,” Wesaw said. “I would also like to thank the Indiana General Assembly for their approval, especially Senator Ryan Mishler, who has championed the legislative process for us. In addition, we owe a great deal of thanks to Senator Jon Ford, Representative Dr. Tim Brown, Jake Teshka, Maureen Bauer, and Linda Rogers.”

One of the most prominent contributors to the approval of the compact, the negotiation team for the Pokagon Band, was composed of many individuals who were also deserving of thanks for their dedication and hard work in this process.

“I must also give credit to our negotiation team led by our General Counsel Mike Fallon, General Counsel Ed Williams, Attorneys Rob Gips and Michael-Corey Hinton, Councilmember Steve Winchester, Alex Wesaw, and Gary Morseau, and, as I mentioned, Michael Solari, our Indiana lobbyist,” Wesaw said. “That was the negotiation team, but everything we did had to be approved by this tribal council, so I appreciate the work of everybody in understanding and staying the course on what we felt we needed out of this.”

As the Pokagon Band of Potawatomi Indians of Michigan and Indiana continues to leave its mark on the communities they help serve, be a good neighbor, and actively fight for essential programs and services for tribal citizens, you can stay up to date on their latest work and news on the website here.