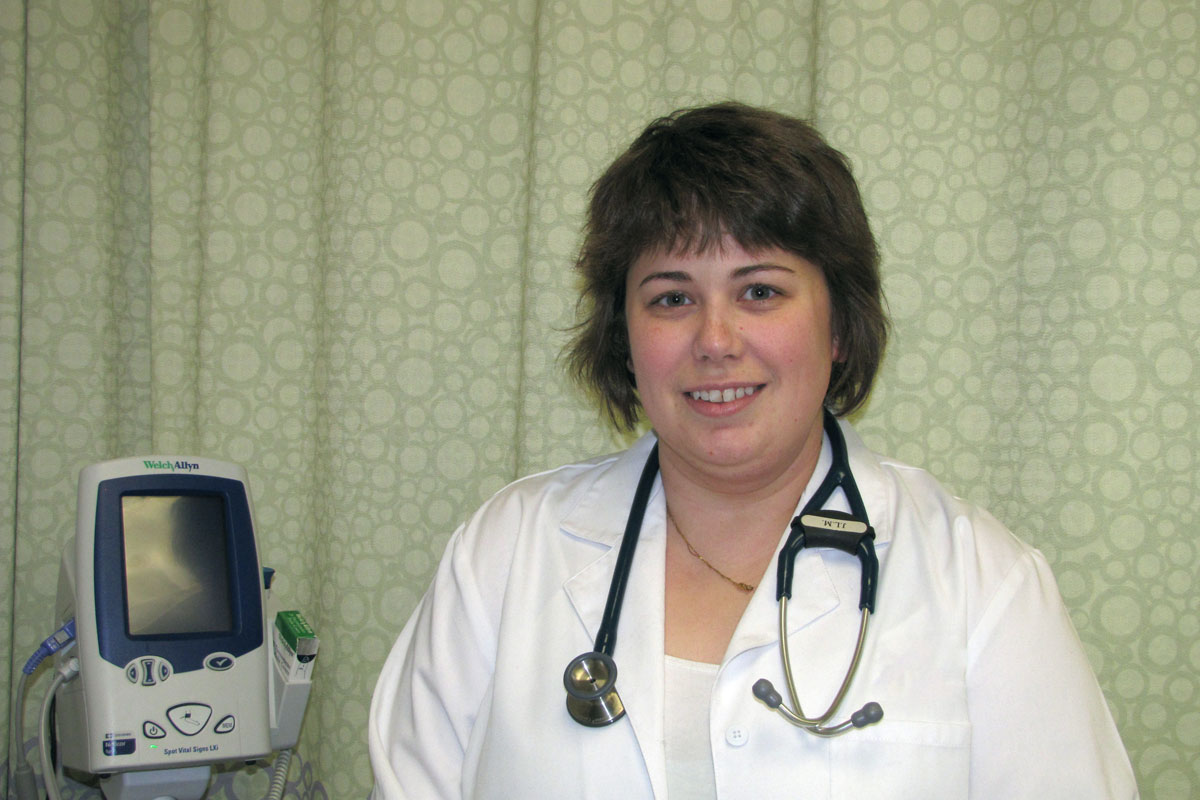 For five years, Michigan City native Jennifer Martz tried to convince herself the art school she was attending would prepare her for her life’s work.

But when a patient died in her arms while she worked part-time at a local hospital, and another stricken patient prompted her to summon a “stroke alert,” the would-be illustrator/fashion designer came to realize it was time to follow a new career path.

So she enrolled in the nursing program at Purdue University Northwest’s Hammond Campus in January, 2011. Now she is on schedule to graduate from Purdue Northwest Dec. 10 with a baccalaureate degree and much more.

Following in mother’s footsteps
The youngest of four siblings, Martz, 29, plans to follow in the footsteps of her mother, a Purdue Northwest Westville Campus alumna, who recently retired from a nursing career. Her father also bleeds Purdue black and gold, having studied engineering at PNW’s Hammond Campus before graduating from Purdue’s West Lafayette campus.

Away from campus, Jennifer—Jen, as her friends know her—serves as a nurse extern in the Oncology Department at The Community Hospital of Munster. A nursing job awaits her once she graduates and passes her Board of Nursing certification exam later this month.

And the Dean’s List student is off and running with her goal.

Researching Parkinson’s disease
For more than a year, she has taken it upon herself to engage in systematic research of Parkinson’s disease, a chronic and progressive movement disorder with which her father was diagnosed two years ago.

“I want to help improve his quality of life, so I decided to research what could be done,” she said. “I learned that depression due to chemical imbalances in the brain of Parkinson’s patients is the main constraint.”

In conducting her research outside of class and laboratory time, Martz has received guidance from nursing faculty members Beth Vottero and Taryn Eastland.

Faculty mentors
“I was worried about asking them to be my mentors, because I knew how busy they are,” she said. “But they really wanted to see me succeed, and that meant a lot to me. In fact, all the nursing faculty here have been amazing; they’ve all touched my life in some way.”

The feeling may be mutual.

“Jennifer is not one to search out ways to make herself stand out,” Associate Professor Vottero said. “Instead, her work is what is so amazing. She is very quiet, yet at the same time eager to learn and take advantage of every learning opportunity.”

Presented her research
Martz presented her Parkinson’s research last month at the Northwest Indiana Nursing Research Consortium, an experience she found exhilarating. “Seasoned nurses who have practiced for 20 or more years asked me legit questions about my research,” she said.

Calling research her “hobby,” science her “love” and taking care of people her “passion,” Martz is looking forward to moving on to the next chapter of her life, which will include graduate study.

“I was really nervous about being an art student who wanted to become a nursing student, but from the beginning, I loved the nursing program and everything I was able to do here,” she said. “Now, I want to be an agent of change who pushes medicine and research forward to improve the quality of life of those who suffer from neurological ailments.”