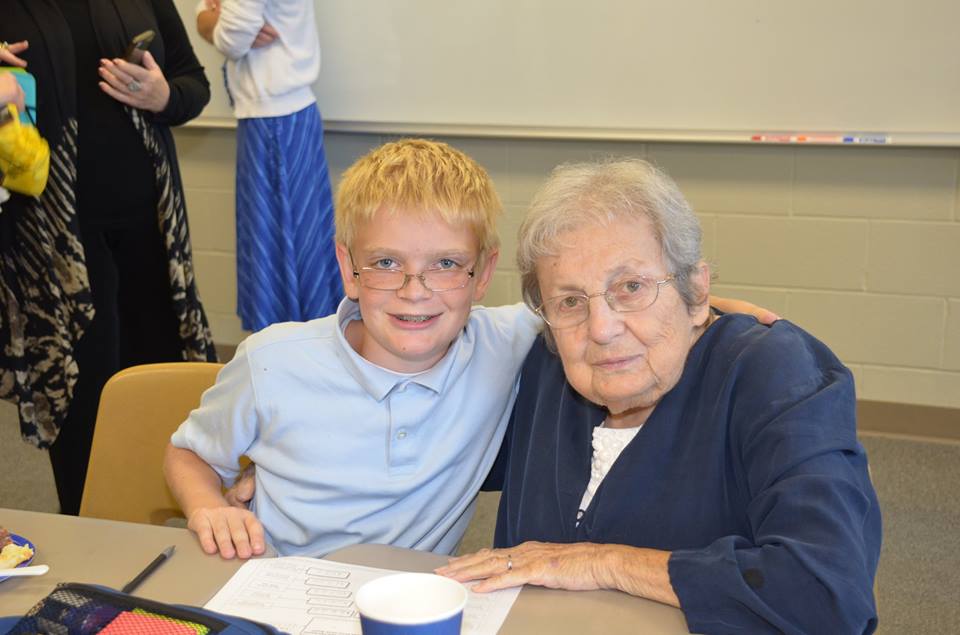 Every September, students in many communities eagerly look forward to welcoming their grandparents to their schools and classrooms for a snack, song, or perhaps a questionnaire. But none can be as versed in the tradition as Dyer resident Diana Samargin, who attended her 22nd annual Grandparents Day at Saint Paul Catholic School in Valparaiso on Friday, September 30th. Beginning in 1995 when her grandson Alec Hartman was in Kindergarten and continuing until this year with Evan Hartman’s 8th grade year, Diana says, “It doesn’t really seem like that many- it feels like just a few years ago. I’m fortunate because my grandchildren always make me feel that it’s very important that I come. They always tell me early so I can make sure I get there.”

For the first 12 or so Grandparents Days, she attended dutifully with Frank, her husband of 55 years, until he passed away in 2007. Alec is the oldest of the 6 Hartman siblings, and is followed by Nicolette, Natalie, Nina, Nadia, and Evan. When there were 4 children at SPCS at one time, despite the difficulty, Mrs. Samargin still made it to every classroom visit within the allotted time. “It’s always an uplifting day,” Mrs. Samargin stated. “This last one was especially good. We’re always talking about these places around the world it would be nice to go to, but we don’t always appreciate what we have right here. It was all about Indiana and home and enjoying where we are. That was good!” [This year’s program incorporated Indiana’s Bicentennial.]

The Saint Paul Catholic School traditional Grandparents Day is held in September, to coincide with the National Grandparents Day (2nd Sunday in September). It begins with Mass in the church, followed by a musical program, then refreshments and time spent in the grandchildren’s classrooms. “There’s always a little format to it, but always something a little different. It’s all very enjoyable and it’s fun to do the little sheets and activities with my grandkids. Just to be near them is a pleasure. My grandkids would occasionally ‘share’ me with other students who did not have a grandparent attend with them. It made it even more enjoyable.” 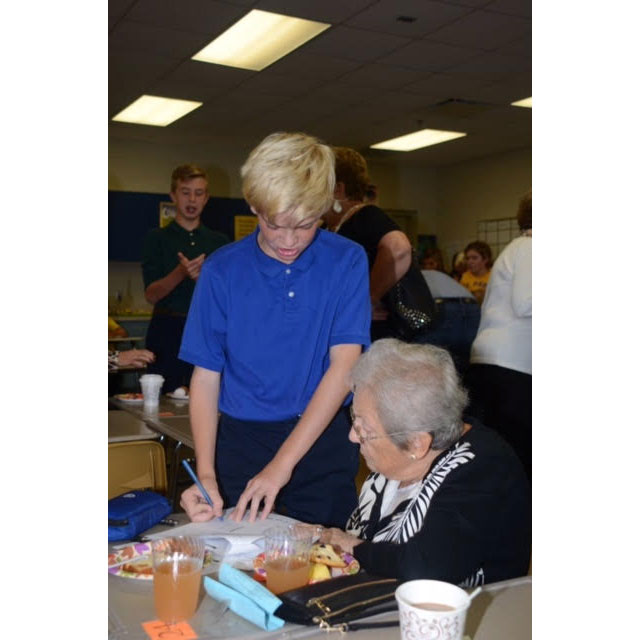 From 1995-2005, Mrs. Samargin attended the Grandparents Days held at the ‘old’ building, located in downtown Valparaiso on Chicago Street. Since 2006, they have all been held in the new Education Center, located at 1755 W. Harrison Boulevard, next to the church. “The atmosphere [at Saint Paul] is very good for children. I like the fact that they are involved, in particular, the Masses. This helps to develop them to be socially relaxed in public speaking. The atmosphere of focusing and respect is just part of the culture, which is great.”

The Hartman children continue to make their grandmother proud. Alec, (SPCS ’04) graduated from Purdue University with a degree in Aeronautical and Aerospace Engineering and is currently a Lieutenant in the US Marine Corps stationed in Quantico, Virginia. Nicolette, (SPCS ’06) graduated from Purdue University with dual degrees in Corporate Communications and Entrepreneurship and is currently Director of IT Placement for Saggezza Software Development, living the life in Chicago and enjoying Cubs Fever. Natalie, (SPCS ’08) graduated from Saint Mary’s College with a degree in Chemistry and is currently in her first year of Doctor of Optometry at The Ohio State University. Nina (SPCS ’11) is a Sophomore at Saint Mary’s College pursuing dual degrees in Global Relations and French and is currently studying in Angers, France until June of 2017. Nadia, (SPCS ’14) is a junior at Andrean High School and is enjoying all that high school has to offer: Art Club, Speech, and the renowned Theater Department. Evan will be graduating from Saint Paul Catholic School in June 2017, having won the St. Hubert and St. Isadore Award Celebrating Excellence in Math and Computer Technology this past May at SPCS. “The fact that the children had a Catholic school education has contributed to making them well rounded people. I give all credit to my daughter Domenica and son-in-law, Gary. Our grandchildren have always been a pleasure to be with.”

At the close of the event on September 30th, Principal Jane Scupham confided in Mrs. Samargin that next year’s Grandparents Day will just not be the same without her, asking her to please still consider attending as an “honorary grandparent”. Says Samargin, “If I know the date, I just might do it!”