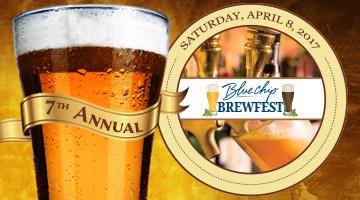 The 7th Annual Blue Chip Brewfest, the ultimate beer-tasting, will be held on Saturday, April 8. Don’t miss Blue Chip’s most popular event; guests can taste hand-crafted brews from around the world and meet famed brewmasters with live entertainment by the Allen Wronko Band. Tickets for Blue Chip Brewfest start at $45 and are available at ticketmaster.com or at the Blue Chip Gift Box. Guests must be 21 or older, with a valid state or government issued photo ID.