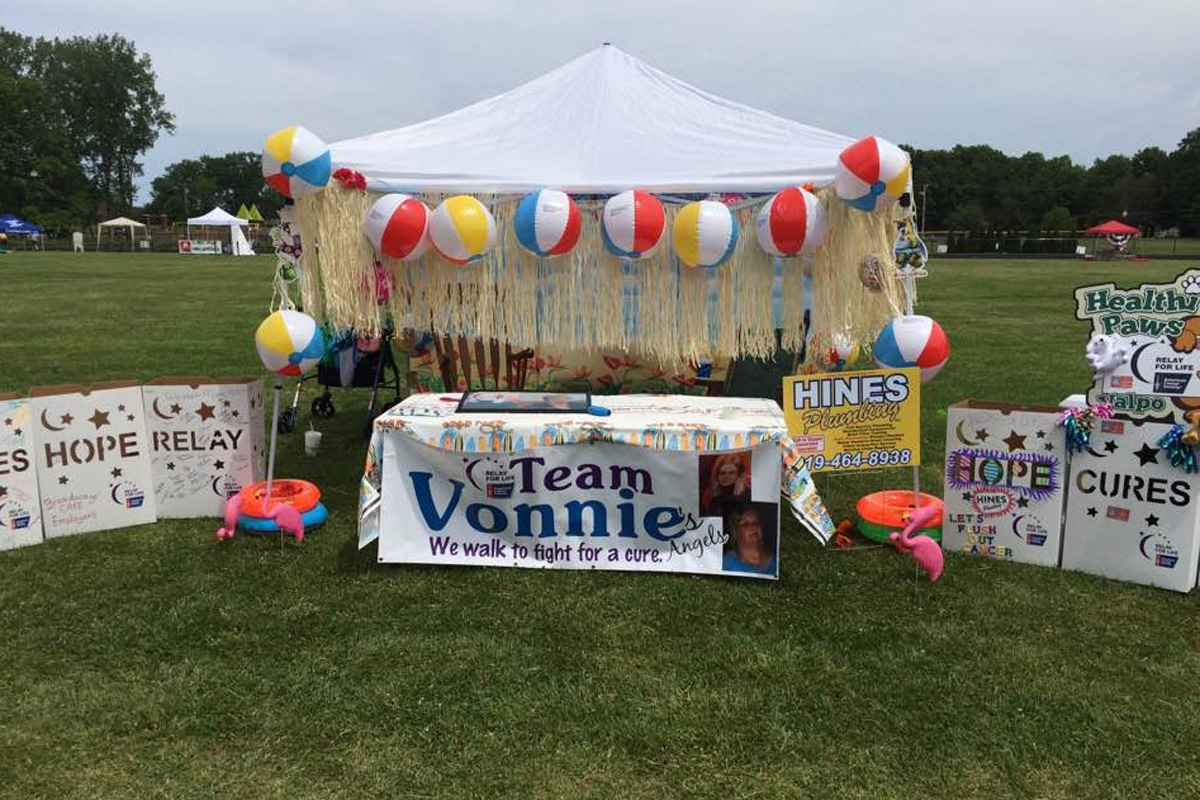 Relay for Life is a worldwide fundraiser that brings people together in a fight against cancer. The money raised through various events allows the American Cancer Society to continue invaluable research, provide preventative information to the public, and fund programs that serve patients from detection to remission.

For team “Vonnie’s Angels” and their sponsor in Hines Plumbing, the experience is a personal one.

The 2017 Relay for Life was Vonnie’s Angels' second year. Co-captains and sisters Debbie Hines and Kelli Stower and their mother, found the organization after their third sister, Vonnie Benton, passed away from cancer.

“Everything was the four of us,” said Hines. “Now it’s the three of us. Through Relay for Life we are keeping her name alive as well as helping as many people as we can.”

Benton was diagnosed with cancer in 2014. Hines had taken her sister to the hospital after months of unwavering illness and no answers. One-by-one her new physicians discovered another location her cancer had spread.

“For one week it was a different cancer everyday. It was everywhere. She was given one year,” explained Hines.

Benton spent that time surrounded by family. They supported her through chemotherapy, radiation, and a fatal diagnosis. In her final hours, they sat with her around the clock and held her hands in theirs.

The family knew that her death did not mean the fight was over. Through Relay for Life, they are keeping Vonnie’s name alive, uniting families touched by cancer, and making a difference in the medical field.

To support the team, Hines Plumbing and other sponsors, "buy" a box that the team will decorate and place along the Relay for Life track. It is promotion for the business but it is also a way for the businesses to show they care about their community and are getting involved.

“Jack is a good-hearted guy,” Hines said of her brother-in-law, the owner of Hines Plumbing. “He’s always there to help out when you need it. This donation shares just how much he cares.”

Through sponsorships and the fundraising events throughout the year, Vonnie's Angels were able to raise a little over $6,000 by the time of the Relay. They still have a Bike Race and a Garage Sale before the close of their annual itinerary.

The entire Valparaiso Relay for Life raised just under $60,000 this year, $10,000 more than the fundraising goal The community experience is as important to the families involved as is the money raised. “Vonnie’s Angels” will be back again next year.

“When you are doing each lap,” Hines said, “They are different. When you walk with the survivors you can feel that they have accomplished going through this horrible thing. The caregiver's lap is emotional because she isn’t here anymore. It is different for everyone, there is something for everyone. It’s a lot of hard work but it’s a lot of fun.”