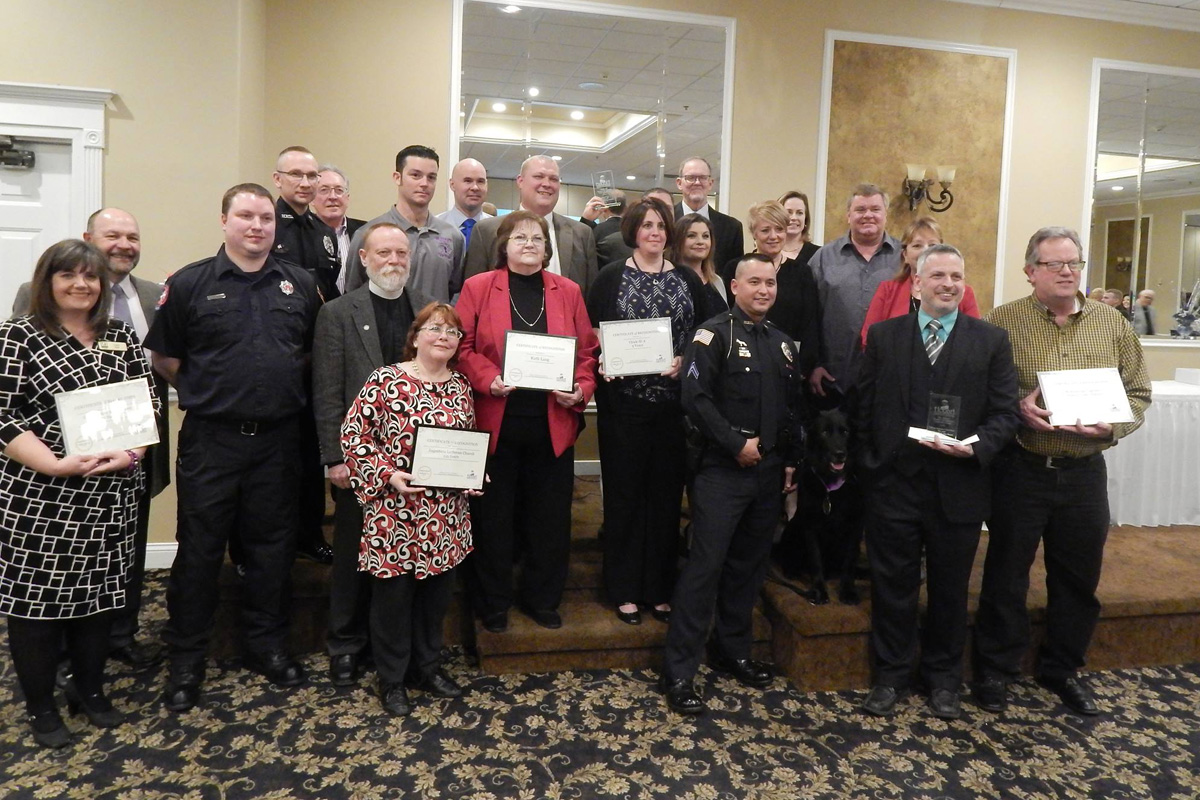 The Hobart Chamber of Commerce honored its members, the community, and all the hard work accomplished in the Lake County, Indiana city over the last year during the 2017 Awards Dinner, held on Thursday, February 23rd at Ambassador Banquets in Hobart.

Once again, it was an evening to honor and to thank the many individuals and organizations – and the Hobart Police K9, Scout – for their dedication toward making Hobart a better place to live and work.

At the dinner, Chamber President Chris Perez and Chamber Executive Director, Lisa Winstead, recognized membership anniversaries, gave out the notable Mayor’s Choice Award and chose individuals in the community for the Person or Business of the Year.

It was the first year that a City of Hobart Fireman and Policeman of the Year were chosen within the Mayor’s Choice Awards. Dave Henson of the Fire Squad and Officer Brian Taylor of the Hobart K9 Unit received the awards.

“This was very well received and a tradition we are going to continue,” Winstead said.

The K9 unit was awarded a $250 check, which was received with the help of Scout.

Rebuilding Together Hobart and Lake Station was recognized as an Legacy Award winner due to the organization’s hard work in the community.

Though the organization is no longer in existence, the volunteers who assisted the program were thanked for all the good they’ve done through projects such as helping low income families stay warm over the winter.

Ruth Lang of RE/MAX Pace Realty was also recognized for her hard work in creating the 4th of July Memory Book and designing new maps for the City of Hobart.

According to Lisa, his wife, Jeff does a lot of outside, not-seen work for the Chamber and truly enjoys giving back to his community.

Kevin Kosek won the Business Person of the Year Award. He is the Vice President of Marketing and Business Development at the Hobart REGIONAL Federal Credit Union.

“He picks a charity to donate to each month and promotes it at REGIONAL Federal Credit Union,” Winstead explained. “He chooses non-for profits who really need the funding, like Hobart Food Pantry.”

The Business of the Year Award was received by Tom Wish of Allstate Insurance.

“It was a really lovely evening, and everyone was thrilled, especially Scout,” said Dee Bedella, the Chamber Secretary and St. Mary’s Medical Center liaison.

Whether it is a day of saving lives, making a new business connection, or just simply checking another to-do list task off, the residents living in the City of Hobart spend each of the 365 days in a year doing good in the community.

Now, if we all could get a treat after our good work like Scout!