The State of Indiana recognized Hobart resident Mary Adams on Friday with the state’s premier honor for seniors: the 2017 Golden Hoosier Award.

The award was presented to Adams and 21 other recipients from across the state at a ceremony at the Indiana Statehouse on Friday, June 23. The program was emceed by Yonda Snyder, Director of Indiana Family & Social Services Administration (FSSA) Division of Aging.

Adams, 91, is one of the founders of the Hobart Food Pantry, now in its 35th year, and she still volunteers there at least twice a week. She has volunteered for decades at her church, St. Bridget Roman Catholic Church in Hobart, and at St. Mary Medical Center, where she works in the Pastoral Care department and fills in as needed at the Information Desk.

“It’s quite an honor. I am very honored and humbled,” Adams said of the recognition. “I’ve just been doing the things that I normally do and take for granted and enjoy doing. It’s not a chore for me. It’s not something I force myself to do. It just comes naturally.”

The Golden Hoosier Award began in 2008 and is a collaboration between the Office of the Lt. Governor and the Indiana Family and Social Services Administration’s Division of Aging, to acknowledge seniors who serve other Hoosiers in an exemplary manner.

“Today's event recognized 22 Senior Hoosiers whose tireless work has such a great impact on local communities. They are each examples of what a difference individuals can make when they give back, no matter how old you are,” said Lt. Governor Suzanne Crouch.

“Over 25 years, Mary Adams has dedicated more than 15,000 hours of service to St. Mary Medical Center, to our Pastoral Care chaplains, and to our patients and their families,” said CEO Janice Ryba. “Mary exemplifies the spirit of service and caring that our Auxiliary volunteers bring to our hospital every day. We appreciate her steadfast commitment to volunteerism both at St. Mary Medical Center and in our community, and we congratulate her on receiving the Golden Hoosier Award. It is a well-deserved honor.”

Adams began volunteering at St. Mary Medical Center in 1992. As of Friday, she had logged more than 15,700 volunteer hours for the hospital.

In addition to her many clerical duties for Pastoral Care, a department whose chaplains provide spiritual counseling and support for patients and families, Adams also participates in monthly memorial services for the families of patients who have passed. She served for many years as a Eucharistic minister who would deliver communion to Catholic patients.

“I love it,” Adams said of her work in Pastoral Care. “I like the interaction with people. I chose this and I made a good choice, I think.”

At the hospital, Adams has chaired the Auxiliary’s Breakfast with Santa Committee for the past 15 years, one of several recurring events she has helped to organize. Her work at St. Bridget’s has involved her in similar service and organizational activities.

Adams’s most enduring legacy in Hobart may be her involvement with the Hobart Food Pantry, which she helped to establish in 1982 in support of the families of striking local mill workers. 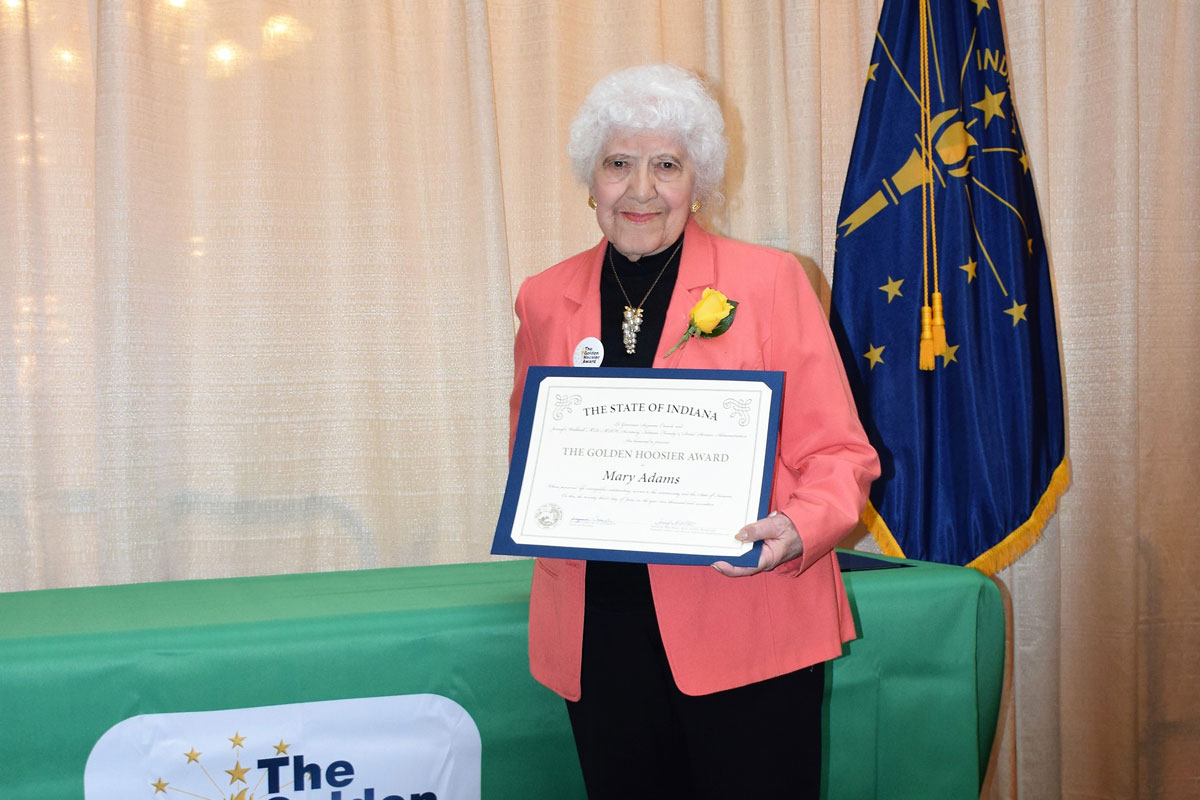 “It was supposed to be a temporary thing. It didn’t turn out to be that way,” she recalled. “We take care of about 150 families a week, and that’s just in Hobart. I still volunteer there at least twice a week.”

Adams was nominated for the Golden Hoosier Award by Teresa Pedroza, Director of Mission Integration for St. Mary Medical Center in Hobart and St. Catherine Hospital in East Chicago. Both facilities are part of Community Healthcare System.

“She is an inspiration and a great role model,” Pedroza said of Adams. “I believe that we find true happiness by looking beyond ourselves and asking how we can serve the people around us; to have a servant’s heart. I believe Mary has lived her life in this manner. She is dedicated to making her community better through all of her acts of volunteering, whether it be at the hospital, the food pantry, or her church.”

Adams attributed her decades of volunteerism, in part, to her cancer survivorship. She underwent cancer surgery at St. Mary Medical Center 25 years ago and made a full recovery with no need of chemotherapy or radiation treatment. Once she had recovered, Adams began volunteering at the hospital.

“This is kind of my way of saying, ‘Thank you for the opportunity.’ I feel I am one of the lucky ones,” Adams said. “You shouldn’t ignore that or take things for granted.”

“Mary is a blessing to everybody in Hobart,” said Sister Mary Ellen Goeller, former Regional Director for Mission Integration with Community Healthcare System. Goeller has worked with Adams throughout her years at St. Mary Medical Center.

“You ask Mary to do something, or to give something, and she’s right there to help. I’ll call Mary on a weekend, and she’ll help me,” Goeller said.

Adams said that her friends sometimes question why she continues to volunteer so much of her time into her ninth decade.

“Keeping active keeps me going,” she said. “I feel like what I am doing is worthwhile. I am my own person. I am fiercely independent. I like being that way.

“Hopefully, I am making a little difference somewhere,” Adams said.

To learn more about the hospitals of Community Healthcare System: St. Mary Medical Center in Hobart, St. Catherine Hospital in East Chicago, Community Hospital in Munster, and our physicians and services, visit comhs.org.