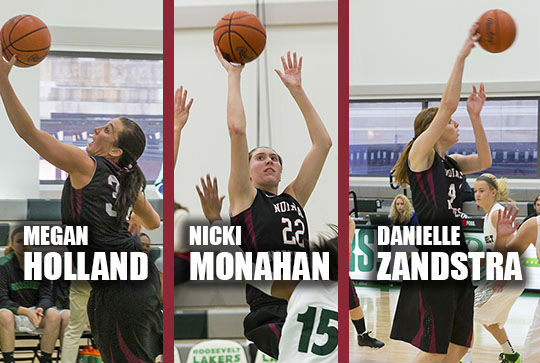 Megan Holland, Nicki Monahan, Danielle Zandstra and Head Coach Ryan Shelton headlined the A.I.I. Women's basketball Post-Season Awards banquet as each were honored as the Redhawks claimed their third A.I.I. Regular Season Championship in the past six seasons en route to a 23-9 overall record and No. 1 seed int he A.I.I. Tournament.

Holland was honored as the A.I.I. Conference's Player of the Year after averaging 19.3 points and 8.3 rebounds per game during the 2013-14 season in which she ranked third in the nation in field goal percentage at .592%. The senior forward registered a career high 38 points in a win over Robert Morris, a total that ranks third most in school history. Holland was also named to the A.I.I. All-Conference First Team.

RedHawks freshman sensation Nicki Monahan (Portage/Portage High School) was honored as the league's top newcomer after averaging 15.6 points and shooting .375% from long distance this season for IU Northwest. Her 598 points as a freshmen is second only to RedHawks' legend Sharon Houston in program history. Monahan's season-high 39 points in the tournament semi-finals is a single game freshmen and program post-season scoring record and second most points in a single game in program history. Monahan joined Holland on the A.I.I. Conference First-Team.

RedHawks junior center Danielle Zandstra got the nod as the league's Defensive Player of the Year while also garnering All-A.I.I. Second team honors. Zandstra ranked amongst the nation's leaders in blocked shots while averaging 7.0 points and 7.5 rebounds per game.

IU Northwest Head Coach Ryan Shelton received A.I.I. Coach of the Year honors for the third time in the past six seasons after leading the RedHawks to their best regular season (22-8) and home records (14-1) in school history. It was the third regular season championship and fourth 20-win season for Shelton and the RedHawks in his seven seasons as head coach at IU Northwest.