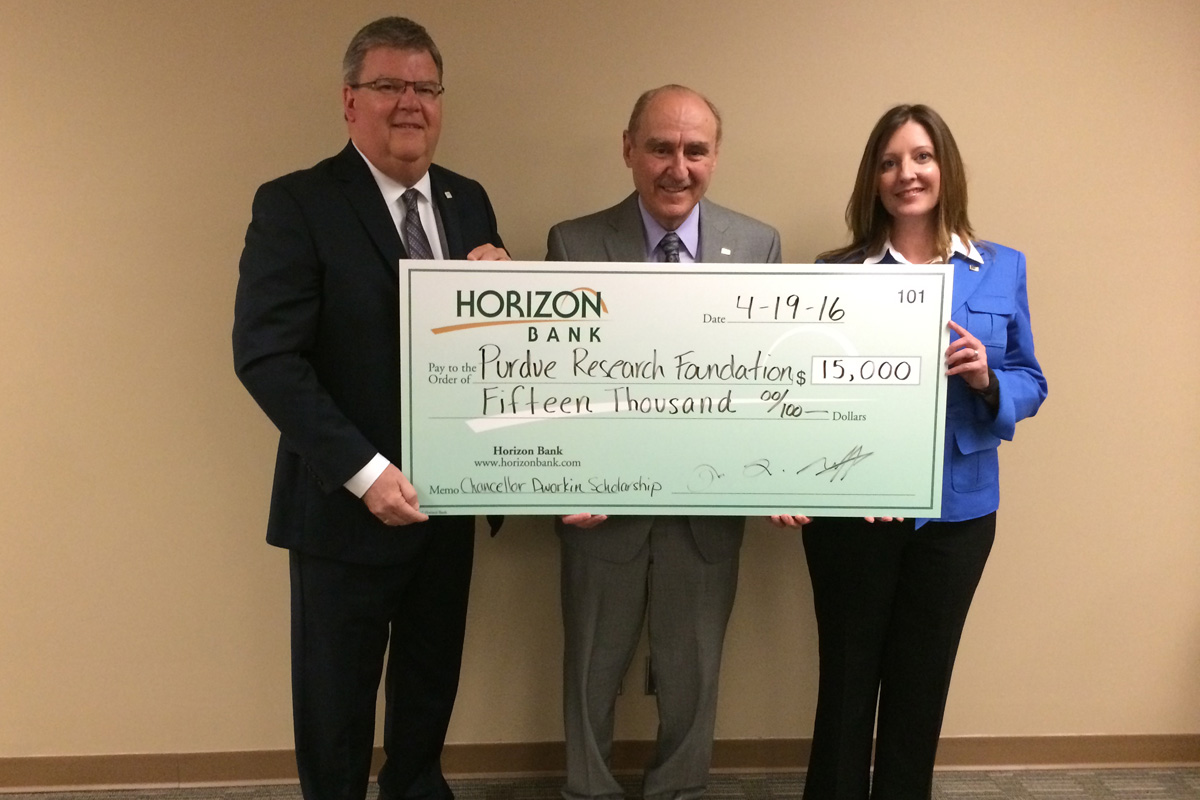 Horizon Bank of Michigan City announces a contribution of $15,000 to the Chancellor James B. Dworkin Distinguished Scholars Award, which will be used to provide scholarships for qualifying students of Purdue University Northwest.

The Chancellor James B. Dworkin Distinguished Scholars Award is an endowed scholarship fund, named in honor of the retiring Purdue University North Central chancellor. It was established by John Hoffner, a former colleague of Dworkin, to provide monetary awards for qualifying students so that they can attend Purdue University Northwest.

“Horizon Bank’s generosity not only honors Chancellor Dworkin’s legacy in Northwest Indiana, it gives students the opportunity to earn a Purdue degree,” said Marie Foster, Purdue University Northwest director of Advancement. “This scholarship will assist high-performing student leaders to attend both the North Central and Calumet campuses. As this endowment grows, Horizon Bank’s investment to these top students will create quite an impact on these campuses.”

Horizon Bank has been a visible supporter of higher education in Northwest Indiana and has helped to provide funding for activities that include: the annual Martin Luther King Jr., Celebration Breakfast held on the North Central campus; the Sinai Forum; The Purdue North Central College Bound program, student organizations and the Horizon Bank Chancellor's Leadership Scholarship.

Dworkin’s leadership and involvement in the community in more than 32 boards and commissions during the past 16 years has impacted many people in Northwest Indiana,” said Jim Neff, Horizon Bank executive vice president. “Horizon Bank is proud to continue Dr. Dworkin’s legacy by giving to the James B. Dworkin scholarship fund. Our investment will benefit PNW students and inspire them to become future leaders of our community.”

Dworkin has been considered a visionary and the driving force behind countless changes to the North Central campus, including increasing the baccalaureate degree offerings from six to 24, plus an MBA program, growing the student population to well past 6,000, enhancing the Concurrent Enrollment program to include about 3,000 students in more than 40 area high schools, creating the College Bound program for students in Michigan City, LaPorte, Portage Township and New Prairie schools and he helped to lead an effort to bring a public transportation loop to connect the campus to LaPorte and Michigan City to make the campus more accessible.

The Purdue University Board of Trustees recently named the James B. Dworkin Student Services and Activities Complex on the North Central campus in his honor, recognizing the significant impact that he has had on the campus and the substantial role that he playing to make the building a reality.

Dworkin’s entire career has been devoted to higher education and to helping students succeed. This scholarship will help to ensure that his legacy will continue for many years to come as students.