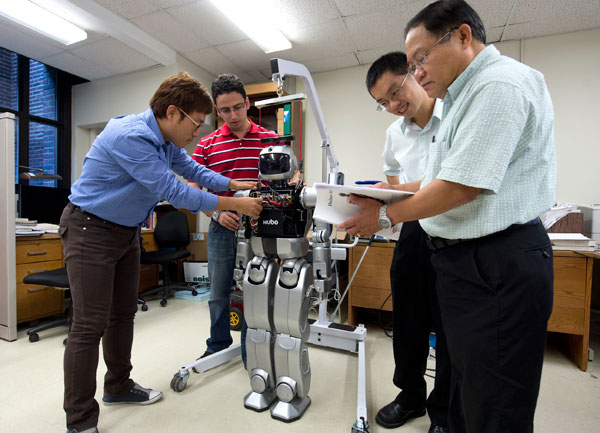 Purdue University is participating in an international effort led by Drexel University to create robots that could respond to disasters, including those involving radioactive or bio-contamination hazards.

The research is funded by the U.S. Defense Advanced Research Projects Agency (DARPA). The agency on Wednesday (Oct. 24) announced the DARPA Robotics Challenge to design the advanced humanoid robots.

"The idea is to develop robots capable of driving a vehicle, going to the disaster site, walking on various terrains, climbing up a ladder, opening doors, closing valves, using power tools and so on," said C.S. George Lee, a professor of electrical and computer engineering who is leading the Purdue portion of the research. "Each of the partners has a different role, and ours is to develop algorithms for the robot to climb an industrial ladder and traverse an industrial walkway."

Purdue will collaborate with Kris Hauser, an assistant professor of computer science at Indiana University. The Drexel-led group is one of seven teams in Track A of the Robotics Challenge. The challenge also includes teams in three other tracks.

The Purdue researchers recently received a HUBO II robot, which is 4 feet 11 inches tall, has humanlike hands, a Web camera and a gyro, and uses 38 motors for a wide range of motion. The robot is capable of walking, grasping and picking up objects, and other tasks.

"We are still learning the robot's capabilities," Lee said. "We will develop our own algorithms and program it to do what we want it to do. This project combines several types of research: computer vision, locomotion and balance control, and machine learning."

Phase 1 of the 27-month-long competition will last 15 months and culminate with a competitive challenge that will test the robots' ability to complete eight events. DARPA will then select teams to continue into Phase 2, for another head-to-head competition a year later.

The researchers communicate with the robot wirelessly. Doctoral student Andy Park has programmed HUBO II to perform tai chi. He used a Microsoft Kinect camera to capture himself doing the movements and then transferred the information to the robot, allowing the machine to gracefully carry out the captured motions.

The robot has two computers, one to process vision data from a head-mounted camera and the other to control the 38 motors. Although a stock HUBO does not talk, the robot could be upgraded to do so, Lee said.

The researchers upgraded the robot with a better camera and might install more powerful computer processors, he said.

HUBO II is manufactured by the Korean company Rainbow and was developed through research at KAIST.

"There is a concerted push to learn how to enable robots to respond to emergencies, to go into areas too dangerous for people, and that's the application behind the purpose of this challenge," Lee said. "However, there are numerous other potential applications for humanoid robots of the future, including space exploration, assisting the elderly and working side-by-side with people in various environments."

Purdue researchers are leading other robotics projects that are funded by the National Science Foundation.

"We are focusing on humanoid robots for research, education and outreach," Lee said. "The question is, how do you program the robot to function like a human? We are trying to have robots coexist with humans. That would open up many potential applications in manufacturing, health care, assistive devices, assisted living and so on."

"Robotics is very important to learn about from a career standpoint," Frederickson said. "There are growing commercial applications for robotics in many industries and research."

"The overall goal is to develop an environment where the robot and humans work and live together," Lu said. "We want to design new robots that work with people and that can adapt to a human environment."

Students working with Koh and Lu have visited middle schools as part of their outreach efforts.

"The robots are a big hit with some of the children," Koh said.