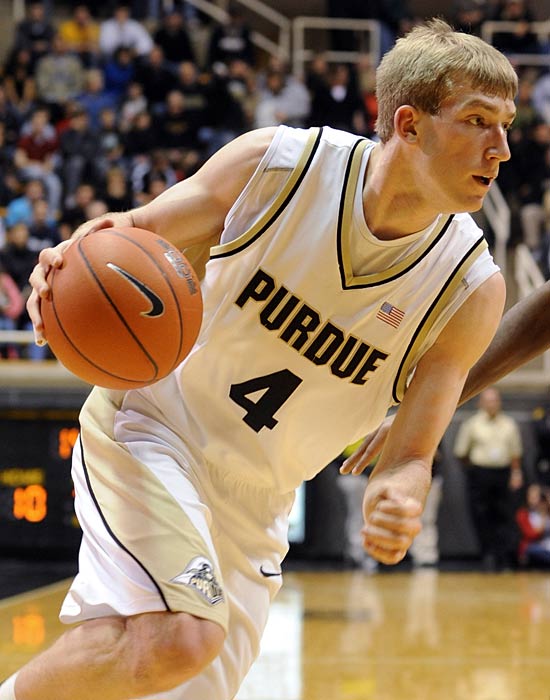 Purdue junior forward Robbie Hummel has been selected as one of only 50 players from across the nation to earn a place on the Naismith Trophy 2009-10 preseason watch list, released on Thursday by the Atlanta Tipoff Club.

The watch list was compiled by the club’s Board of Selectors, which based its criteria on players’ performances from the previous year and expectations for the 2009-10 season. The 50-player watch list featured 33 upperclassmen, including 19 seniors and 14 juniors.

Hummel’s selection is his second nod to a preseason watch list for a major award in 2009, as he and classmate E’Twaun Moore were chosen for the Wooden Award watch list in August.

The MVP of the 2009 Big Ten Tournament after driving Purdue to the title with averages of 16.0 points and 9.3 rebounds per game, Hummel was a third-team All-Big Ten selection a year ago and picked up first-team honors as a freshman in 2008. The 2008-09 season also saw the Valparaiso, Ind., native garner U.S. Basketball Writers Association All-District V honors for the second year in a row and earn his first appearance on the Academic All-Big Ten team.

Hummel represented the United States in the World University Games following his sophomore season, leading Team USA to a bronze medal in Belgrade, Serbia. He enters the 2009-10 campaign with career averages of 11.9 points and 6.5 rebounds per game.

In late February, the Atlanta Tipoff Club’s Board of Selectors will compile a mid-season team of the top 30 players in the nation, and the list will be narrowed to four finalists in March. The Naismith Trophy will be awarded at the 2010 Men’s Final Four in Indianapolis.