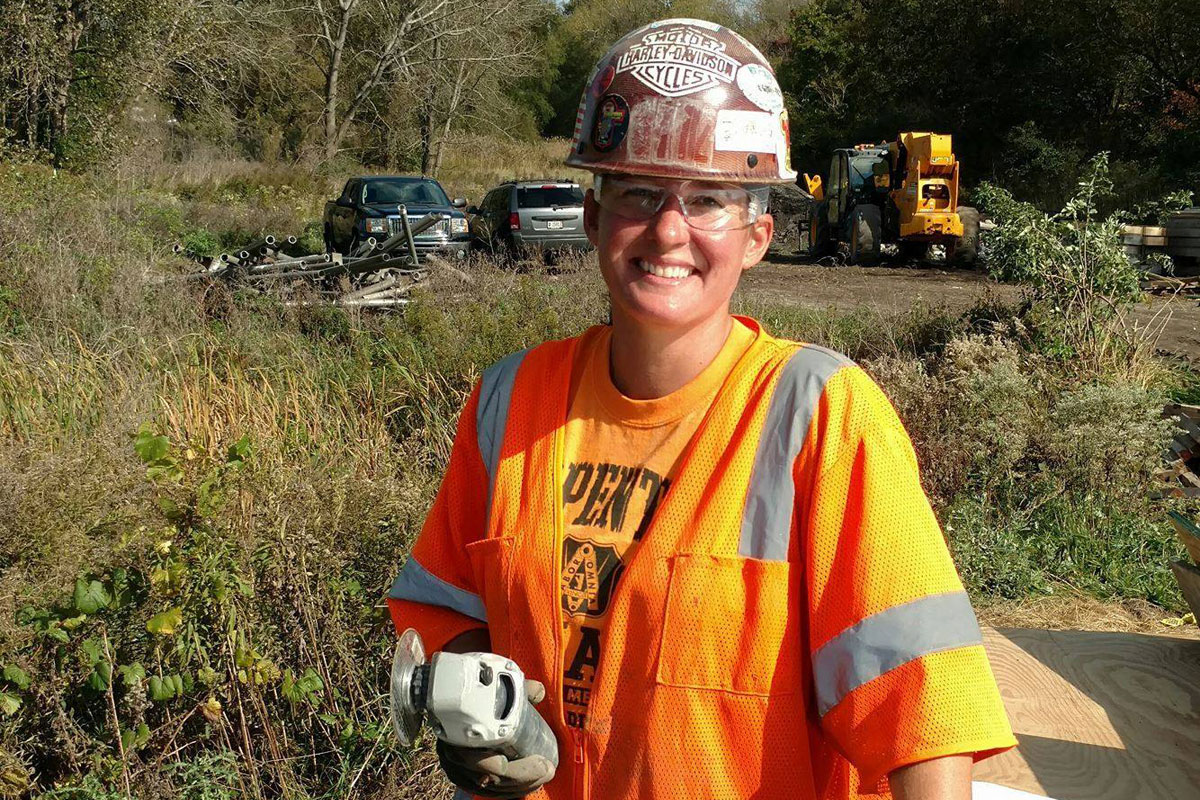 When it comes to union workers, the growing impact that women, and the sisterhood of those women as a collective, has been playing a greater part in shaping the future of Northwest Indiana’s workforce. The Indiana Kentucky Ohio Regional Council of Carpenters (IKORCC) is proud to welcome female apprentices into their training program which helps to grow the diversity of their membership and build a strong union in the region, and the Midwest.

One union member, Tessa Anderson, is a Hobart-native who is a certified welder and Journeyman Carpenter with the IKORCC Local 1005. She received her training at the IKORCC Training Center in Hobart from nationally recognized experts in the field.

“I’m currently working out on the toll road bridges doing concrete work and welding,” Anderson said. “I’ve been in for about four and a half years and I just became a Journeyman back in July so I had my graduation on October 1st.”

For Anderson, joining the union was a bit of a change from the career path that she was on.

“I went to college and got my associate’s, bachelor’s and almost my master’s, then I joined the union,” said Anderson. “It was a little bit of a change of plans.”

When Anderson was in school an instructor gave her some advice that opened her eyes to the idea of joining the union.

“One of my instructors told me that I needed to go and try and work for the union because I empathized a lot with the working class,” Anderson said. “I did human resources for a living and the companies I worked for, they just frown on you for being pro-employee.”

Anderson thought that to earn the respect and the trust of her fellow union members she would need to be out there doing the physical labor along with everyone else so that’s the route she decided to take.

“I needed to be out there swinging a hammer and be in the same environment because I plan on working my way up through the union. That’s always been my plan from day one and even in college I did some construction on the side. I’ve always enjoyed building things.”

“You have to show them and work twice as hard to prove yourself,” said Anderson, who has family that have worked in the trades. “It’s definitely different working with men. I may not be as strong as the guys but it seems like I think things out and have a little bit more patience when it comes to putting together a plan.”

For Anderson, who is a single mother, the benefits of being a Journeyman with the Local 1005 were a big factor in her decision to join.

“We have a pension, an annuity, health insurance and life insurance,” said Anderson in talking about those benefits. “We have a pre-tax vacation fund which is kind of like a rainy day thing. There’s also a sense of brotherhood, although it doesn’t sound like a ‘benefit’, that gives you a little more of a sense of pride. With union guys, they’re more like a family. It’s a big benefit when you feel like you belong to something.”

“The biggest thing is that with this career, you’re able to support yourself,” Anderson said when speaking about younger girls who might be interested in taking up a trade. “It’s a lot different than it used to be where families had one breadwinner. A lot of families have single parents and I’ve been able to support my family by giving them the things they want, and the things they need.”

“It was very difficult for me to do that in my other career. I’ll be able to actually retire at some point with the pension and the annuity. The earlier you get in, the better. There’s people who are retiring in their 50’s who are having fun and able to go out and do things while they’re still able. There’s no too many jobs where you can do that!”

Eric Yuhasz, Local 1005 Secretary and IKORCC Representative, spoke about Anderson and bringing a younger generation of women into the trades.

“She’s (Tessa) been bringing up the sisterhood side of things,” said Yuhasz. “They have their own council coming up for the first time ever so Tessa is attending to represent our area. I’m really honored that Tessa stepped up to the plate and wants to be that person for us. I can’t say enough good things about her.”

“When I do attend these career days in high schools, the women will ask more questions than the guys. An female instructor attended a couple of those career days with me and it kind of opened the door for those women to be a little more comfortable and the questions just started coming out,” said Yuhasz, who expects their number of female union members to rise in the future.

“There’s a spot for everybody,” Yuhasz concluded. “They do a great job and they can make a great career out of this. It doesn’t matter whether you’re a man or a woman, what you put into this is what you’ll get out of it.”