Indiana Beverage has been a family owned business for 75 years in Indiana, since the year 1939. So, to owner Jeff Leetz, the prospect of expanding on Indiana Beverage’s storied reputation for distributing world-class beers by partnering with the Gary brewery, 18th Street Brewery, was too good of an opportunity to pass up.

“We wanted to be part of his story. Drew Fox has built something amazing and has created a unique and fun destination for beer lovers to come to enjoy, not just the beer, but also the food and atmosphere. We want to look for people to make an impact, people with passion and vision, when it came to 18th Street Brewery, we really wanted to be a part of it,” said Leetz about the brewery.

Indiana Beverage has a great interest in local breweries, and though it has partners from far and wide, being a part of the stories of committed local businesses has always been something they have been passionate about. The 18th Street Brewery has grown to be Northwest Indiana’s second largest craft brewery in a relatively short period of time, something that is hard not to notice in an extremely competitive industry.

“When Drew opened the business, he opened really strong and had a lot of street cred from right out of the gate. They were just really a legit brewery from the very start. Drew has fantastic credibility with beers, not just locally, but globally,” said Leetz of the 18th Street’s reputation in the beer scene.

For Drew Fox, success didn’t always seem so instantaneous. Fox wanted to become a brewer after trying some excellent beer in Belgium and really wanted to bring that style and craftsmanship to the region. However, Fox describes his first batch as having a rather unpleasant smell and taste.

“It really wasn’t good, it smelled like a bathroom,” said Fox.

However, he started, and his passion and determination kept the quality of beer rising until they had their first big hit, Sinister DIPA, which was released in 2013. 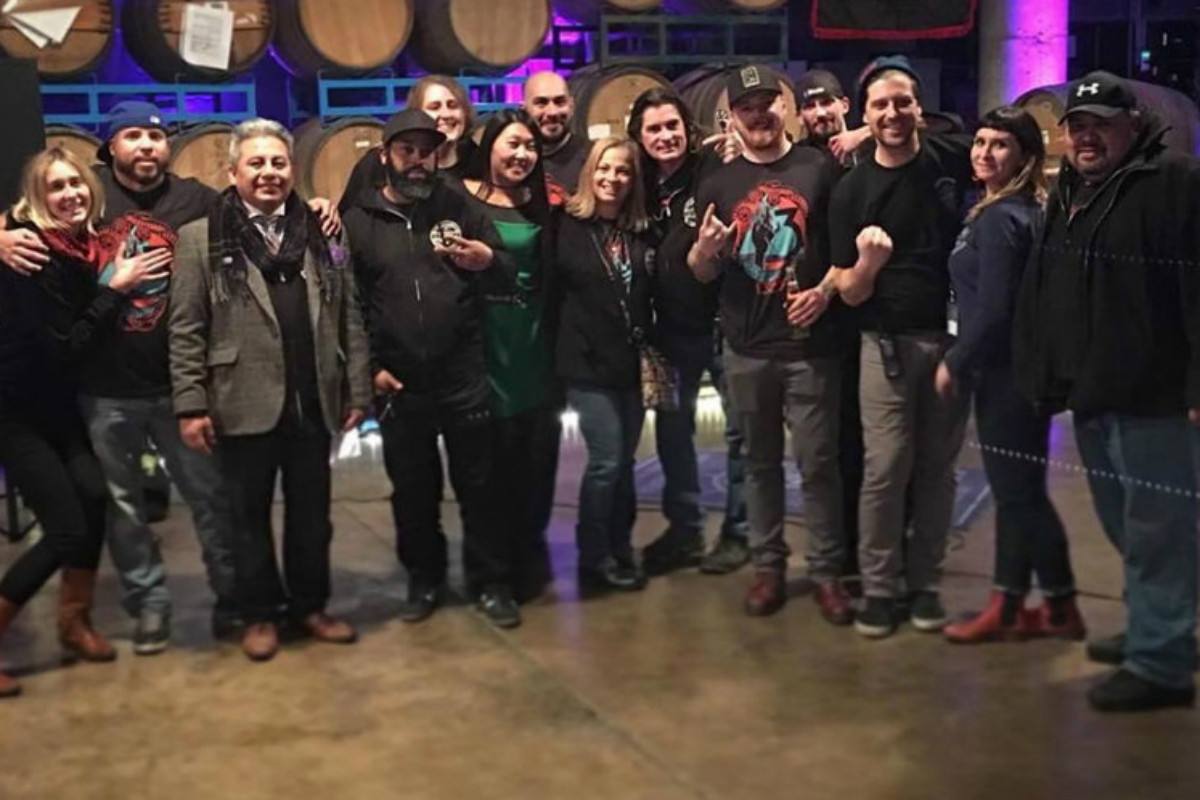 Fox opened his first location in an old dry cleaners in Gary in 2013 and soon outgrew that space, opening a second location in a warehouse in Hammond, which now houses their production, packaging, barrel program, a taproom and a full service kitchen. Their original location in Gary is now a taproom and craft cocktail bar and kitchen.

“We reached out to Drew about two years ago and started inquiring about a partnership not long after he popped up on our radar,” said Leetz.

With such a meteoric rise and rapid regionwide renown, it’s no mystery why 18th Street was drawing a lot of attention to themselves, but it wasn’t the beer alone that helped the rise of this amazing brand, though it was, of course, the central attraction.

“I knew they would make a big impact on our local region; Drew knows a lot about great beer and flavor, and between Drew’s talent and his partner Joey Potts’ great art work which really brings the beer to life for the consumer, we knew they would be a big deal. I was really excited to partner with them, I’m an artwork guy and Joey brings the beer to life. Their attitude and edginess just adds to the draw. 18th Street is unique. They’ve got fantastic beer. But behind that is an incredible person to bring it to life,” said Leetz.

Brand Manager at Indiana Beverage, Matt Johnson, who deals more closely with craft breweries and with 18th Street in particular, was also very excited about the opportunity to work with such a talented company.

“I think the biggest factors here are the quality in beer, the culture, and the passion for what they do. It’s a lot of the same qualities we at Indiana Beverage try and convey. The crew at 18th Street live it and we love that,” said Johnson.

Fox didn’t want to go with just anyone as a distributor though, he had a very specific idea of what he wanted in a distributor for the beers he had worked so hard to make a success.

“It took a while to find a distributor. I needed someone to know the product like we do and treat it as their own. I found that in Indiana Beverage,” said Fox.

Asked what he liked most about the brewery Johnson didn’t mince words:

“The obvious answer: The Beer! The honest answer is the people though. They have amazing people at 18th Street. Drew has a great crew working for him and they are great to work with. The marketing they put out is also top notch but it all starts with their people,” Johnson said emphatically.

When it comes to the benefits for both companies, there are a lot of positives for each of them in such a partnership.

“It was an opportunity to bring his brand to a lot of people. We see ourselves as additional story tellers, not just beer distributors. We take world class beers, art and story to the entire market of Northern Indiana, which includes a potential 3,000 accounts a week,” Leetz said. “We provide the service, distribution, and support that they would need to have growth and success.”

Johnson too was enthusiastic about the future of the relationship and what it means for both companies.

“It gives us an amazing local brewery to go to our retailers with,” he said. “People love great, high quality, local beer and I believe its beneficial to 18th Street, as well as it gives them time to focus on brewing, marketing and spreading the 18th Street story.”