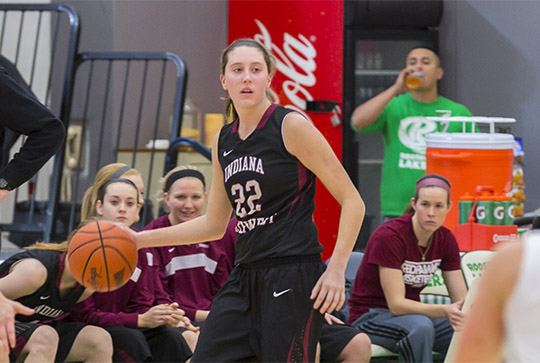 Indiana Northwest have announced their 2014-15 varsity women's basketball schedule. The RedHawks will tip-off their season on Oct. 29 when they travel to Goshen, IN to take on the Goshen Maple Leafs. Later that week IU Northwest will play host to the Saint Francis (IL) Saints on Sat. Nov. 1 for their season opener and 2014 Homecoming game.

The RedHawks will participate in the first of two weekend tournaments in November when they travel to Wisconsin to the Viterbo University Tournament on Nov. 7 and 8 and later to Bourbonnais, IL on Nov. 21-22 for the Holiday Inn Classic to face 2014 NAIA National Tournament Qualifier and host Olivet Nazarene.

IU Northwest will play home and home dates with IU South Bend, IU Kokomo, University of Cincinnatti-Clermont, Robert Morris-Chicago and Andrews University during the 2014-15 season. January will feature three matchups with National Tournament Qualifiers including a home date with Olivet Nazarene on Jan. 3, a rematch of the A.I.I. Championship game on Jan. 10 with Ashford and a road test with national power Saint Xavier on Jan. 14.

Conference rivals will collide when the RedHawks meet Rochester for a home and home and then later road dates with Wilberforce University on Jan. 31 and the Ashford Saints in Clinton, IA on Feb. 7. The RedHawks schedule will feature 13 home dates at the Savannah Center where they were 14-1 a season ago setting a school record.

It all leads to the A.I.I. Conference Tournament on Feb. 26-27 in Espanola, New Mexico where they will look to take it one step further to the 2015 NAIA National Tournament in Sioux City, IA.