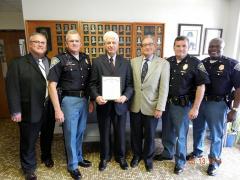 Fotia is a native of Hammond and graduated from Bishop Noll High School. The Indiana State Police hired Paul in February 1969 as a radio operator for the Schererville Post (no longer in existence). Fotia was selected as a recruit for the Indiana State Police and graduated from the police academy in April 1972 and was assigned to the Dunes Park Post in Chesterton. He transferred back to the Schererville Post in 1974 where he served until August 1977 when the Dunes Park and Schererville Posts were closed and the new Lowell Post opened.

Fotia was assigned as an Area 1 detective in 1978 and in August 1993 he was promoted to Sergeant as a Firearms Examiner assigned to the Lowell Regional Laboratory.

During this time Fotia attended Indiana University Northwest where he earned a Bachelor’s Degree in Management and Administration.

In 2006 after retiring from the Indiana State Police as an officer, Fotia was selected as the Lowell Regional Laboratory Manager a position he still holds today.

During Fotia’s tenure he has earned a million mile award, been on the Tactical Intervention Platoon, was involved in various federal and local task forces, is a member of the Association of Firearm and Tool Mark Examiner and the Association of Crime Laboratory Directors. He was also awarded the Sagamore of the Wabash award by Governor Bowen and in 1975 was given the Silver Star Award.

Fotia resides in Lake County with his family.