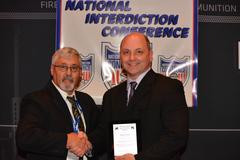 Trammel received an award for having the largest seizure of Khat (forty pounds) in the United States in 2013.

On January 29, 2013 Trammel stopped a 2012 Toyota Corolla for a traffic violation on I-65 south bound at the 222 mile marker (this is two miles south of the Winamac/Fair Oaks exit). While speaking with the occupants he became suspicious of criminal activity. Trooper Trammel (who is also a canine handler) walked his K-9 partner Ryker around the vehicle to which Ryker alerted. A subsequent search of the Toyota revealed a bed sheet in the trunk covering something. Upon opening the sheets bundles of Khat were located. Khat is a flowering plant that is mostly grown in the Horn of Africa. It has a short shelf life (normally within two weeks) before it starts to lose its potency. Users of Khat usually chew it for the “stimulant-euphoric effect” it has.

The conference is a collaboration of National Criminal Enforcement Association and Desert Snow. The conference conducts training ranging from conducting a traffic stop, to hidden compartments and Mexican cartel information.

Trammel was able to attend by the generosity of the Domestic Highway Enforcement (DHE) which is an initiative of High Intensity Drug Trafficking Areas (HIDTA).

Trammel is assigned to the Lowell State Police Post and works Newton and Jasper Counties.