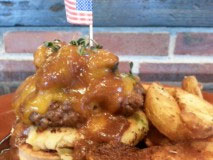 John Pinder was a United States Army soldier and recipient of the United States Military's highest decoration- the Medal of Honor-for his actions on D- day, in 1944. Pinder landed 100 yards off shore on the coast of France under devastating enemy machine gun and artillery fire. Struggling through the water to get to shore he was struck by enemy fire and gravely wounded. Never stopping, he made it to shore to deliver the important radio equipment he was carrying. Refusing to take cover and get medical attention, weakened Pinder kept going back into fire to salvage more communication equipment. On his 3rd trip he took bullets to his legs from machine gun fire. Still not stopping, he went on to establish vital radio communication on the beach and while doing so was shot a final time and killed. It was John Pinder's birthday...We Salute Pinder's indomitable courage, dedication, and inspiration to the men with whom he served...