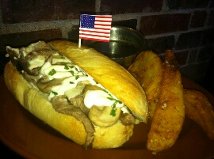 Served with your choice of garlic potato wedges or sweet potato fries.

George Westinghouse Jr. was a spunky teenager with a head full of ideas and proved throughout his life to seize opportunity after opportunity to make technology better, faster, and more efficient improving the way people live. At the age of 15, George enlisted in the New York National Guard as the Civil War broke out. He later resigned to join the Navy through the end of the war. After his military discharge, he enrolled at nearby Union Collage, only to drop out after losing interest during his first term. His career started at the age of 19 with his first invention, the rotary steam engine which was the first of many other devices that he invented particularly for railroads. In total, Westinghouse developed over 300 inventions to his name as well as winning the "electrical current war" against his competitor Thomas Edison with the "alternating current" electrical system that he licensed patents from Nikola Tesla to achieve. Westinghouse had a desire to turn ideas into enterprises, founding Westinghouse Electric and 59 other companies, receiving over 100 patents for his work. George was a prolific inventor who changed the course of history by enabling the growth of railroads through his inventions and by promoting the use of electricity for power and transportation...