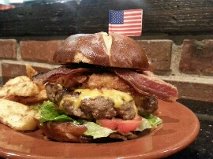 The "MacArthur" Burger - $13.95
We have taken our Classic American Burger and reinforced it with lettuce, tomato and crispy bacon. Topped with fried Mac & Cheese and drizzled with ranch. Served on a pretzel roll. Served with your choice of garlic potato wedges or sweet potato fries.

Raised in a Military family in the American Old West, Douglas MacArthur was valedictorian of the West Texas Military Academy and First Captain at the United States Military Academy at West Point where he excelled and graduated with honors in 1903. He served in WWI and was promoted to Major and assigned to intelligence units, but after the United States declared war on Germany, he was promoted to Colonel and put in command of the 42nd Division. Years later, he was recalled to active duty during WWII and became an American General and Field Marshal of the Philippine Army and Chief of Staff of the United States Army and became Commander of U.S. forces in the Pacific. In 1945 at the end of the war, President Truman appointed MacArthur Supreme Allied Commander and was placed in charge of the formal surrender of Tokyo. For the next 6 years he remained in Japan to command the occupation forces there and to oversee the rebuilding of the country. He received the Medal of Honor for his service in the Philippines Campaign which made him and his father, Arthur MacArthur Jr., the first father and son to be awarded the medal. He was one of only five men ever to rise to the rank of General of the Army in the United States Army, and the only man ever to become Field Marshal of the Philippine Army. We Salute General MacArthur for his contribution to a stronger America and his role in winning the 2nd World War.