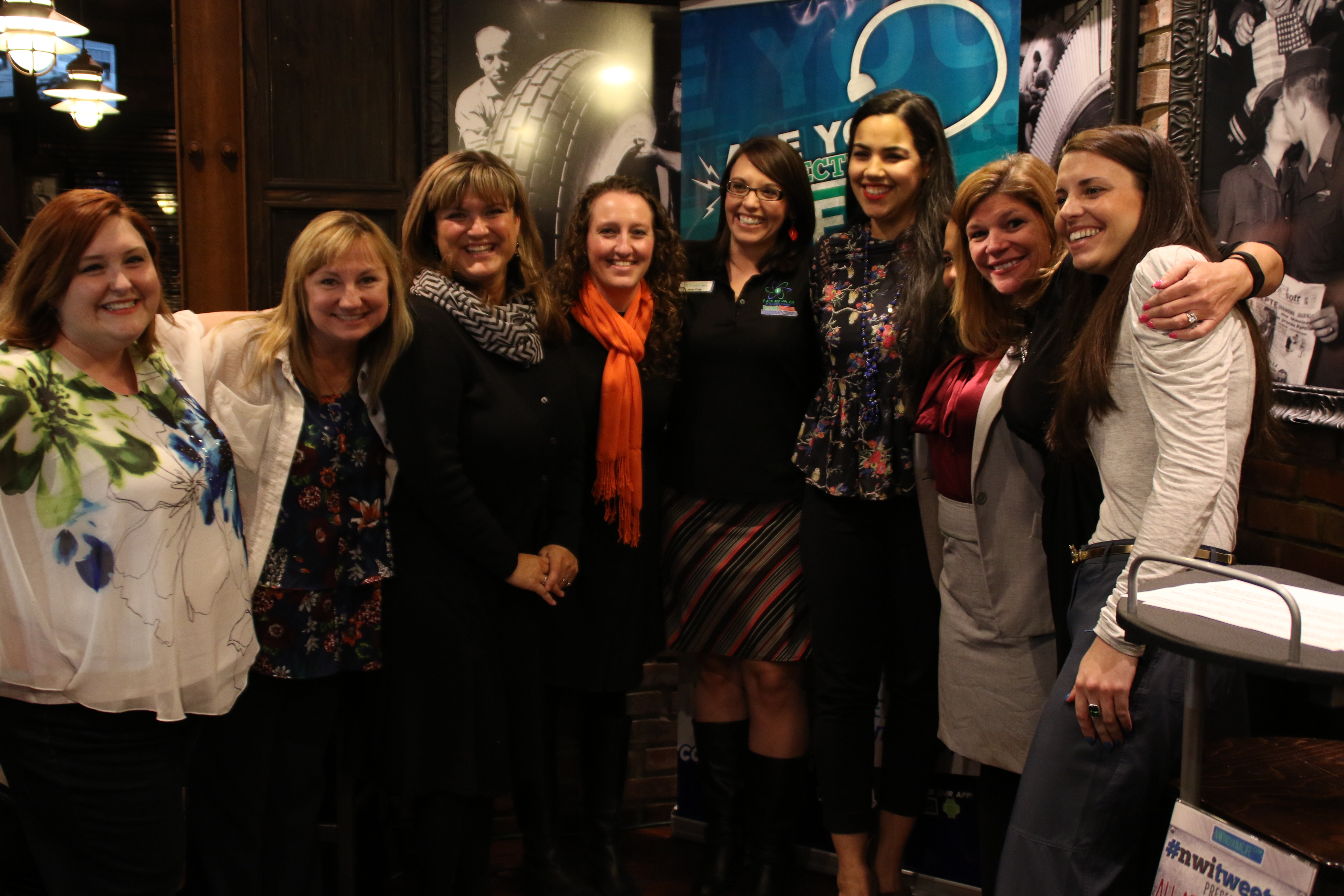 The Tweetup is back, and this time the women were there to show everyone else how it’s done.

On April 7th at Industrial Revolution Eatery & Grille, Ideas in Motion Media hosted over 100 people to celebrate some of the Region’s most inspirational women at the company’s April #NWITweetup. Women (and men alike) crowded in the restaurant to hear eight different women give speeches, have a good night out with new and old friends and to experience why Ideas in Motion Media was all about the girls.

#NWITweetups aren’t a new or rare occurrence. The Tweetup has been going on for several years, and first started when a group of people wanted to get together, eat, drink and talk outside of their main communication through social media. Over the years the Tweetup has become ever changing with each meetup bringing something new and fresh to the table. For the spring #NWITweetup Ideas in Motion Media’s Jenny Craig-Brown and CEO Chris Mahlmann decided to turn things up a notch by making the tweetup #AllAboutTheGirls, and also showcasing a handful of them by letting them give a short speech.

“Tonight our sole focus was on the incredible women here in Northwest Indiana.” explained Craig-Brown - who also acted as emcee for the night.

“This idea came up in a meeting one day on when we were thinking on what to do next, and as soon as I got ahold of that idea, I took it and ran with it. All of the women that I know are amazing, inspirational and extremely hard workers and why wouldn’t we want to put some of them in the spotlight? I couldn’t be happier that the idea worked and that we’re here tonight celebrating it.”

In total there were eight women selected to give speeches that night, which included: Erin Parker, teacher at La Porte High School; Blair Milo, Mayor of La Porte; Darlene Cohn, founder of D. Cohn Communications; Nancy Simpson, Office Manager for the Greater Portage Chamber of Commerce; Heather Ennis, CEO and President of the Northwest Indiana Forum; Celina Weatherwax, Communications Director for Congressman Pete Visclosky; Shellie Dell, Marketing Manager for the Lake Area United Way; and Norma Serrano, Owner of Excellence by Design. Each of the women gave a short and wonderful speech on how social media and online communication has bettered their lives. Standing before the Tweetup’s biggest ever crowd, one by one each woman gave a reason that spanned from first realizing their love for social media through their blog, to noting that one little video made by high school students can change lives and be seen across the world.

Once the last speaker was finished, and the final round of applause was given out, all of the eight speakers and their hostess huddled around each other to congratulate everyone on their speeches. It was evident that every woman in that circle was there for the same reason as the audience - to witness first hand that Northwest Indiana has an immense amount of powerful women within its borders.

Many of the messages stressed the importance of social media as a tool for not only communication, but for expanding our world and connecting with others as well.

“We like to think the screens as alienating, we like to talk about how people think that social media is alienating society from other people, but in my opinion that’s not at all the way it works," said Darlene Cohn. "In my opinion the way it works is that it breaks down barriers of insecurity, of being scared to walk across the room and say hello to someone you’ve never talked to before."

Nancy Simpson credited social media as an essential tool in how she communicates with members of the community on a daily basis.

"As we see a growth in the city it’s all a part of the collective effort of these different organizations and that collaboration is so critical to us across the region. Social media is such an important tool for us to utilize so that we can reach across the region, state and country,” said Milo

Norma Serrano also credited the strength of social media and its ability to give a voice to those who need it most and act as a source of inspiration and hope.

"Online communication has done so much for [the women of Excellence By Design] because the women who absolutely need to be in the fore front, the women who need the most support can get that,” said Serrano.

Heather Ennis also credits social media as a major inspiration in her life.

“Social media inspires me. Hearing other people’s stories, seeing what other people are going through, seeing their struggles and what they’re going through every day makes me a better person, said Ennis. " Social media inspires me to do more, it keeps me excited, it entertains me and it keeps me humble. It also reminds me that the thing you do matter and people will remember those good things for a long time.”

“Read it, re-read, and read it again and if it’s not positive don’t post it. It’s not worth sharing. No one has time to read a negative feed.” or “I’ve got a niece that graduated from Purdue last year and we were talking about tonight and hypothesizing: If you had the microphone what would you say? What she said was awesome," said Shellie Dell. "She gave me three little words: “Keep good going.” That’s what I’m going to leave with, ‘Keep Good Going’ and I hope you’re up for the challenge.”

Erin Parker, who spoke on her experiences through teaching at La Porte High School, said that being in the company of the seven other women was a humbling experience.

“I was very honored to be one of the women who got a chance to speak tonight.” Parker stated. “All of them are really strong and empowering and I can’t believe I was amongst that group. As a teacher I look around them and feel empowered and inspired, and I want my kids to be able to see that anyone can do great things. Events like tonight really show that, especially for the younger girls here.”

It wasn’t only the eight speakers who had a great night, all of the people who came did as well. Dave Woodson, who has been coming to every tweetup since its conception, said that the #AllAboutTheGirls tweetup was the best yet.

“This time is a little different, but it’s interesting and great to hear what all of them utilize the internet.” Woodson said. “It’s also amazing to see that so many people were interested in hearing that as well, so much that they came. When I got here the parking lot was filled up to the brim already. I got to see a ton of new faces that I didn’t see at the last Tweetup, and I got to see all of the people I connect with on Facebook but not in our everyday lives. It’s been a fantastic night.”

There’s no notion on what the next Tweeup will be about, where it will be, or who will be in the spotlight next time - it’s for certain, though, that the #AllAboutTheGirls tweetup was a masterful success and a wonderful good time. It has truly set the bar for other tweetups in the future, and really showed that tweetups do work at any time of year but especially when there’s incredible women to back it up and knock it out of the park.

Celina Weatherwax felt that the future success of the tweetups relies on collaboration and big ideas brought to reality.

“Us women, and the men also here with us tonight, share the commonality that we want to push the region forward and we do that through our shared visions," said Weatherwax. "All of us, especially the women I work with on a daily basis, tend to multitask but we also like to think big. I feel that if we were to collaborate even more so than what we do now we could really have endless options ahead of us.”