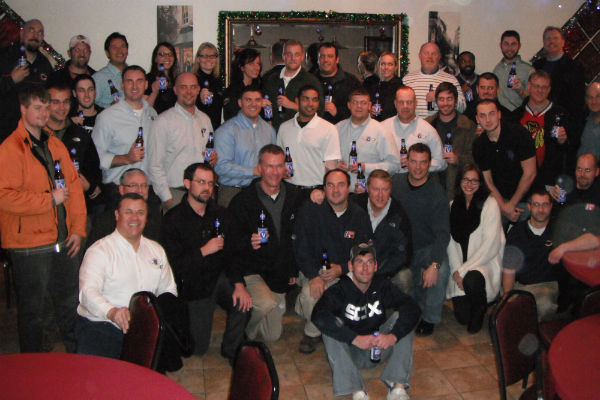 All hands were on deck for Indiana Beverage’s celebration for the launch of Veteran Beer Company products in Northwest Indiana on Tuesday, December 3rd.

Held at Langel’s Pizzeria in Highland, the event heralded the invasion into the region of both of Veteran’s current offerings: The Veteran, an American lager, and Blonde Bomber, an American blonde ale. Everyone from sales reps and brand ambassadors to VP’s and directors from both companies were in attendance to celebrate.

Bob Jacobs, vice president of sales and marketing for Indiana Beverage, opened with some remarks on the strength of Veteran Beer Company’s mission and reported that in less than a day they had already sold over 700 cases.

“When [President and CEO of Veteran Beer Company] Paul Jenkins walked in, we knew this was something special. We knew this was more than just another brand of beer. Now that we’ve had a chance to try them, we know these are great beers and they will stand up to the rest. But more importantly, this mission and what these guys are doing is really something special.” 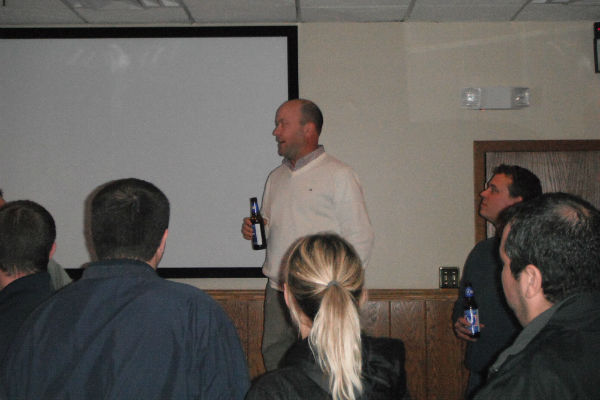 Veteran Beer Company, which brews out of Cold Spring, Minnesota, recently partnered with Indiana Beverage to distribute their products throughout northern Indiana. Beyond just being military veteran owned and operated, VBC is actually classified as a class-B corporation. “That means that 10% of our net profits at the end of the year go to a charity. In our case, that money goes to charities for veterans,” John Herman, director of operations in northwest Indiana later explained.

Jenkins also took the floor to thank everyone involved and to make a point of his appreciation for Indiana Beverage and the strong reputation the distributor has made for itself. “I wish I could replicate you guys in other states that we sell in,” he said. “We’re proud to be partnered with Indiana Beverage.”

Once the speeches and toasts were done, everyone present got to relax over some appetizers and, of course, Veteran beer. Nick, a sales rep for Indiana Beverage, said that it’s unusual for a company to introduce a blonde ale in their initial offering but that, in his opinion, “This will do well. This is good.” 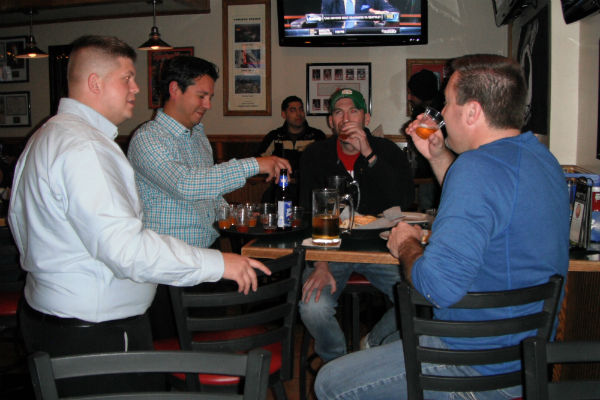 The company is on a mission to employ and support veterans, and from the determined look in their eyes and the way they talk about their beer, it’s obvious that it’s a mission they take just as seriously as they take their brews. Speaking with Jenkins in person, he conveyed a clear and present passion for detail in every aspect of the brand, and according to him the same can be said for Eric Rine, the company’s brewmaster.

These liberators of libation were welcomed wherever they went throughout the crowded pizzeria and bar. Polling the general populace after the samples had been distributed returned unanimously favorable impressions. Locals Greg and Dave appreciated the craft beer taste. Another customer, Jesse, said that although he thought it compared with a lot of domestic brands, the Veteran’s superior aftertaste gave it an edge over the competition. Jim and Debra, a couple out for the evening, were split over which was better but agreed that both were “good products from a good company.”

It was a great day for Veteran Beer Company, Indiana Beverage, and beer lovers alike, and Jenkins promised reinforcements, in the form of two more carefully crafted brews, are expected to be introduced in 2014.