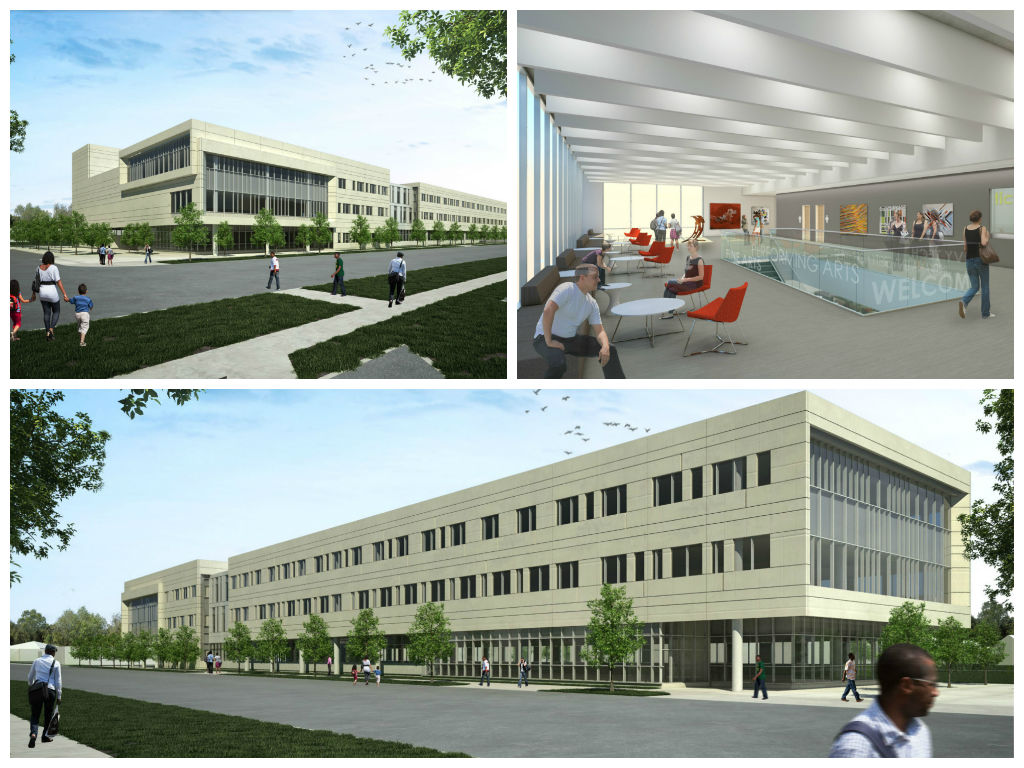 For IU Northwest, a cornerstone of the building will be a 500-seat performing arts venue and a smaller “black box” theater. Ivy Tech’s plans include developing a “one-stop shop” for enrollment and admission services. IU Northwest will occupy about half of the building, Ivy Tech will occupy about 30 percent. Shared classrooms, focus/breakout spaces and informal study spaces will be included in the remainder.

Last July, the Indiana State Budget Committee appropriated $45 million to IU for the project. With the IU Board of Trustees’ official design approval, the next step is to further refine design, create construction documents and gather bids for the construction. The building is anticipated to open in 2017.

The building will span most of a city block, making it a significant construction project, and signature building in the City of Gary and throughout Northwest Indiana.

IU Northwest Chancellor William J. Lowe said that, in addition to expanding the academic capacity of both the IU Northwest and Ivy Tech campuses, the venture will contribute substantively to the redevelopment goals of Gary, focusing on investment along Broadway. The building, central to the planning for the City of Gary’s University Park Plan, will serve as a cornerstone for redevelopment in the area.

“This partnership facility will be central to student, campus and community activity with its location adjacent to the IU Northwest campus, and just a few blocks from the Ivy Tech-Northwest campus,” Lowe said. “The building will be an asset to the two institutions, the Gary community, and the entire Northwest Indiana region.”

A joint facility also will likely improve the seamless transition of students between the two institutions as they seek to complete their associate’s or bachelor’s degrees, Lowe said, further strengthening the degree pathway from Ivy Tech to IU Northwest.

For Ivy Tech specifically, students will benefit from new science labs, computer labs and instructional spaces. Most of the courses taught will focus around liberal arts and sciences and will be transferable to IU Northwest.

“The new Arts and Science building represents a rare opportunity for two higher educational institutions to come together to design and build a facility that will deliver quality student learning experiences. This type of partnership focused on student success is what the community expects,” said Thomas Coley, Chancellor of Ivy Tech Community College’s Northwest and North Central Regions. “This building is about providing our students with 21st century learning experiences and supported with such services as Express Enrollment and an academic support Learning Commons where students engage with each other, faculty and staff. We are excited about the partnership and look forward to celebrating with IU Northwest the successful completion of building for the benefit of our students and the communities we serve.”

The facility will likely include academic and administration space for the IU Northwest Departments of Communication; Fine Arts; History, Philosophy, Political Science, and Religious Studies; Minority Studies; Performing Arts; and Sociology and Anthropology.

As well as academic and administrative space for Ivy Tech Community College-Northwest, with broad course offerings in liberal arts and sciences supporting the University and Transfer Division.

IU’s University Architect’s Office has been working directly with Moody Nolan on the project.