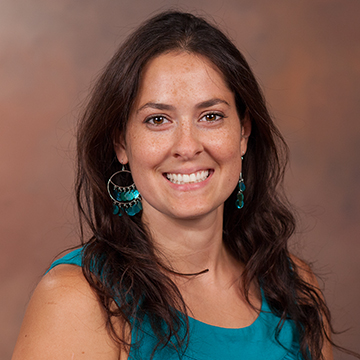 Indiana University Northwest Assistant Professor Tia Walker, Ph.D. has secured funding from the National Institutes of Health (NIH) to undertake a study that could potentially change the course of research on multiple sclerosis (MS), an unpredictable, often disabling autoimmune disorder of the central nervous system. An estimated 2.3 million people are estimated to suffer from MS worldwide.

Walker has been granted $45,000, a portion of a NIH grant that she will share with Leah Shriver, Ph.D., of the University of Akron in the total amount of $469,000. Researchers at IU School of Medicine – Northwest – Gary have received prestigious NIH grants, but the achievement is a first for IU Northwest.

Nelson De Leon, chair of the Department of Chemistry, Physics and Astronomy, said Walker’s achievement is doubly significant in that it will provide undergraduate researchers at IU Northwest – at least three hired over the next three years -- with training in advanced biomedical techniques and synthesis that are commonly used for drug development and evaluation.

“The ability to make contributions to the collective knowledge that ultimately moves science forward is happening here at IU Northwest,” De Leon said. “This is an exciting opportunity for our campus, and our students, to contribute to important discoveries about MS.”

Walker will be studying the link between myelin, the protective coating that insulates the nerve fibers, and copper-deficiency that leads to its degeneration. Understanding this process is critical because when myelin degenerates, it causes a disruption in the flow of information between the brain and body, leading to MS.

While there is currently no cure for the disease, most therapies focus on myelin regeneration. By seeking to discover new clues about the causes and underlying mechanism of MS, Walker’s research could lead toward new therapies to help regenerate myelin. If we can better explain how MS presents itself,” said Walker, “then we can change how we are studying the disease, allowing for better drug therapies.”

The Road to Discovery
Researchers have been studying myelin regenerative therapies using mouse models to treat the disease for more than 50 years. Mice are fed a toxin called cuprizone, which causes them to develop MS. A popular hypothesis as to why this happens is that cuprizone binds copper, inducing a deficiency that leads to demyelination.

“One idea for what is causing the degeneration of the myelin sheath is that cuprizone is binding to copper in the brain and causing the malfunction,” Walker said. “The question before us is, ‘what is the mechanism of this molecule? How is it actually inducing demyelination in mice?’ We know it does, but we don’t know how.”

In order to explore this, Walker created a synthetic molecule that acts very much like the copper- containing proteins found in humans. The synthetic model is easier to study, as proteins are sensitive to their surrounding conditions. Researchers have limited access to early and immunologically active MS tissues in any species, which is why they study the disease in mice and manufacture molecules in the lab. Walker’s molecule, called a ligand, when bound to copper, simulates the copper proteins found in the body.

The impact of Walker’s research could be significant to the future of MS research as a whole.

“If we understand how cuprizone induces the MS model, it means we can possibly understand what is actually happening in humans as to the degenerative process in MS,” she said. “Is copper being pulled out of proteins, creating a deficiency? Or is there is something else that we are not seeing that is causing the MS response.”