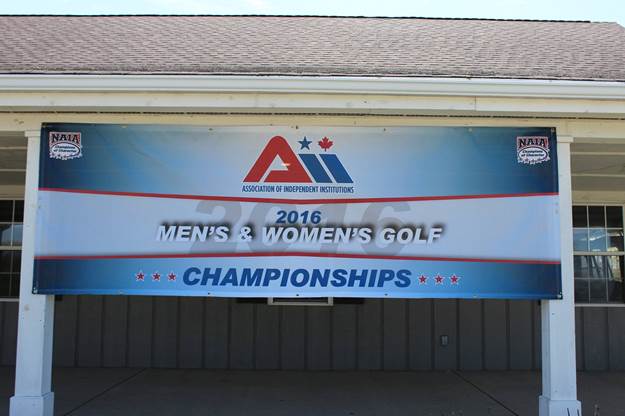 The Indiana University Northwest Athletics program played host to eight schools including two from Canada at The Brassie Golf Club for the 2016 Men’s and Women’s A.I.I. Conference Championships. The two schools from north of the border (University of British Columbia and University of Victoria) proved their dominance on both the men's and women's side. UBC won both titles while Victoria finished a distant second.

The weather was cold on day one, but it wasn't enough to cool off the UBC men's team. After firing -4 as a team in the morning session, they returned to shoot -11 in round two in tougher conditions. Sleeping on a 28 shot lead going into the final round on Tuesday, the UBC men did not let off the pedal posting another -4 round.

Evan Homes (70, 69,71) and Nathan Ollis (72, 69, 69) represented the University of British Columbia well and tied for the Low-Medalist Award, each posting an overall -6 for the tournament.

The women's side of the story has many similarities. The UBC women were also crowned champions after posting a +40, which was 28 shots better than the second place University of Victoria after 36 holes of competition.

There were some definite bright spots for the RedHawks first year program. "I think we put on a terrific event for the players and the coaches," said Coach Bishop. "The staff of The Brassie, our athletic department, and all the volunteers did a fantastic job with this tournament and it would not have been a success without everyone working together."

On the competitive side for the men Allan Korem placed 21st after shooting 81-81 the first day. Only to post a final round of 85 for a 54 hole total of 247. Our women's program had our highest placed finisher in Elizabeth Price. Elizabeth finished 13th with a two round total of 189. This is the last event for the golf programs, but the RedHawks will be back in action this August. "I am very proud of our student-athletes and how they performed this season. Both programs will be more competitive next season and I look forward to the season ahead."

Another highlight of the conference tournament came on Sunday afternoon, one day before the opening round. Jill McCoy (The Brassie Golf Club Professional) and Kristofer Schnatz (IU Northwest Executive Director of Athletics) organized a free kids golf clinic to promote both the game of golf and the NAIA five core values of Integrity, Respect, Responsibility, Sportsmanship and Servant Leadership. The NAIA Champions of Character Event is a staple at A.I.I. Conference Championships held throughout the country.

“We (IU Northwest) are proud members of the NAIA and we believe in the five core values” said tournament director Kristofer Schnatz. “It was great to see coaches and student-athletes from all over the country working with our kids from Porter County.”