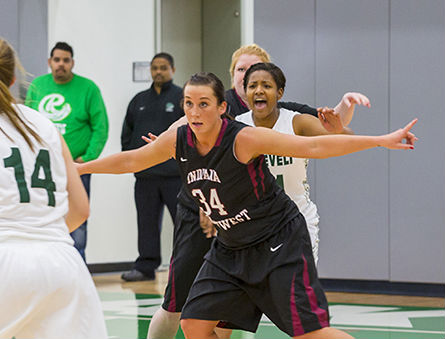 The National Association of Intercollegiate Athletics (NAIA) announced the 2014 Division II Women’s Basketball All-America Teams on Wednesday naming IU Northwest's Megan Holland as an honorable mention selection. Holland a 5'11" senior forward from Otsego, MI led the RedHawks to a 23-9 record and the A.I.I. Regular Season title en route to being named to the A.I.I. First-Team selection and A.I.I. Player of the Year.

Holland averaged 19.2 points and 8.3 rebounds per game while ranking second in the nation with a .592 field goal percentage. Holland posted a career high 38 points with 14 rebounds in a win over Robert Morris on Feb. 6. She posted 18 points and 15 rebounds in an upset win at #18 Purdue Calumet and earlier recorded 27 points and 8 rebounds in another upset victory at #20 Grace College. She started all 32 games this season for the RedHawks posting double-figures in all but two games. Holland also ranked in the top 50 in the nation in total rebounds and blocked shots.

"Megan's outstanding season and consistent high-level of play was the catalyst for the team's outstanding season. Many of her best performances this season came in our biggest games. On behalf of IU Northwest and Megan's teammates and coaches we congratulate her on this outstanding honor," said IU Northwest head coach Ryan Shelton. Holland is just second player in IU Northwest program history to receive NAIA All-American recognition joining Sharon Houston was recognized from 2009-2012.