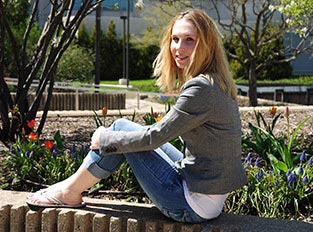 Students enrolled at any of Indiana University’s seven campuses have a unique opportunity during IU Northwest’s 2014 Summer II session to study abroad in China and learn firsthand about the country’s social and economic urban policies.

Offered at both the undergraduate and graduate levels, the course, “Urbanization and Transformation in China,” will include a weeklong trip to East China Normal University in Shanghai, where students will study and live alongside Chinese students in the university’s dormitories.

Made possible in part through a partnership with the Council on International Education Exchange, the course, which begins July 7, will be delivered in three parts: an orientation portion to prepare for the trip, the trip itself from July 25-31, and finally, time in the classroom to discuss the students’ experience and to complete assignments. The instructor is Associate Professor of Minority Studies Earl Jones, Ph.D.

“Our students must be educated about China,” Jones said, “because that is where many American firms have set up businesses and that is where investment is occurring.”

Jones said the global economy has a direct effect on local communities like Gary, which could stand to benefit greatly from international investment that could lead locally to more businesses, additional jobs, better education and ultimately, a higher standard of living.

“If places like Gary are going to thrive, the money has to come from outside,” Jones said. “This is exactly what happened in China. Global investment combined with government and private resources turned the country around.”

Jones said these are concepts he will cover during the course, as well as topics in African-Asian studies; Chinese contemporary history; the role of women in China; the education of migrant children; and social welfare and policy. As part of the cultural experience, the students will take a night cruise on the Huang Pu River, attend a Chinese acrobatic show and visit the Old City God Temple and Zhujiajiao.

In the future, Jones has plans to offer a similar course in Cape Town, South Africa. In the coming year, he will be traveling there to meet with colleagues and set up similar study programs there.

“Because of Chinese success stories, African countries are also looking to China as a model,” Jones said. “China is heavily investing money and technical expertise in Africa, the West Indies and South America. Young people have to learn about China, Africa and the global economy because it is the future.”

Registration and a program deposit are due on March 1, 2014.

For more information about Jones’ upcoming courses in China and soon, South Africa, contact him at (219) 980-6704 or ejones@iun.edu.