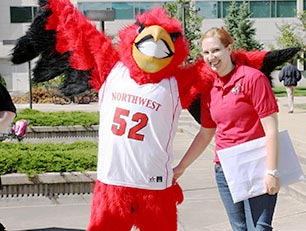 The Indiana University Northwest Alumni Association and the Offices of Alumni Relations and Student Activities are proud to announce the campus’s Homecoming celebration January 21 to 23, 2014.

Now in its fifth year, Homecoming at IU Northwest is a tradition that grows in popularity each year, with more festivities added for alumni to ‘come home’ and reconnect with former professors, classmates and colleagues. The events are also open to current students providing them with an opportunity to become engaged in their campus, and for the greater community to join in the excitement that is IU Northwest.

Events planned for Homecoming Week 2014 include:

Dowd-Higgins is the Director of Professional Enrichment for the IU Alumni Association and a nationally-known career expert.. She has authored the book and maintains the blog: This Is Not the Career I Ordered® which showcases her savvy professional development advice. Dowd-Higgins has a social media reach of 81 million and writes for the Huffington Post, America Online (AOL), CNN Money, More Magazine, and for The Chronicle, a newspaper in Indiana. She maintains a career and executive coaching practice and speaks nationally on professional development topics.

Raised in a working-class Caucasian family in a Chicago suburb, Fosberg discovered at the age of 34 that his biological father is African American. “Incognito” is Fosberg’s journey to uncover and discover himself, his roots, his family, and the difficult history behind the American complexity of "race".

Since 2001, Fosberg has performed “Incognito” throughout the country, inviting audiences to question and discuss their thoughts on race and identity. This special Martin Luther King, Jr. Day observance is sponsored by the Office of Diversity, Equity and Multicultural Affairs.

All IU Northwest alumni are invited to network with former classmates, professors and colleagues at this hors d’oeuvres reception. Alumni who attend will receive a free ticket to the Homecoming basketball games, which follows the reception.

There will be food served at halftime of the women’s game, and halftime challenges between current students and alumni during the men’s game. Tickets are $5 for IU Northwest students and $10 for all others. Tickets may be purchased at the game or in advance from the Offices of Alumni Relations or Student Activities.

The Savannah Center is located on the northeast corner of campus at 33rd Avenue and Broadway in Gary.